Only because he plays for Chicago. He is significantly bigger than Butler and way more skilled at same age. Where he is now is probably where Butler was at 23 years old as far as development.

And has a wingspan.. I love Jimmy and always will but imagine him with any sort of wingspan...

MrSparkle wrote:I see the limitations with his handles, but otherwise, his defensive awareness and shooting touch are amazing. LaMelo, Edwards and Hali are more flashy and polished today, but in the long-term, youâve got to feel confident in PWâs mix of athleticism, size, skills and smarts.

he has no limitations your watching hali who is a 2nd yr guard and comparing to a big wing forward.
jimmy butler, kawhi leonard were limited players during the same age.
God told Derrick to rise, so Derrick Rose.ï»¿
Top

Mk0 wrote:I am really excited to see him get a full offseason. These rookies are all really impressive with how little prep time they have had to get NBA ready. Maybe playing without a crowd has made the transition a bit easier? But as a whole they've been really good.

I have to say that so far this rookie class that was supposed to be absolute trash isnât looking that way. Itâs early and there is a lot of adjustment ahead as there is more tape on these guys but this class doesnât appear to be the bums they were labeled... so far.
Top

His defense on Lebron was very impressive, reminds me of young Butler on Kobe. The refs even gifted Bron a foul when there was clearly zero contact on a missed jumper. He's already the Bulls best wing defender which is both great and sad. I'm interested in seeing him play PF next to Lauri in spurts, they both are distance threats.

This draft class is looking like one of the best in a while, which is a bit ironic as it was considered a bad class.

Haliburton is the only rookie I would trade Williams for
Top

I was ticked when they drafted Williams. I didn't see special athleticism or production at Florida. I said before the draft, repeatedly, that Lamelo Ball is a basketball genius; that's who I wanted us to draft, almost regardless of cost.

That said, I'm coming around on Project Pat. The fourth quarter defense on Lebron was superb. Deflections, steals, forced shots. Lebron was hitting stupidly difficult shots in the first half but a generational player will do that...to literally anyone. That "and-1" is an offensive foul if Pat falls down, because it was absolutely on offensive foul. I like his touch, strength, ability to get vertical off one or two legs. He's laterally much quicker than the quadriceps-crowd would have you believe. He may not have any individually special athletic traits, but the combination of traits is rare. Most of all, the kid is serious and focused. He's going to be a valuable NBA player for a long time.

That said, I have concerns. He does not show aggressiveness in any facet of the game...yet. His shot is glacially-slow...for now. He does not attack close outs by getting to the rim and drawing fouls...yet. He also lacks an iso game, which you need if you are to achieve stardom.

So...cautiously optimistic? That's where I am right now. Regardless he seems like a really good kid, and I'm pulling for him.
Top

He's calm like a vet, and probably already one of the league's better defender. How can Bulls fans not get excited that he's still 19, already has an NBA body, big hands, and seem to have no problem playing in the NBA as a starter. Who knows how good he's going to become, I mean big jumps in development like what happened to Giannis, Kawhi, Jimmy is also mental, BBall IQ, and hardwork, and this is difficult to predict. Worse comes to worst this is already Patrick's floor. It's good, he certainly has all the raw qualities of high potential 4th pick, but he's still a long way from justifying his draft position and reaching his ceiling.
Top

Like most of us I did not even believe he would be in play for us. If he turns out to be as good as it is looking like, our organization has been fundamentally changed. Sure pat will turn out to be a great player form the Bulls, but the massive change is a talent evaluator that can snatch a player like Pat out of all the noise that was that draft.
Next time the cult's spaceship lands we'll all be wearing black Starburys.

Only because he plays for Chicago. He is significantly bigger than Butler and way more skilled at same age. Where he is now is probably where Butler was at 23 years old as far as development.

Let me make it clear, if it is not already, I'm not comparing the two just that I've seen other people (some on this board) compared Williams to Butler.
Â¯\_(ã )_/Â¯
Top

Ready to see Pat get a slightly larger offensive role. Especially if Otto's out for more games.
Top 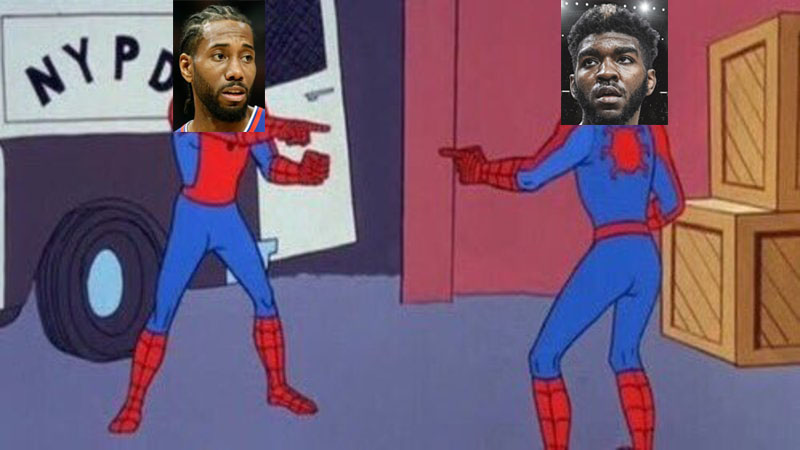 The quest for #7
Top

Fastbrk4brkfast wrote:Ready to see Pat get a slightly larger offensive role. Especially if Otto's out for more games.

As an OG Pat fan (OG as of when KC broke the news that the Bulls liked Pat) I approve the hype that will only grow from here.
Top

When your idols take the time out to encourage you that is a very good sign.
Top

This kid is the future.

Iâm calling it now... Kawhi signs with us this summer to win with his protege!
Top

It really is borderline creepy how similar they looked like one another out there. They even stand, walk and run the same way.
Once a pickle, never a cucumber again.
Top

It really is borderline creepy how similar they looked like one another out there. They even stand, walk and run the same way.

He's already better than any of the old regime's draft picks still on this roster. I'm for the tank but I'll make an exception if they end up winning games because it turns out the unheralded rookie they drafted is way better than anybody expected.
Top
Post Reply
116 posts