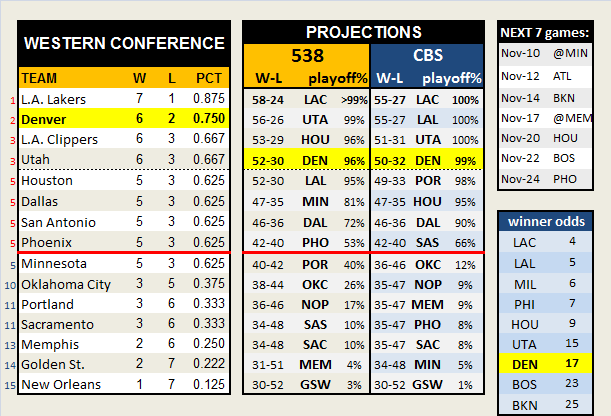 Nuggets are 2nd right now, but the bad news is that all other main contenders for the WC title performing well except Houston. If we count schedule factor, and important injured players like George, the real WC standings looks so far like #1-LAC, #2-LAL, #3-UTA, #4-DEN, #5-HOU...

But Jokic, and our bench too, can arguably play better than this. 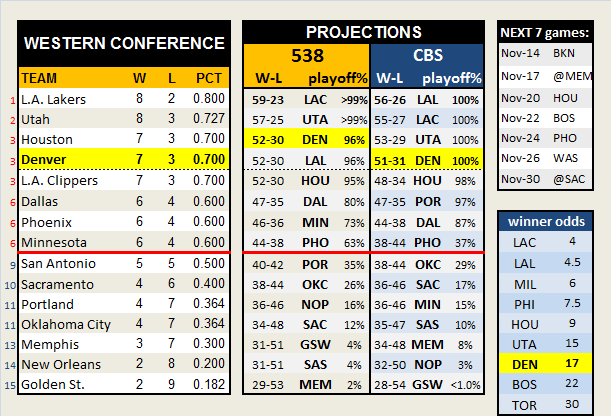 Looking at our losses this season so far where 2 out of 3 coming against underdogs lottery teams, and the fact that we have currently a better record on the road than at home, our November schedule is actually very hard

I wonder if Melo has figured out that he is a bench scorer yet? If he has Portland could be a problem.
Top

WAtching this Memphis Utah game, I think the Grizzlies are going to be a problem in a year or two. I think Morant is better than Mitchell right now and I really like JJJ. I think they have a couple of decent role players as well, 1 more piece and some experience they will be damn good.
Top

As of Nov 24, the Golden State Warriors have the worst record in the NBA. I thought they would have a drop off but not to this extent.

Now i wonder if this is the old Spurs tactic to tank for a high draft pick.
Canned in Denver.
Top 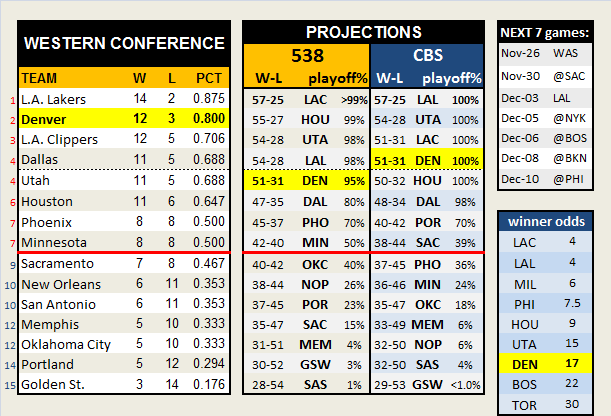 2nd best record on West and 3rd best record in NBA are expected scenario after 15 games considering Nugget's quality and depth, and easy schedule. We are also bold favorites to win both remaining games in November.

But the December schedule will be much cruel, especially at the start. In the first 5 December games, we will play vs Lakers at home and vs Boston and Philadelphia on the road. We are the TOP8 team in the NBA for sure, but are we belong to TOP5 will be more clear after these 3 December games.
Top 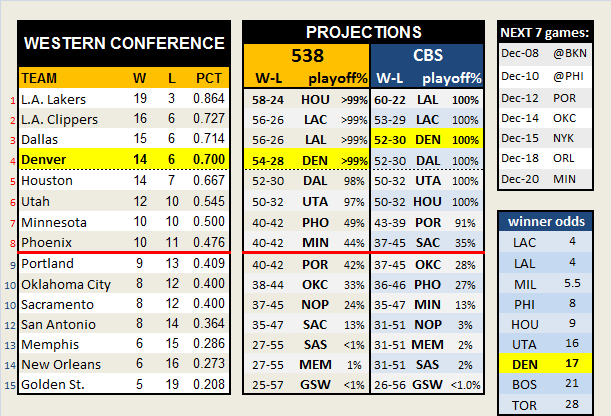 Denver has 13-3 start, one of the best starts in franchise history, but we all know team not playing that good at all, and that big part of such record is almost perfect November schedule. Now with 14-6 record, we are more close to our current reality. If we beat the next away game Nets, I see Denver with NBA TOP5 record at the end of the calendar 2019 year, because after tough Sixers game we will have 5 home "must-win" games vs under .500 teams (please, don't remind me on Pelicans, Hawks, and Kings game

14-7 ain't a bad start at all, but only if we ignore the fact that Nugget's schedule in the first quarter of the season is almost perfect. Believe or not, but Nuggets game vs Celtics in Boston is the only ones so far (out of 21 games!) where the opponent team was favorite to win according to bookmakers!? 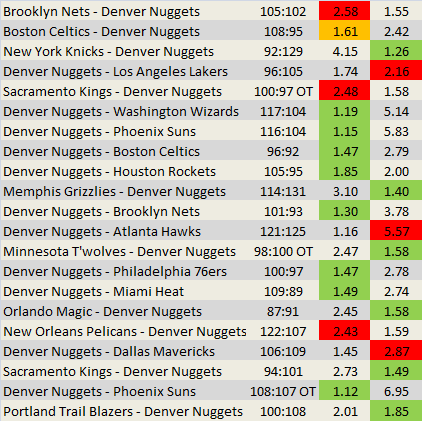 Who would have thought:
Both
Dallas in 3rd place in the West
and
Phoenix in a playoff position?

Utah is warming up... 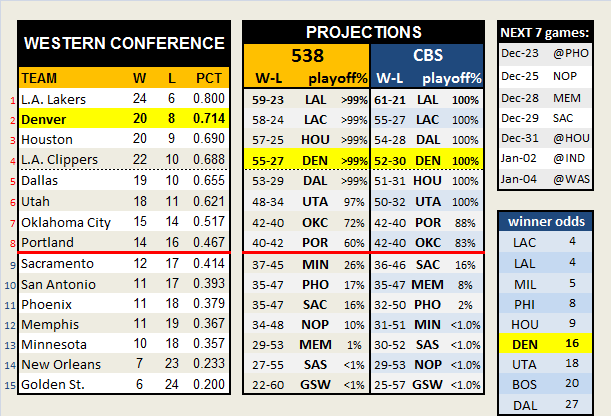 Personally, I don't see any reason to stop this winning strike before 10!
Top 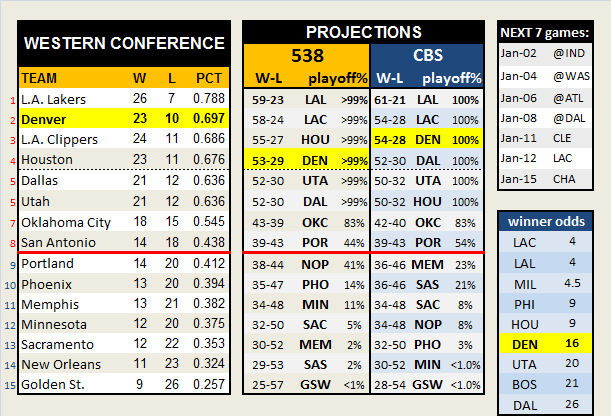 2019 calendar year is over, and despite it is arguably one of best years in Denver Nuggets franchise history, I will rate it A-.

For A or A+ we needed to win that game 7 vs Portland, and despite this half-season record 23-10 is great, I expected even better considering our very friendly schedule for these three months.

Talking about players in the current season, Jokic again has a slow start, but this time is not Malone to be blamed. The good news is that again at some point in December up his game on the next level. Murray's start of the season is promising, but for some reason instead of to rise in December his numbers fall for some reason. Let's hope it is just temporarily mini-slump. When both our max guys are in good shape (Jokic in MVP-contender level and Murray in all-star mode) Denver is almost unstoppable.

In starters triangle Harris-Barton-Millsap unexpectedly Barton has best numbers so far, with this November being his career-best month. Millsap skills at 35 are not close to what he is used to be just a few seasons ago, and he is limited on 25mpg, but somehow he improved radically his shooting efficiency (3p% and FT%) so he is on some way actually more useful than expected. Gary Harris slump in offense from previous season unfortunately continues, but he becomes league TOP5 (if not TOP3!) backcourt defender!

Feelings about our bench so far are mixed. Denver is one of the deepest teams in the league, but sometimes our bench underperforming badly. Plumlee would be starting center in at least 10 NBA teams, and his production is good and expected, as well as his limited playing time because of Jokic. Grant was a big disappointment before December. It is not just because new team, but such type of player needs to play with Jokic and Murray to get all benefits from his play without the ball which includes open 3pt shots and sneaky dunks. In December Grant TS% was impressive 63%, a team-best, but just 52% in October and November. Beasley didn't extend his contract, Malone reduced his playing time to just 15mpg, and he dropped his FG% from last season, but he is a good player, let's hope current problems will be solved. Morris was in a slump during a playoff, but he is back this season with his great efficiency (AST/TO ratio and 3p%).

Out of players which not playing enough (12mpg or less), I think Cancar and JV better to play in the G-League, our forward line is too stacked. Talking about G-League it is shocking to see Bol Bol already playing, so we definitely have another draft steal this summer, and we should be happy about PJ Dozier too. Craig overperformed in the playoff, his 3p% numbers in the postseason were just small-sample anomaly, so as a one-dimensional player (defensive specialist) and with Barton good (over)performing, his reduced playing time is expected and logical. While Craig bad FG% is not surprising, in Juancho case I'm very disappointed after his great summer with Spanish NT.

I will finish this 2019 report Michael Porter jr, but for sure not because least important thing there as his playing time suggesting. In his case even such a small playing time sample is enough for a bold conclusion: MPJ is healthy, and MPJ is a real deal!
Top 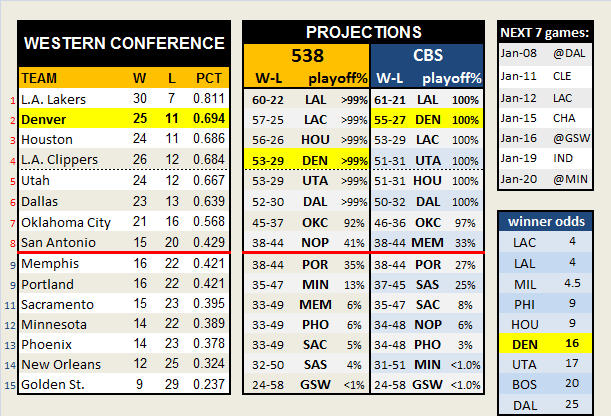 Dallas, Clippers, and Indiana in the next 7 games, plus Houston twice, Utah and Milwaukee until the end of January, are all good playoff teams, so we will learn much about 2020 Nuggets in the next three weeks. So far we are 7-5 vs over .500 winning teams, but 12 games are a small sample, with upcoming 7 in January, the picture will be more relevant after 19 such games. Compared to the start of the season where we have a much easier schedule than in the upcoming period, the offense is clearly better but defense is down, Jokic is in better shape, but other starters not improving or even declining, while on the bench we have MPJ now as a permanent contributor.
Top

What a mess on the West between #2-#5 with 4 teams have exactly 12 loses so far (DEN, LAC, HOU, UTA). In today's game vs Clippers will be decided between these two who will be tomorrow #2 and who #5.
Top

THE J0KER wrote:Dallas, Clippers, and Indiana in the next 7 games, plus Houston twice, Utah and Milwaukee until the end of January, are all good playoff teams, so we will learn much about 2020 Nuggets in the next three weeks. So far we are 7-5 vs over .500 winning teams, but 12 games are a small sample, with upcoming 7 in January, the picture will be more relevant after 19 such games. Compared to the start of the season where we have a much easier schedule than in the upcoming period, the offense is clearly better but defense is down, Jokic is in better shape, but other starters not improving or even declining, while on the bench we have MPJ now as a permanent contributor.

After beating Clippers today, Denver has NBA best record vs over .500 winning teams!
But our h2h vs league-worst under .350 teams is ridiculous. 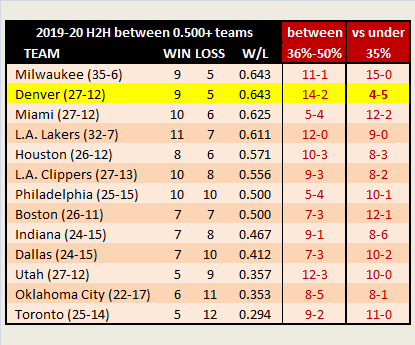 THE J0KER wrote:
Spoiler:
After beating Clippers today, Denver has NBA best record vs over .500 winning teams!
But our h2h vs league-worst under .350 teams is ridiculous.

"...Josh Richardson and DeMar DeRozan have been named the NBA's Players of the Week for Week 12.