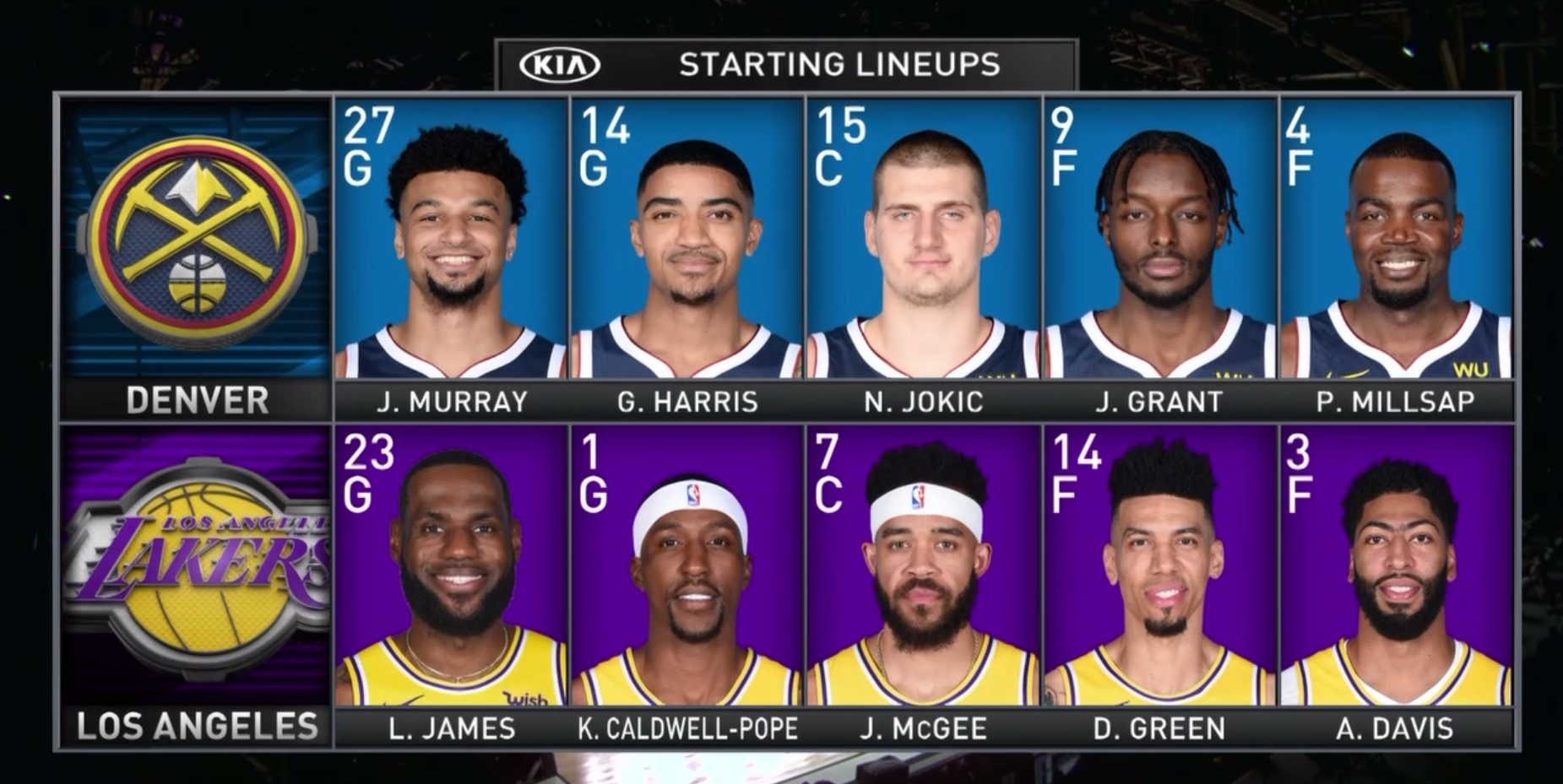 The third game after 0-2 is always a "must-win" game, even for the Denver comebacks Kings 0-3 vs arguably league-best team would be too much.

Lakers strategy is clear in this series, and they will not change anything. In Denver's case, the only obvious change which should be made without thinking is to upgrade Porter minutes from under 25 to over 30 (if not over 35). Scoring is not the only reason why we need him more, it is rebounding too (in game#2 in which he played only 19 minutes Lakers outrebounded Nuggets 44-31). We talked about how this is tough series for Jokic and Murray, but as I said before, the Lakers are actually the worst matchup for Gary Harris, because they have no player where Harris defensive skills will overshine his offensive problems from the past two seasons. But I'm not sure what should be done about that, because he is still our most useful backcourt defender there, Morris is more efficient in the offense, but his defense is questionable even vs opponents 2nd unit. Dozier can energize the team in a good way, but his efficiency is bad in general (not good TS%, too many TO's). Maybe is Barton the solution, if he is ready, but I'm afraid of his eventual negative influence on Murray and Porter offense.

The other bad thing which we should to fix if we want to win this game and maybe even the whole series is poor 1st half performances time after time. Everybody talking how good is Denver vs both Los Angeles (super)teams in 2nd half and at the end of these games, but let's talk about what is wrong with Denver's games before halftime. In the last 6 games, results on halftime were always on the opponent's favor (50:60, 59:70, 54:56, 47:63, 44:56, 40:48), in most cases in double-digit. We won 3 of these games (almost 4), but this must stop. In half out of 16 playoff games so far in 2020 opponents have a double-digit lead on halftime!? Looking at the other conference final participants, the Lakers and Celtics didn't face so far any 10+ halftime deficit in this playoff, Miami only twice!

Denver is the best so far in "DO OR DIE" games this playoff, and despite technically this is not an elimination game, in reality, it is... so let's hope Denver will do it again!

Grant can cover SG in defense, but not playing SG in the offense for sure, so such a lineup in the offense can only work with Jokic literally playing point guard, which would be a too much exotic experiment for conference final series.

If you want to put MPJ in the starting lineup and write-off Harris, the basic solution is probably Murray-Craig-MPJ-Grant-Jokic, with Grant guarding AD and Craig LBJ. But if AD playing center Jokic can guard AD and Grant LBJ where several options can be used instead of Harris (Morris, Dozier, Craig).
Top

We can win this

Nice aggressive 1st half but I expect the Fakers to come out swinging in the 2nd, need to stay focused.
When your days are grey, and your nights are black, it's just different shades of mundane !
Top

So refreshing to see Nuggets not waiting 2nd half to start playing in full force. Great decision from Malone to prolong MPJ and Morris time and role in 1st half.

+10 on halftime should be enough. What makes key difference is much better Nuggets rebounding.
Top

When your days are grey, and your nights are black, it's just different shades of mundane !
Top

Great win and great energy from the very first to very last minute, except in these 5 minutes in the final quarter when we have 7 turnovers one after another so Lakers make a 17-2 run.

This game show how powerful will be Denver in the near future if we create a superteam with BIG3 (Grant with his PO career-high played like a true two-way star). I believe MPJ is capable to be that third star. Another who deserves to be mentioned is Monte Morris.

Sadly Murray didn't achieve triple-double which would be another proof of his breakthrough.

44-25 in rebounds in Nuggets favor are probably the key stat for tonight with Grant 26 points.
Top

While I enjoy the win, there's part of me that feels like this is a further NBA manipulation just to extend the series a bit longer, make it look less obvious that the fix is in.

Murray looked strong again, Jokic being Jokic. Very nice game by Grant, he's established himself as priority FA Numbero Uno !! I agree with Joker, MPJ still looks like he is gonna turn into a prime-time player but he's not there yet.
When your days are grey, and your nights are black, it's just different shades of mundane !
Top

Fakers are a dirty team and refs still allow LBJ (in particular) gets away with a lot of junk on both sides of the ball. But he does appear to be losing his battle with Father Time. Just about to turn 36, will be glad to see his manipulative-ass out of the league. Tremendous talent but if he's the face of the NBA, it's time to pass that torch IMO. !!
When your days are grey, and your nights are black, it's just different shades of mundane !
Top

Man that 4th quarter run by the Lakers (entirely on transition points!) shaved a few years off my life... it was a good thing we didn't go cold.
Top

I have seen both LeBron and AD extremely fatigated in the last minutes. Playing every two days might be in our favour, Nuggets are younger and are already used to that.

Rebounding was the key tonight, and Malone kept Jokic in the bench a bit too long in the fourth quarter, as usual.
Top

MVP Grant had a great game. Looking for our biggest negative: Too often our guys pass up open shots - but that starts with Jokic and it's just the team's attitude in general; so not much of a negative.

Except for that 4th quarter run; this might have been the best game the Nuggets have had in the playoffs - well, at least against an LA team (a couple of games against Utah might have been better IMO).
Top

Only Lebron can tackle a guy and not get a foul called. The reffing during that 4th quarter run was terrible.

About time Grant showed up, it had been a while.

I like that Murray is still thinking about the mistakes and thinks he can do better, he likely will.

The rest the Lakers got between series is finally wearing off, they were dying after their 4th quarter run and most of the Nuggets were fine.