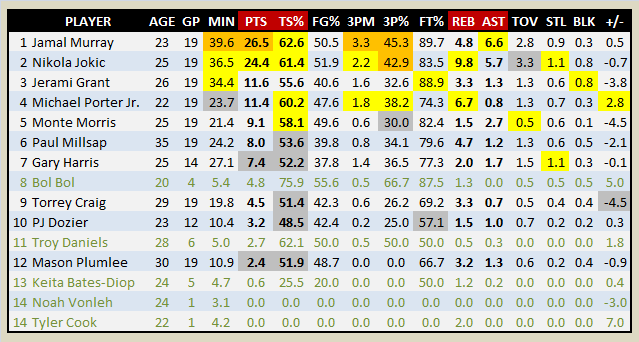 Nikola Jokic - NBA best center 2nd (post)season in the row. He has some energy problems which damaged his rebounding and playmaking since the start of the bubble restart, but I blame COVID19 for that, not weight loss. (A+)

Jamal Murray - 2020 NBA playoff individually best story and his series vs Utah is epic and historic. Murray rises into a true all-star player this summer. (A++)

Jeramy Grant - the only move our FO do to improve roster pays back. Even if we do not re-sign him this summer this single playoff is worthy of our late 1st rounder! Jazz was a bad matchup for his two-way skills, but against LA teams he clearly rises into our 3rd best player (A-).

Michael Porter jr - he comes into the playoff as the all-bubble first team, finished this playoff as a Nuggets player with the highest +/- and his numbers per 36 minutes are 17-10 great for some rookie (with good percentages). Why he played just 23 minutes per game is not his fault. (B+)

Gary Harris - he missed the opening 5 games vs Jazz and was pretty useless in the Lakers series because of the bad matchup, but I will put him as our 5th best player this playoff because of the importance of his defense in the Jazz and Clippers' series comebacks. (B)

Paul Millsap - his numbers are not that awful, but only if we ignore the fact that his salary is $30M, with LBJ and CP3 the only 34+ veteran in this playoff with such salary. But he is not only far away from LBJ/CP3 in production, but even some old players playing on veterans minimum outperformed him (including Howard and Rondo from the Lakers series). (C)

Monte Morris - a matchup vs Utah was a nightmare for his defense, but in both series vs LA teams (Lakers especially) his efficiency shined (TS% and ast/to both). In the 2019 playoff he was totally out of shape but this season he proved himself as a trustful and helpful backup option, despite huge problems with defense. (B-)

Torey Craig - he clearly overperformed in the 2019 playoff which I guess helped Malone to overestimate him, despite we talking here about 29y old veteran with obvious limitations. But he is still a better player than his salary is. (C-)

PJ Dozier - he used very well his opportunities for some two-way contract player, but he needs more NBA experience and to work on his efficiency. (C+)

Mason Plumlee - like in Millsap case, his production is not that bad per minute he plays (for a backup center) but because big salary and that AD-winner mistake, I will downgrade his final grade. This is another season where he is underperforming in playoff compared to the regular season, so he is not a player for a contender team (D+)

Coach Malone - improved as a coach for sure, but still equally stubborn, and not TOP10 coach in the league, which is a big problem for a team which targeting ring. (B)

Joker, I'll agree with most of your grades and most of the differences aren't that significant.

Porter might be a B- but since he's a rookie, I don't object to your B+.

Harris deserves a C in my opinion. He is truly fun to watch on defense, but without the offense of a couple of years ago, he's hurting our offense too much.

I'd drop Millsap to a C-. He's paid a lot of money to be a veteran that can provide some stability but his game was exposed in the playoffs on both offense and defense (defense not as bad).

I'd give Morris a B+ instead of your B-. He can play either guard and is quite consistent. Everyone struggles when they have to cover Donovan Mitchell and watching these playoffs has convinced me he is our second best guard.
Top

Don't know I'd give individual grades, we all saw what happened, more of a ref's INCOMPLETE but as a team I'd give them an A-
When your days are grey, and your nights are black, it's just different shades of mundane !
Top

skywalker33 wrote:Don't know I'd give individual grades, we all saw what happened, more of a ref's INCOMPLETE but as a team I'd give them an A-

As a team, we have arguably NBA 3rd best playoff run this season, right behind Lakers and Miami. Our win vs Clippers are together with Heat's win vs Bucks the biggest story of this playoff, and the improvement of Jamal Murray was individually the best breakthrough story of the 2020 NBA playoff. If the Lakers beat Heat 4-0 or 4-1 we can say our resistance to the Lakers is still strongest than from any other team this season. They beat Portland and Houston 4-1 too, but all Lakers 4+4 wins in these two series (+ both wins so far vs Miami) were routine wins but against the Nuggets one of the wins was after a lucky buzzer-winner and one of the wins was after the tied game. So yes, the whole team as a team deserved at least an A-.
Top

Millsap gets an F- for staring down Mitchell after a block and then getting a 3 drained on him the very next play.
The other thing I remember was that AD shot the lights out as soon as people brought up how well Millsap was covering him.

I can't grade Plumlee negatively without glancing over at Jokic being in foul trouble for a couple of major games in the Lakers series. Even with his improved conditioning, I'm guessing the 14+ postseason games thing wasn't doing Jokic any favors either. We just saw how Vogel trusted AD even with 4 early fouls to play through his minutes, and I wish Malone had done the same.

Gary could play better (a lot better) but I can't say he really lost us games. Murray and Jokic being superweapons carried a lot of dead weight on offense.
Top

This the best Nuggets team that I have seen, ever. That's all.
Canned in Denver.
Top
Post Reply
6 posts • Page 1 of 1