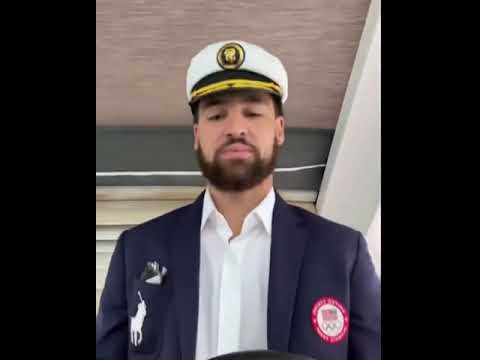 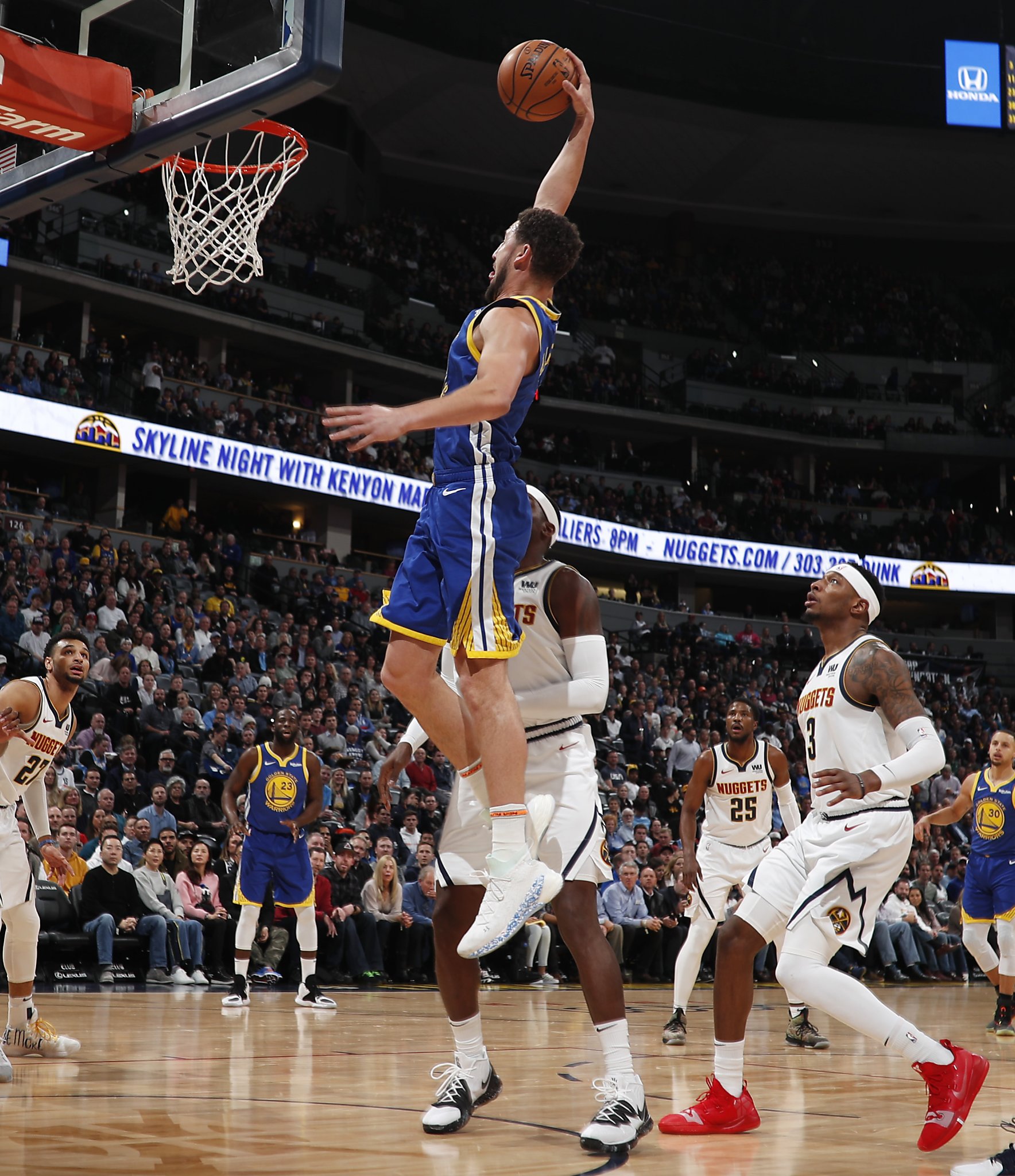 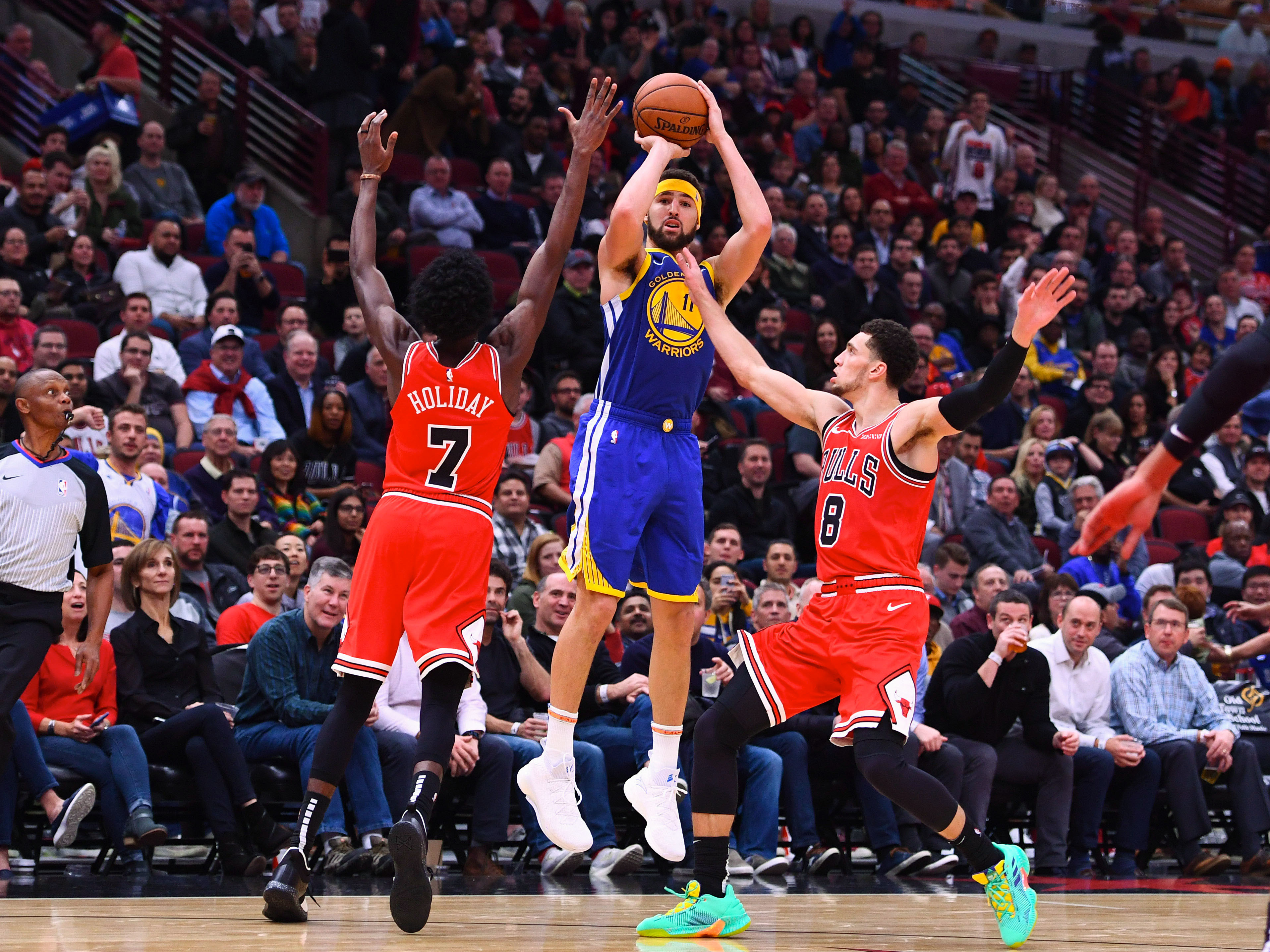 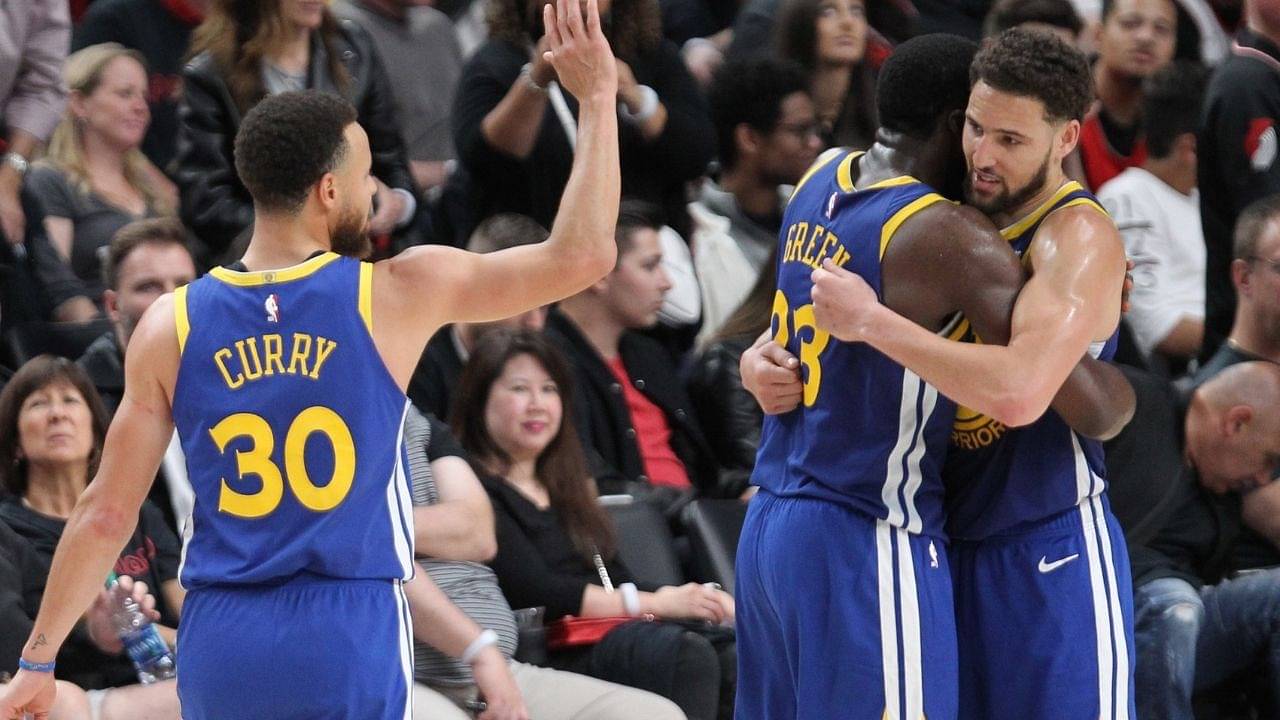 Tacko Fall 2 way player that we should Trade Ciozza and something for.
Give Wiseman a very big slow inexperienced guy to practice against.

Basketball-Reference calls Lauri Markkanen and Lamar Stevens power forwards. This is Markkanen's first year playing small forward. He was hitting 3s at 40% last year when he was a power forward but now he only hits 3s at 30% probably because small forwards are better at closing out on 3s. Basketball reference usually has a clue what you're talking about if Lamar Stevens is really a second-year power forward starting at off-guard then attack him on defense.

If I was Kerr I might start Iguodala with Klay, Looney, Dray and Steph just so everybody knows how to play with Klay. Wiggins and Poole can come in early.

Wiggins as a back up puts extra pressure on the defense which might help Poole get off to a good start in his future role of toasing back-backups. Is Rondo still playing good defense? Peak Rondo could have created some problems for Poole.

Or we could put GP2 on Garland and then give the Cavs a taste of what the small ball We Believe 2008 Warriors did to Dirk and the number 1 seed Mavericks. If Payton neutralizes Garland can the rest of the Cavs create any ball movement under pressure?

Now in honor playoff game threads of years gone by, here are your Korean K-Pop girls
From the number 1 current K-Pop girl band I present "blackpink" (I know nothing about K-Pop except that blackpink is the number one girl group now) Number one K-Pop girls for number 1 NBA team. 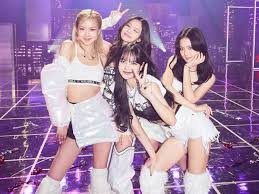 Because the "blackpink" images were not quite risquÃ© enough here is one of them doing a Calvin Klein underwear advertisement. She will have to do as our good luck girl. 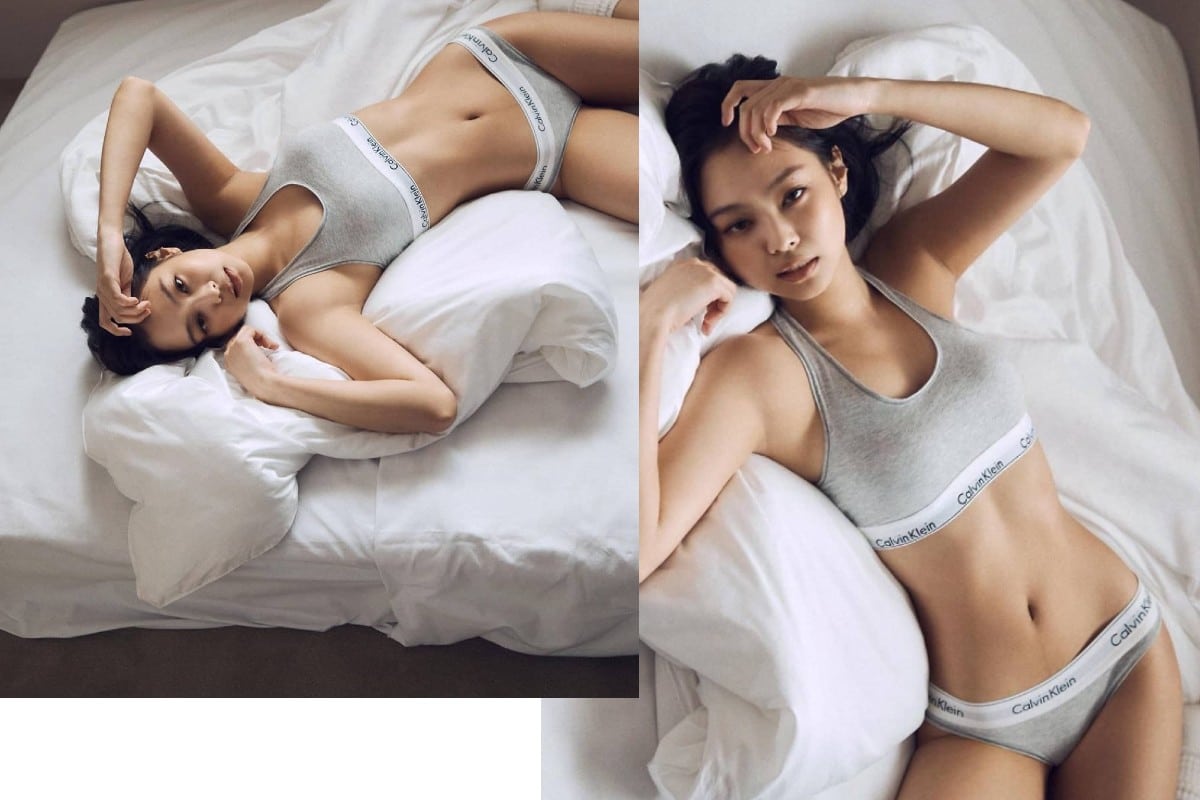 Prediction, Klay will be fully healthy by playoff time and will be more locked in and focussed than ever berore. Klay's energy will be contageous.
The Warriors will destroy the competition. Wiseman will give us 10 good minutes a game as a back up center. Wiseman will be a mixture of great and stupid but the great plus stupid bas will average out to 10 good minutes per game.

The biggest threats to Steph getting his finals MVP come from Dray and Klay not the rest of the NBA.
Had a few Warriors hit some shots they normaly hit in game 7 of 2016, the Draymond would have been the 2016 finals MVP.

And LeBron haters would be talking about all the shots LeBron missed in game 7. They would be saying how un-clutch LeBron is despite LeBron dragging his team to victory by getting to the free throw line over and over again. And LeBron fan boys would not be able to say LeBron beat the 73 win Warriors who the hell did Jordan beat. Jordan beat great teams but LeBron fan boys don't want to hear that.

And Curry doubters would not be claiming that Steph can't win without KD. KD was injured and the Warriors were equal to the 2019 Raptors until Klay wen't down. Quin cook and one injured Cousins were **** 2nd and 3rd options. The current Warriors even without Klay would have beat the 2019 Raptors desptie Kawhi playing great. I hope Steph gets finals MVP this year but if Draymond averages a tripple double or Shuts down Giannis or KD or if Klay averages 40 points a game Steph might not get that finals MVP.
Top

The Dubs I think will need to treat the game seriously rather than getting too caught up in a premature Klay is back celebration. The Cavs will be looking to play spoilers. They were in a commanding position to win last time but then Steph went off. Another interesting story if I am not mistaken is that this will be the first time Mobley will be playing against the Warriors. Their height will be bothersome.
Top

Can't remember being this excited over a RS game in a very long time!
Top

WarriorGM wrote:The Dubs I think will need to treat the game seriously rather than getting too caught up in a premature Klay is back celebration. The Cavs will be looking to play spoilers. They were in a commanding position to win last time but then Steph went off. Another interesting story if I am not mistaken is that this will be the first time Mobley will be playing against the Warriors. Their height will be bothersome.

Big ball vs small ball tonight. Allen Mobley vs Looney Green. They are a tough team and they play hard. Overall I think the talent level on the Warriors will be too overwhelming for them.

With Klay back that just pushes Poole to face their second unit. Hopefully the starting second unit will be Poole GP2 Iguodala Porter Bjelica. Thatâs too much for other teamâs benches to deal with. And thereâs still Kuminga JTA and Lee to push the other team even more. Just attack the other teams in waves.
Top

Who knew Gatling was a Blinker? Learn something new everyday. Mr. Moose will be proud to see this thread.

Quazza wrote:ALL FUTURE ERECTIONS WILL BE NAMED KEVIN FOR BEING SUCH A STAND UP GUY

From hereafter January 9th will be celebrated as Klay Day.
Bob Meyers, June 7, 2018: "âItâs not in my job description to please NBA fans. Itâs to win, end of story. I donât need to be entertained, I just need to win. Thatâs all it is. Thatâs all I was hired to do. Win.â
Top

We shouldn't be doing these game girls anymore. I think I will confiscate all such pictures for future evidentiary purposes.
This movie is like the Rocky Horror Picture Show where everyone knows all the lines.
Top

End of the layoff, start of the Klayoffs.
This movie is like the Rocky Horror Picture Show where everyone knows all the lines.
Top

Tough matchup for us. The Cavs are fricken huge.

Little Digger wrote:Can the Warriors file a lawsuit against Oubre?

and1GS wrote:Who knew Gatling was a Blinker? Learn something new everyday. Mr. Moose will be proud to see this thread.

Lol man you may want to urban dictionary that one
Top

They need a win and there's no excuses for this game. Everyone is healthy and well-rested and they get Klay (in whatever form) as a bonus. If Steph is still off in this one I'm going to start worrying, and hopefully they just let Klay get what he gets in the flow of the game instead of trying to force it to him, because he'll have a lot of attention on him.

Tough matchup for us. The Cavs are fricken huge.

They are big. We have to stop them from offensive rebounding but.....
Against the Blazers the Cavaliers started what Basketball Reference considers to be 3 power forwards, a center and a point guard. If the Warriors can get the ball out of Garland's hands I have doubts about the other Cavaliers ability to pass the ball.

I watched some Penn State film of the Cavs Starting off guard Lamar Stevens and he looks like a poor man's Corliss Williamson. Other places consensus on Lamar Stevens is that he is a 3-4 tweener. He is shooting TS% 46 which is bad. His offensive game is power driving but he isn't so powerful that Draymond can't handle him. He might be a bit smaller and faster than Corliss Williamson but I don't think he has Williamson's level of skill. If Garland uses Stevens as his bailout guy when trapped I don't think Stevens will be capable of setting up the other players. Then they have Osman their shooting small forward but he also does not seem to be a passer. The Windler guy can pass a little bit but the Cavs don't like playing him. That leaves Kevin Love as the only other guy that can pass. Rondo can pass but he just joined the team and does not know his teammates. Rondo will probably only play when Garland sits.
Top

I hope Klay got a haircut today before this one.

Little Digger wrote:Can the Warriors file a lawsuit against Oubre?

Lol man you may want to urban dictionary that one

It has a clear/real meaning in this context. Urban D not involved.
Top

In other UD news.... https://www.urbandictionary.com/define.php?term=klayup

Some Klay bets for those so inclined. (Sportsnet)

It should be.... A layup NOT made by Klay Thompson of the Golden State Warriors.
Top
Post Reply
153 posts