Clippers are in search of a new coach. They need one who:

Too many coaches, too many pros/cons, too much at stake. And only one chance...

But here's the greatest fear: what if they can't find that perfect coach?

Because of the 3-1 collapse, every player's market value is at their lowest, so pretend that next season is the same roster as now: all players re-signed, no trades, whatever pick they get will be stashed for salary reasons. If this roster is incompatible with every single coach out there - even if it's Lue, Cassell or Billups - would you blow it up? Would you trade all your players, including Leonard and George, for picks and rebuild?

Doing this puts the Clippers back in the tank and into the drudges of the lottery, a well familiar zone. But it'll be under a new coach sans the influence of Doc Rivers. You sacrifice the win-now year for a much longer and healthier window as opposed to being forced to win now to prevent the franchise from entering what many are calling this a decade in the gutter, if not longer, possibly double. In other words, miss the playoffs for a year instead of missing it for 10 to 20 years.

Given this worst case scenario, would you still go for broke?

You don't necessarily need to blow it up. You just needed someone that can take the current pieces and make them work better. Maybe a coach that realizes Trez isn't a center and stops using him like that. Or, a coach that realizes you don't put multiple bad defenders on the floor together in the playoffs.
Top

A fire sale would be such a gut punch
Top

This is a good game theory type of question.

Given your scenario, my answer is still no to blowing it up. The downside of trading all assets would be less since there's no risk of losing 2 best players to free agency, but IMO the overall odds/ROI/whatever still favor trying to maximize a Kawhi/PG led team and hope to re-sign them after next year.
Top

madmaxmedia wrote:This is a good game theory type of question.

Given your scenario, my answer is still no to blowing it up. The downside of trading all assets would be less since there's no risk of losing 2 best players to free agency, but IMO the overall odds/ROI/whatever still favor trying to maximize a Kawhi/PG led team and hope to re-sign them after next year.

Catch-22. If you don't blow it up, you return the same flawed and clueless roster that choked when the chips were down and then quit like dogs....and you lose Kawhi and PG.

If you blow it up, you're probably not going to gel as a contender and you lose them anyway.

I think the question at the moment isn't who to add but who to subtract. Not only do Trezz and Senior want a LOT of dough but do you really want them at all? Lou and Bev are signed but do you want them either? Or do you do the same thing as last year and hope that Ty will magically deliver better results from the same horses?

I'd say some combination of those four--or all 4--need to be dumped, even if only as change for the sake of change. 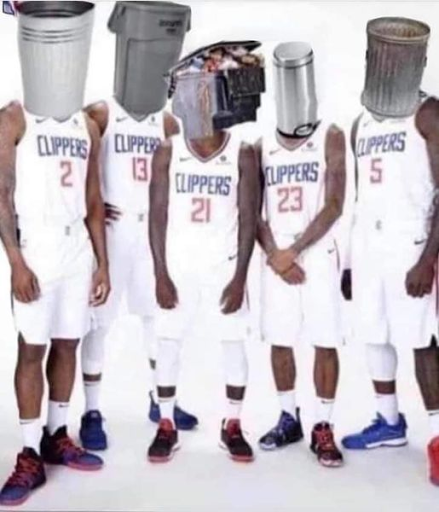 Blowing it all up means that all those draft picks were wasted.

I hope Ty gets a chance with the personnel he has. Agree that some of the disappointing players should move on unless their price is so low we can't do better. I still think Montrez' price has to have dropped a bunch.
The Clipper fan understands the Book of Exodus better than anyone... what it's like to struggle 40 years in the wilderness... and Genesis.. why Cain went after Abel... So fLakers, look out... we're coming.
Top