Most importantly, Boogie is here to provide 6 extra fouls against Jokic while also providing another big body that Jokic has to bang against and defend against. Once Serge gets back, we will have a constant rotation of fresh big men to keep throwing at the opponents. We had a major size disadvantage last post season which should not be the case this year.
Top

Actually, Boogie played pretty well in his last month in Houston. Like â¦ 12-8-2 in only 24 mpg. Yes, he only shot 43% from the fieldâbut he was hitting from deep and moving better. Hell, he was awesome in his last four games before they let him go. That last game â¦ they played the Sixers, who have a pretty good C. I caught some of that game, and Boogie played Embiid about as well as anyone can. Joel had 31 and 11 on 10-21 shootingâ¦but Boogie had 19 and 8 on only 12 shots. I meanâI dunno. He obviously wasnât going to be part of the Rockets future. But he sure seemed to be rounding into shape, and he looked good in this game against a super elite big. The Rockets came back in the fourth and almost took it. Boogie played 36 minutes and was (understandably) gassed at the end. Anyway, I think he can help.

As for Lou Willâloved him, sad he had to go. But he had to go. The good thing about Rondo, as I said in another post, is he fits with every other guard. You couldnât play Lou and Luke, and Lou and Reggie was sort of trainwreck-ish. But Rondo and Luke and/or Rondo and Reggie are much more capable; Rondoâs good passing but lower usage gives those guys a chance to play to their strengths. Weâre a better, more flexible team now IMO.

playaloc916 wrote:I was pleasantly surprised by Cousins. He has such a huge presence in the paint, and he was just gobbling up those boards. Was able to finish inside, and hit a deep 2 as well. I just worry about him staying healthy... With his injury history, every time he runs down the court I was holding my breath... But I agree, if he stays healthy, he gives the team a different look inside, and would be perfect matching up with bigger guys.

To go from having 8 guys in the Orlando game, to not having enough minutes for everyone (still missing Ibaka!), feels good man....

I'm not a Kennard fan lol

....but you didnât deny the rest

You really read those posts and came to the conclusion I'm a big Zu fan?

No, but I was just messing with you because you only denied his claim about Kennard
Top

....but you didnât deny the rest

You really read those posts and came to the conclusion I'm a big Zu fan?

No, but I was just messing with you because you only denied his claim about Kennard

So much last night to like about that game. Cousins came out looking great, for a guy who hasn't played in some weeks. I agree, he is exactly what we need. A veteran, strong, who won't be pushed around in the low post - and his second basket was a jumper.

Maybe it's too subtle, but not yet seeing Rondo in the same way.
The Clipper fan understands the Book of Exodus better than anyone... what it's like to struggle 40 years in the wilderness... and Genesis.. why Cain went after Abel... So fLakers, look out... we're coming.
Top

âHeâs an All-Star,â Paul George said to ESPN. âHeâs still one of the most skilled bigs in the league. He can finish, he rebounds. I thought you saw a little bit of everything from him tonight, and he showed heâs still got a lot left to give.â


âIâve put an incredible amount of work to get to this place,â Cousins said. âI feel great, my body feels great. Iâm in probably the best shape Iâve been in my entire career. At this point, itâs about going out there and just putting everything together and just trying to continue to show that Iâm healthy and Iâm here to play this game at a high level.â

In eight minutes, Cousins went 3-4 from the field for 7 points, while also adding 4 rebounds and 2 assists. 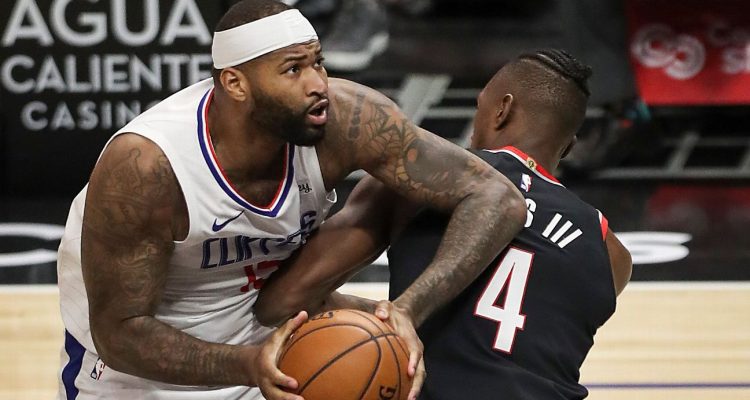 Are We Having Fun Yet?
Top
Post Reply
107 posts