LOL SOUL, were you the one to have Lord Diener's avy before? You have a new god right now?

Damn was gonna use that same avy! You beat me to it haha!
Top

Damn was gonna use that same avy! You beat me to it haha!

Now that Chuma has arrived, can we finally stop all the ham hawing over passing on NAW?

I agree with the view we shouldn't worry about whether Chuma plays PF or SF, the reality is him and Isaac at forward will present a nightmare and will be capable of handling both spots, depending on what the best match up is.

I was particularly impressed yesterday he started ICE cold, first 3 missed iron to the left and I thought uh-oh, back to Earth we come. But no, wasn't phased and finished with a very strong game. That to me was an important sign of what's hopefully to come.
I still believe in Magic!
Okeke / Isaac / WCJ front court for the future.
Ping pong ball god's, please give us Cade!
Top

Bensational wrote:It's funny how different players emerge and perform when you remove some of the other offensive crutches which block the way. Chuma doesn't get consistent touches like this as long as there were 3 other hungry mouths to feed ahead of him, plus Bacon and MCW.

Finally players are being challenged to think for themselves instead of just relying on the same tired 3-4 plays designed for 3-4 guys.

This. Chuma wasn't getting the ball when he was on the court. He's gone from a non-option on offense to the first option on offense, and, so far, he's been extremely efficient. And defending well.

Another stat I like from Chuma is that he's only averaging 1 foul/game, and that's remained relatively consistent through the last four games where he's averaging more minutes/game. He's just playing smart.

I juxtapose this against AG's start in Orlando (and really his whole career) where he just tried to force way too much. It's a breath of fresh air.
Top

im worried though that NOP is threatening to sit Zion due to reasons. I wann see hin go against him like in college. Although Zion has probbaly an extra 50 to throw agaibst Chuma
Top

And can he be a point guard in the mold of Ben Simmons rather than a point forward like Zion or Turkoglu.
cigamodnalro: "Orange Ave...One of my favorite guys here."

zuppafly: "Orange Ave was not a bandwagoner. He is a long time magic fan."
Top

Orange Ave. wrote:And can he be a point guard in the mold of Ben Simmons rather than a point forward like Zion or Turkoglu.

I've been pleasantly surprised by his handle and court vision so far, but I'm not there yet. I'm much more concerned with finding him a playmaking guard to play next to in the upcoming draft than I am about developing him into a lead playmaking role for this team.

I do think he can be a 2nd/3rd type playmaker for this team, as he has been, but I don't think he will ever be on a Turk or Simmons level.

And can he be a point guard in the mold of Ben Simmons rather than a point forward like Zion or Turkoglu.

I was also asking that. In some instances I saw OPJ clearly taller and bigger than him. OPJ was listed at 6'9 during his rookie year right?
Then again during the same instance, OPJ also looked similar or a little taller than Birch lol

So I really don't know.
Top

Funny how 1 week can change everything.

Okeke is a damn future Allstar.
Yet even amid the suffering that results from sin...god's love is revealed.
Top

This is why I wanted to do a full rebuild and trade our starters away. Give the young guys a chance to be 1st/2nd option and our opinion will change quickly. Chuma looks good. Efficient and averaging nice stats. Canât wait to see Cole come back.
Top

Funny how 1 week can change everything.

Okeke is a damn future Allstar.

How about this... Did this one age well?

Many of us just drooled over ATL landing DeAndre Hunter and Cam Reddish, but Chuma Okeke is cut from the same mold and played on their level or better at times this season. If not for his tournament injury, his stock would've been in the lottery no doubt in my mind. His injury was a blessing for us. Hunter propelled his stock in the tournament and Okeke was well on his way in doing the same thing. This will be a good rivalry for years to come.

Don't get mislead by the PF label tagged on his Auburn profile. He is not a traditional one dimensional PF by any means. He's versatile both on offense and defense. Bruce Pearl said

Weltman confirmed this repeatedly in his post draft presser.

"It's a little surprising he went this high, but that shows you where the NBA is headed. He can shoot it, he can guard, he can run and he can play all over the floor. You can move him anywhere."

I remember reading an article a while back, but I just had to find it again because I think it fits exactly into the theory that the Magic were thinking when they selected Okeke. The college game is copying the NBA in terms of 3 point shooting... and teams are having to adjust. Good read if you have time: https://www.ncaa.com/news/basketball-men/article/2018-10-24/6-things-know-about-switch-defensive-tactic-thats-taking

We are living the age of the 3-pointer in college basketball. Teams are shooting more 3s than ever before, and the trend doesnât look to be slowing down any time soon.

But what can defenses do to combat it? Switching on defense is one tactic thatâs becoming more and more popular.

Itâs difficult for two main reasons. First, it takes a certain kind of player to be able to guard multiple positions. Undersized point guards may be great on offense, but they probably canât hold up in this defensive system. Or you may have a plodding post-up beast whoâs immobile on the perimeter. That guy canât play in this defensive system, either.

Second, it takes a high level of concentration. Players werenât taught the art of switching growing up. While it can look easy, itâs usually a foreign concept, and the even slightest hesitation can cost your team.

This is why wings are such a hot commodity right now. Get a guy who stands between 6-6 and 6-9, is athletic and has sound defensive technique, and heâs the perfect switchable defender. That player should be able to hang with guards, like-sized players and even some centers.

I know a lot of us would've loved to land Hunter or Reddish in the Top 10, but a healthy Okeke is right there with them... comparing favorably to Kawhi Leonard, I might add

I know... I know... we're all disappointed that we have to wait for his ACL injury to heal... but that said, the Magic just got a player who possesses and NBA ready body from Day 1. Sure, he'll have to tone himself up as I'm sure he will naturally do under an NBA weight room regimen, but this is not a scenario like Jonathan Isaac or Mo Bamba who will need years to fill out their bodies to handle the rigors of the NBA. The wait for his body to be ready to play will not take nearly as much patience. In fact, one of his strengths is finishing through contact. Gotta love that!


Steal of the Draft

You heard it all over ESPN when Okeke was drafted. Mike Schmitz was raving over our pick.

Chuma Okeke has a chance to be the steal of the draft here. If he didn't go down with that ACL injury, I think we're talking about him as a surefire lottery pick," ESPN analyst Mike Schmitz said. "Seven-foot wingspan. Defends multiple positions. Can space the floor offensively. Has a strong feel for the game. He was really the glue that held that Auburn team together. He's unselfish, he moves the ball, he knows his role. In today's NBA, he's the guy you want. He's the prototype.

This is a huge win for the Orlando Magic, even if he has to sit out.

Now those are all fun words to hear, but none of us thought he was going to be our pick at 16. I definitely was a fan but saw his draft value in the late 1st/early 2nd round. I was hoping for the Magic to do something dramatic like move up into the Top 10, but I have to say.. It's a crazy time to be a Magic fan... whether you like or don't like the pick... that's for sure!

Mike Schmitz continued to rave on about Okeke being an "Analytics Darling"...

"He is an analytics darling in a lot of ways. ESPN.com's the genius of the numbers, Kevin Pelton had him ranked No. 2. So this is a guy that analytics models really liked and basketball people clearly liked in terms of versatility, in terms of his ability to shoot the ball, and his feel for the game."

Schmitz was off by 1. Chuma Okeke actually ranked 3rd on Kevin Pelton's stats only projection. 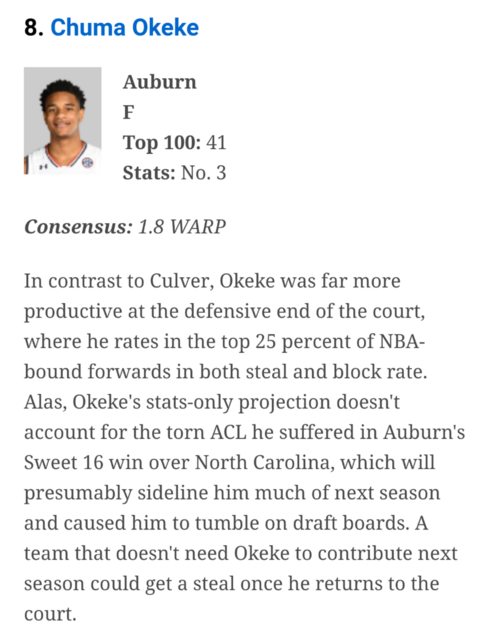 Okeke has played more aggressively during the tourney than he did during Auburnâs up-and-down season. Heâs an advanced stats darling, supercharged by a 5.6 percent block rate, 3.6 percent steal rate and 59.0 true shooting percentage.

I don't know if this is common news but back in February, the Orlando Magic made headlines...

As data becomes the new currency in professional and collegiate sports, teams are leaving no stone unturned to access the best available information in order to field the best team to win. This arms race took another distinct turn on Monday when the Orlando Magic announced an exclusive deal with STATS whereby they will have access to AutoSTATS, the company's offering of new artificial technology (AI).

The Magic will use the tracking data produced by AutoSTATS in a number of ways, with the ultimate goal being to help the front office make more informed player evaluation decisions for upcoming roster moves. They will use the software to analyze players from the collegiate level in determining which players would make the most sense for the team in future NBA Drafts.

AutoSTATS delivers comprehensive player-tracking data directly from game video and assists, through their own proprietary and patented AI and computer vision technology, in making player evaluation determinations. This new technology will give the Magic exclusive access to collegiate tracking data from the company that is largely unavailable at this level of use, due to the scarcity of in-venue tracking systems at the NCAA basketball level.

Clearly the Magic used their advantage in crunching numbers to come away with the player we picked at 16. If you're not on board yet, you will be. Chuma was the heart of the Auburn team that made a deep run in the tournament and will shortly make it into your hearts as well.

LMAO this thread is going to be classic, can we just sticky it for the entire time Chuma is a magic, and make Pepe's annoying quick reactions look silly. No stats to pull out, guess he's going to pray for a slump. lol
Top