Not that we need more evidence of Embiid's greatness, but I've been commonly seeing people question Embiid's game translating to the playoffs, and I've seen a lot of people mentioning that Embiid has failed in the playoffs in the past. I've gotten into a few debates on the General Board about it the last few days, and I've pointed out that Embiid's on-court career playoff net rating of +7.0 is among the highest of any #1 option in the league (only behind Kawhi and Curry), and he's also gotten among the least help when he's off the court - the Sixers are -7.2 when he's on the bench. The only star with less help has been Jokic, and his on-court ratings are far worse.

I also just realized that you can use 538's RAPTOR to compile a list of the top playoff performers across multiple years. Embiid's 2018-19 performance is the #1 rated playoff performance by their metric since he started making the playoffs in 2017-18. His 2017-18 performance was great at #32 as well. His 2019-20 was pretty garbage though.

Keep in mind that this data is from before he took a huge step forward this year. Two other Sixers performances show up in the top 10, including one surprising one. 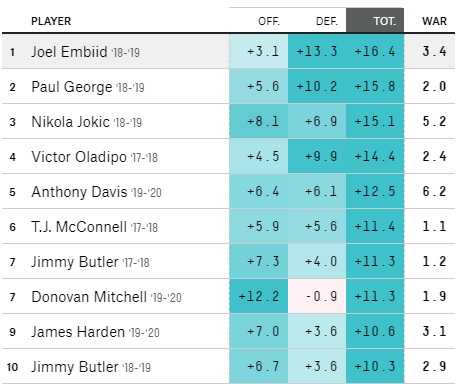 I do find it weird that the current MVP narrative is all about games played yet the significant defensive gap between Embiid & Jokic gets waved away with little discussion. Denver probably finishes 4/5 in the West and they're only that high because of a good month long run where they didn't play a super strong schedule.

Jokic is deserving of the award but I wish people would just make the argument they think he's been better this season. It's just kinda weak and not a very interesting convo to say "Embiid has been dominant but he missed slightly too many games."
Top

the missed games are simply the tie breaker
#NeverGonnaBeGood
Top

No one in NBA history has won an MVP missing 25% of a season.

Also the records arenât that far apart. Embiidâs my favourite player but the MVP conservation was done once he starting missing a chunk of games. Most Valuable, Embiid is not (its a RS award anyway).

Also Iâm still not buying Embiid centric offense as the primary hub, needs to a be balance, we donât have the caliber of players for that but once again the payoff is extremely great.

Itâs so logical to cash the chips in. A rock is better then two sticks in the other, it will be an indictment on the whole organization if the super simple building process never actually got past stage 1.
Itâs like you got the hardest part out of the way (Superstar top ten player), then struggled mightily to form any semblance of a true championship contender, itâs super counter intuitive.
Top

Yep, the Process was all about getting that top 10 player to build around and some additional assets to help get a good supporting cast. We got it in Embiid, he's the Process.

We have failed in getting the most easy part done. We're still in time to do it, but we have to hurry.
Top

Does he have any memorable wins when Ben doesn't play? Any iconic singlehanded legendary performances?

I'm sure there are some out there, but they aren't springing to mind.
Top

Embiid went off for 49 without Simmons vs Hawks last season.

He went off for 50 vs Bulls this season (again without Simmons).
Top

The Miami game this year with the gleague squad.

I'm sure there's something from his rookie season, perhaps during that January run. He was on a minutes restriction that year so he didn't have any monster point games and we were also pretty bad, so a lot of his big performances would have been in losses.

Maybe that Hornets game where he wrecked Zeller, the big upset vs Toronto in January, or the Rockets game, the last game he played where we lost but he crushed it on a torn meniscus.
jonjames is a signature bet welcher.
Top

The Miami game this year with the gleague squad.

Sent from my SM-G998B using Tapatalk

This was elite
Top

He hasnt been rebounding the ball that well lately. Idk if its strategy but he looks to box out and let other teammates to get the ball but sometimes the other team gets the offensive rebound.
Top

As farfetched as it may sound but I do feel like that Embiid does not give full effort on defensive plays where there is a higher potential risk of getting injured, i.e. spraining ankle etc. We remember that Joel played quite reckless in his first year, going for more blocks etc. Case in point, we also see that he never lines up for an offensive rebound during free throws in order to slow down the game and conserve energy. Overall I do agree with this approach (if it is indeed laid out this way). During the playoffs I believe he will be much more pro active.
Top

Embiid probably at 90%. When he got bad you can see him try to drive the lane. He hurt his knee on one of the drives. Grimaced.

kuclas wrote:Embiid probably at 90%. When he got bad you can see him try to drive the lane. He hurt his knee on one of the drives. Grimaced.

This put a smile on my face. Thank you.
Please allow me to introduce myself I'm a man of wealth and taste.

This put a smile on my face. Thank you.

You are more than welcome my brother.
Top

God, he's so good. It's a little depressing that he doesn't already have a ring.

I love Ben, but imagine if we had a Kobe Bryant or James Harden to pair with Embiid. We would be obliterating everyone (health permitting). Embiid's offensive game is at another level now and he is truly unstoppable.
Top
Post Reply
852 posts