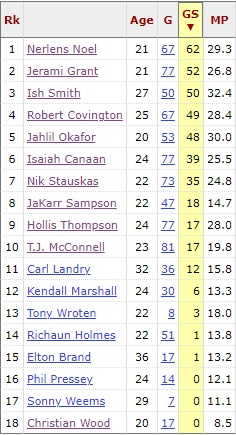 Everyone here knows that this roster was one of the least successful teams in NBA history. However, five years later, a lot of these guys ended up having decent careers. Christian Wood and Jerami Grant have been rising stars this year. Covington has been a great player for years. Richaun, TJ, Nerlens, and Ish are solid rotation players. Even Jakarr and Okafor are still in the league.

I know a few of those guys would take a bit to develop into what they are now but that team really should have been a normal 15-20 win bad team rather than an all-time terrible team, and if a few reasonable changes were made, we might have been able to avoid the Colangelos. I'm not even going to address draft decisions, because while I think the fallout of the Okafor pick had the biggest impact on our team's (lack of) success that year, I'd rather focus on decisions made post-draft rather than the draft itself.

I think the #1 problem for that team is that the rotation wasn't operating as a meritocracy. A few years ago, Morey and Hinkie were discussing during a SSAC panel about how it took the Rockets like one or two practices to realize that Chandler Parsons (a 2nd rounder) was better than the forward the Rockets drafted in the 1st round (Marcus Morris). The Rockets ended up starting Parsons most of the season.

Would Morey have done the same with Okafor and Richaun Holmes? I think it should have been pretty clear from their archetypes that Noel, Holmes, and Okafor were all pure centers in future successful lineups, and that none would be able to co-exist, meaning one of them should have been out of the rotation. Some will disagree here, but it should have been clear early on that Okafor was the 3rd best player of the three. He also had the least useful projectable archetype of the 3 when trying to construct a winning playoff basketball roster. We ended up wasting so much time and accumulated so many losses by forcing Okafor into the rotation with predictably unsuccessful twin tower lineups.

The point guard situation was criticized a lot that year. Hinkie brought in 5 point guards that were all 24 and under to training camp but all of them were 2nd round/UDFA quality prospects - Isaiah Canaan, Kendall Marshall, TJ McConnell, Pierre Jackson, and Scottie Wilbekin (I believe Tony Wroten was around too but recovering from a severe injury). None materialized into a starting quality point guard and eventually Jerry Colangelo came in and tried to solve the problem by trading two seconds for a little over half a season of Ish Smith.

You have to wonder how things would have looked with some better constructed lineups and also just signing Ish to return on a cheap one year deal that summer after his success with our guys near the end of the previous season. A rotation of Ish/Stauskas/Hollis/Covington/Noel with TJ/Canaan/Grant/Holmes getting most of the bench minutes would surely have functioned a lot better than the poor units we were running most of the year. The starting lineup has a lot more spacing and you have a decent mix of skillsets on the bench (though we definitely lacked shooting). It sucks to deal with the optics of a #3 overall pick not getting many minutes, but a strong GM should be able to identify the better players quickly and play them.

That roster had enough talent on it that it should have won more than 10 games. You have to wonder if some of the potential of these guys would have been unlocked sooner had we put them in a better position to succeed that year. Instead it seems like we sacrificed the development of many eventually good players just to force the development of a worse fitting inferior player due to a higher draft pedigree.

Thereâs just no leadership on that roster, up-and-down, to hold people accountable. Even if some of the minutes were allocated differently, this was going to be a bad team. It was basically a summer league atmosphere for 82 games, where everyone was auditioning and trying to improve, but no one really knew what it took to win games.
Top

I like both guys both these guys just exceeded their projection given the information available when we had them.

Spoiler:
Christian wood had personal problems. I believe it was discussed during a windhorst podcast.

Jerami Grant was just so raw when we had him. His biggest improvement was on his shooting. He was shooting 24-31% from 3 and 60-65% FT%. Itâs likely then even Presti and the Nuggets didnt also expect him to be this good averaging almost twice as many points per game as Ben Simmons and shooting 36% and 86% from 3.

Now going to the meritocracy issue. The problem is in the NBA when you are drafted as a top 3 pick, the team would invest heavily on you. I believe they did a study about this for ive read it somewhere. Thereâs no way youâll be on the bench over a second round player. This is why guys like MKG and Wiggins were hold on very long despite the clear fact that they were busts. Wiggins was even paid like a superstar when his contract run out.

Abstract
This study represents one of the first quantitative field tests of the sunk-cost effect. We tested whether the amount teams spent for players in the National Basketball Association (NBA) influenced how much playing time players got and how long they stayed with NBA franchises. Sunk costs were operationalized by the order in which players were selected in the college draft. Draft order was then used to predict playing time, being traded, and survival in the NBA. Although one might logically expect that teams play and keep their most productive players, we found significant sunk-cost effects on each of these important personnel decisions. Results showed that teams granted more playing time to their most highly drafted players and retained them longer, even after controlling for players' on-court performance, injuries, trade status, and position played.

Thereâs just no way you will bench a top 3 pick over a second round player. The mistake maybe is not drafting Christian Woods with the top 3 pick.
âBefore you argue with someone, ask yourself, is that person even mature enough to grasp the concept of different perspectives? Because if not, there is absolutely no point.â
Top
Post Reply
3 posts • Page 1 of 1