wheezy wrote:Something about those just bugs me... the fonts don't look like they match and don't really go with the pixelization, plus just saying "the valley" makes me think of LA not "the valley of the sun".

What if it said "of the Sun" the same size as "The" below "Valley" and the # and everything was in the same font?

So was this some tie in branding with the ValleyBoyz then?
Top

MrMiyagi wrote:I like the idea, but I don't really love the pixelated look.

Yeah, I'd much rather have the Suns 90s' retro
Jersey look with the Orange trim and the Sunburst on the front.

Or IF they have to absolutely do a pixelated look, Then maybe something along the lines of the 2009 Phoenix suns all star game desert logo
https://en.m.wikipedia.org/wiki/2009_NBA_All-Star_Game

( But with the sunset/mountain scene in the background)But maybe put the city scene in, and The valley boys insignia across the top perhaps.

or even the orange statement jerseys but with more of a purple trail behind the sunburst, And maybe dark purple/ crimson trim down the sides?

Its pretty much what i mentioned in the past, doing a mountain with a Utah style color gradient. I do believe i had more colors in it, and didnt have "The Valley" predicted, but still its a great choice. Glad to see them actually do something new and away from the norm.

Im still a fan of these concepts though:
Spoiler: 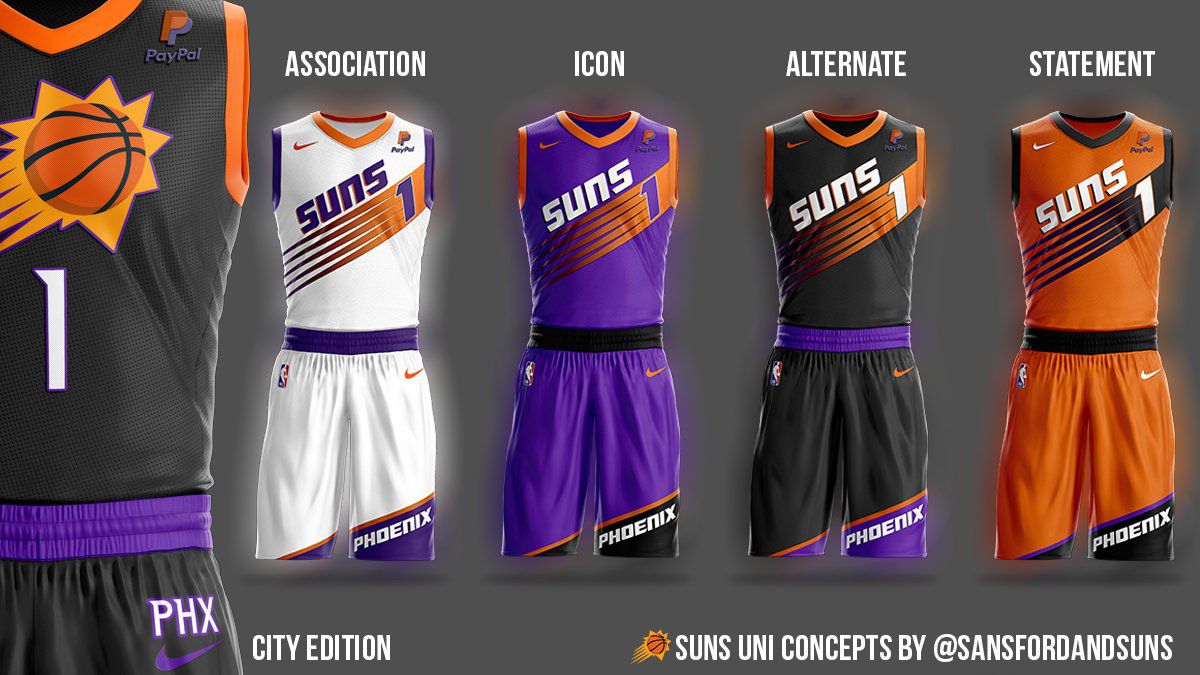 Its #DUMPSTERFIRE SEASON! #TeamTRAINWRECK -KERRSED- The Mod, The Myth, The Legend

These are my favorite unis. But I'll admit that I do like Kerrsed idea mentioned above too!

These are my favorites 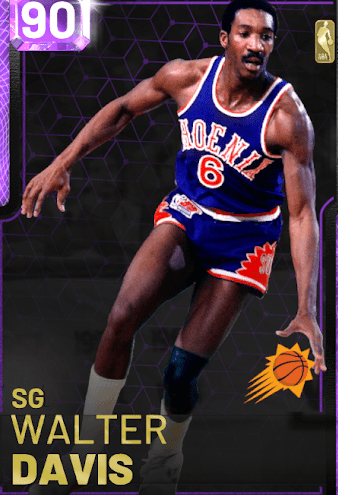 My feeling exactly. At least they are using a good mix of the right colours unlike that straight orange one 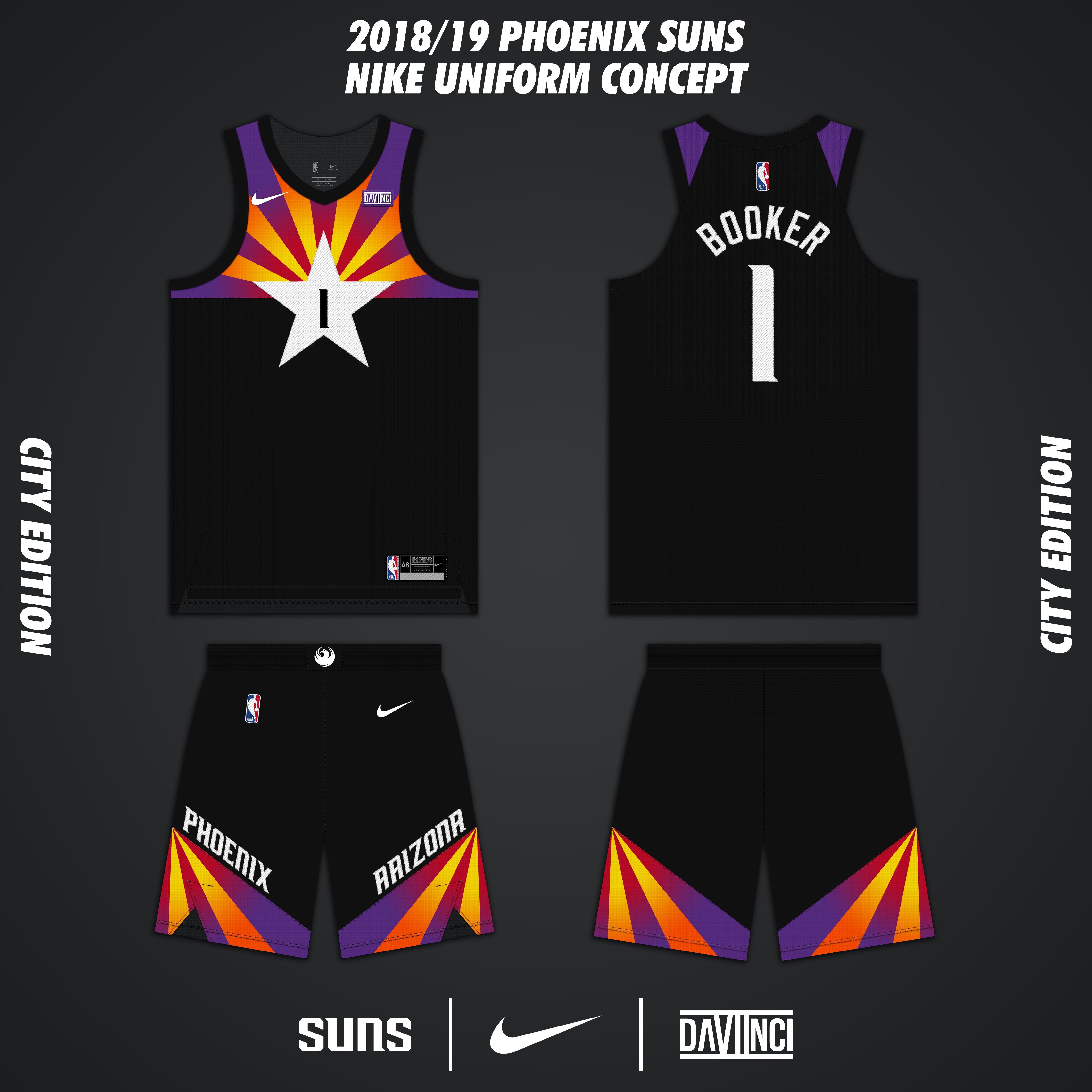 Probably my favorite concept Suns jersey ive ever seen. I was originally looking up AZ flag pictures because i was going to mock up something very very similar, but i came across these and thats EXACTLY what i was going to do. He knocked it out of the park, and the colors are phenomenal.

Also, i think it would be really cool to spice up the yearly Los Suns jerseys. Just a plain single color with Los Suns is boring as hell. They really need to incorporate some kind of Sugar Skull design into it to spice it up. Even if its as simple as a white panel down the sides from the armpits down that have a sugar skull design. Came across a couple Suns related Sugar Skull designs that would be cool. Ones straight Suns related and the other one is like a Suns Gorilla Sugar Skull. 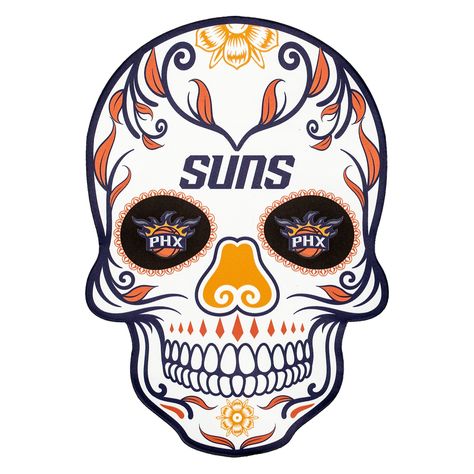 Or even doing the Los Suns in a different style font instead of just the regular ass font. I mean maybe something like this (Excuse the sloppiness, just spent like 20 minutes throwing it together): 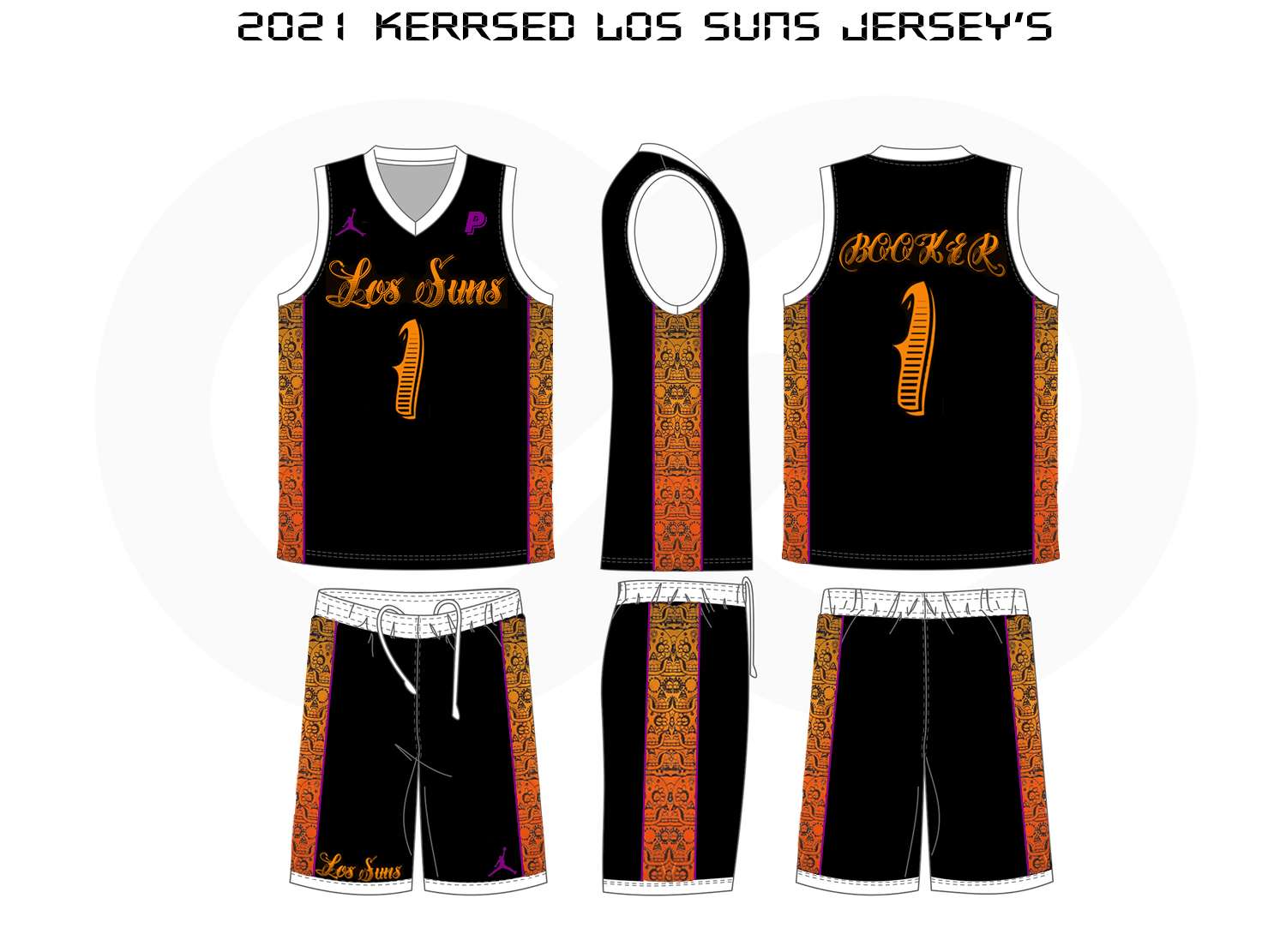 So yeah, something along those lines. Maybe not do the side panel straight down, but curve around the skull pattern and maybe with the shorts something similar, but spread out to more skulls at the bottom. IDK, just something different than a solid color jersey thats only difference is saying "Los Suns" instead of just "Suns".
Its #DUMPSTERFIRE SEASON! #TeamTRAINWRECK -KERRSED- The Mod, The Myth, The Legend

I like it. This will be the first Suns jersey Iâve bought in quite a while.
Top

I think these look awesome! Why is the leak coming from Brazil though?
Top

Wow these are beautiful!!!!!!!!!!!!! The pixelated look might turn some off but THAT COLOR GRADIENT THO
Top

Its pretty much what i mentioned in the past, doing a mountain with a Utah style color gradient. I do believe i had more colors in it, and didnt have "The Valley" predicted, but still its a great choice. Glad to see them actually do something new and away from the norm.

Im still a fan of these concepts though:
Spoiler:

The Icon and Alternate ones are fantastic.
Violence is the last refuge of the incompetent. - Isaac Asimov
Top

I think these look awesome! Why is the leak coming from Brazil though?

Nike has 24 factories in Brazil, with 9 for apparel. Looks like thatâs probably where they are making samples before sending to wherever theyâll be mass produced. Quick scan of the Nike website shows they mass produce fan jerseys all over from Thailand to Netherlands, Guatemala, Honduras...
Top

Phoenix Suns (@Suns) Tweeted:
You may have seen itâ¦ but you havenât seen it all.

I like it, looks very iconic! Might have to pick one up.
I Dont wanna be here
Top

In the stills you can see the whole printed part is on a shinier black than the duller black above and below, with horizontal seams that run through the numbers on the front and just below the Nike/PayPal logos. That detail seems super awkward and will probably bug me watching games.
Top