SEGABABA time! We can only focus on the task at hand using what we've learned the last couple of games. Hard lessons, but rewarding when we make them pay off for us. To do that, we must start strong, stay focused on fundamentals, and remain resilient. This is the time to come together and push through a victory.

Earn The Stripes Mode: Each Spur all in together. 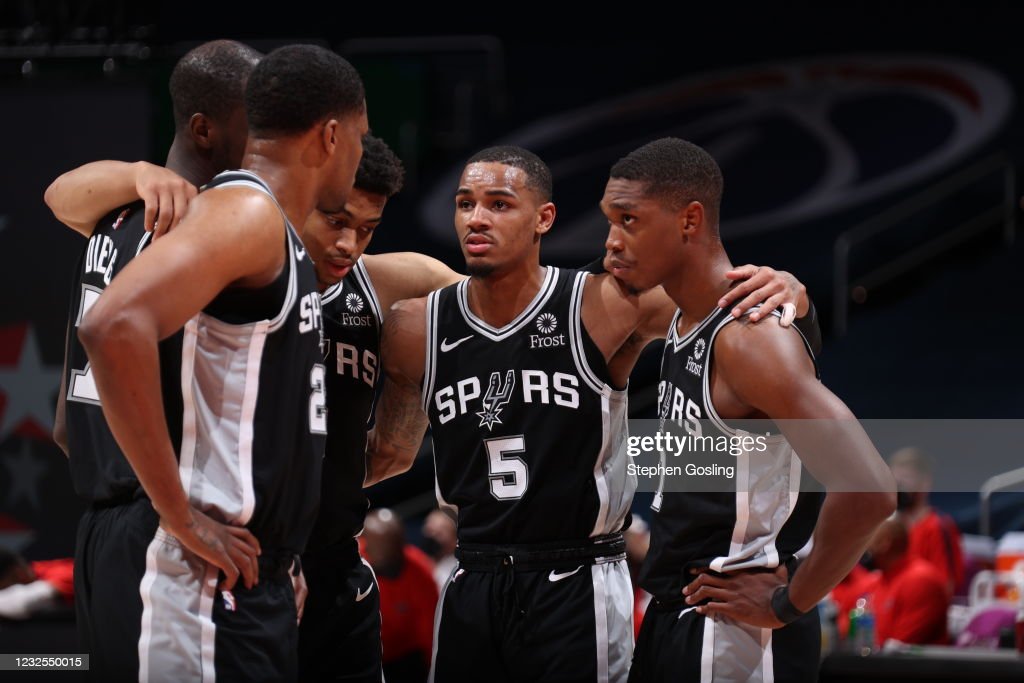 Edit: This was a Fiesta game.

They are carving into us inside. We're tentative because of their Rudy, but it shouldn't stop us from moving the ball faster to move them out of position, some back door cuts and hard finishes at the rim.

Well DJ is picking up the pace and setting the tone for us so that's a positive.

Keldon is only 0-1 and Patty has not taken any shots - we need to get both involved more.

We also need to rebound better in our end - BOX OUT!!!

Feels like yesterday's last second loss took more out of us than a SEGABABA accounts for. Of course, it didn't help we were in another OT as well. Our body language ranges from frustrated to, like, shell shocked. Their 20-8 run to finish the 2ND Q after we were actually ahead in it for a bit has us on our heels trying to hold it together and figure it out on the fly.

DeMar, DJ, and Jakob are efficient, and Rudy is 3-5 from the bench but the bench has only contributed 12 points in total.

We are making unforced errors but also their D is pressuring us into TO's - combine that with weak, predictable passes and our 8 turnovers account for their 13 points.

We have three tall bigs, but we look small because of the lack of verve at the rim. We're getting outrebounded 26-17, including a whopping 7-2 on O boards.

Lots to work on.

One of those games where Pop is the most fired up man on the court, getting after refs, trying to make adjustments in the game, calling timeouts to ignite our spark and get our inner fire going. Right now there's a lot of letting things happen rather than just turning up our hustle and aggressiveness. We need to turn it up right now.

WOW Keldon got absolutely clobbered on a screen that they got their last 3 on. Pop was in the ref's ear on the sideline about it. Could've been the difference between a 15-point or 12-point deficit and some momentum. Critical. It's not why we're down, but every play counts and we're trying to make a push.

HUGE couple of possessions there - we gave up two O boards and eventually they get 2, we get 2 O boards and miss all 3 chances, then they score again.

I don't play basketball video games (or any for that matter) but sometimes I forget players are human. The dreaded third game in four nights, this after an OT in which we fought valiantly but lost it in the last second all accumulated and resulted in another muddled, uncertain beginning.

A pattern when we're struggling, be if from fatigue or a losing streak - or in this case, both, is starting out tentative, getting down early through sloppy D and poorly orchestrated O, exchanging runs before giving up a big one. Then showing some fight in the second half to make it respectable, almost as if we were conserving energy to make a push later, but the early tentativeness required extra effort. Self-defeating cycle.

When we're playing well, we find ways to win - we're more aggressive on both ends, we don't pull punches on drives or contests, we pass and rotate crisply and execute the game plan.

And so after a good stretch we're mired in a poor one with no one to rescue us but us. Part of what Pop said above has to do with a mindset. Again, even with the caveat that we're tired, we start lacking confidence and play like we're new to one another. Ok, new starting lineup with Derrick out, but still we run what we run.

I thought Keldon was iced early and we didn't get him going enough. Not that it's intentional by his team mates, but at this time of year and with us trying to make a push for the play-in at least, the hierarchy seems to be all the more prominent: DeMar and DJ assert taking their shots, we feed Jakob inside more, and Keldon and Devin eat last.

Lonnie was terrific last night and only got FIVE shots up in this game, making 1-5. It's tough for him out there with DeMar and Rudy as, again, the scoring hierarchy reared its head. Ok, Rudy's role is scoring, but he was third on the team in attempts. It sounds strange to criticize given that he was second in scoring behind DeMar's 22 and his 17 points were on 7-13, 3-6 from 3. And the flip side is Lonnie has to work on his consistency, too. So we went with the hot hands, fine. And Rudy also led us with 7 rebounds, and had 2 steals and 2 blocks. His help D was good tonight as well. We did a better job as the game progressed on angling drivers to the outside and help D stepping up to close up the lane to the basket on the baseline.

It's not criticism so much as longing for Lonnie to get consistent opportunities. A balance of giving it to the hot hands and keeping key young guys involved like Lonnie is optimal. If they don't have it on a given night it's one thing, but it can be a chicken-and-egg argument in terms of developing consistency: they need the reps. DeMar and Rudy got them in spades at certain points in their young careers, and here we are. (The flip side is the growing pains with Keldon going 3-10 and Lonnie struggling).

Devin has started a handful of games now and finally in the second half of this game he looked like he had his legs under him. He started slow again - long shots just swirling out time and again. He finished with 11 on 4-8, 1-2 from 3, 2-2FT's, and showed terrific hustle on rebounds as well as quick outlet passes. It's fun to watch him think and grow his way in the game, finding ways to contribute. Some things like the rebounds and quick outlet passes are ingrained, others like going under screens to fighting over them and anticipating passes and getting deflections are smarts and hustle. I can't wait until he is a problem for the league. The Boston game showed his inexperience, and how he needs to get faster and stronger, but he also shows flashes of asserting himself like his curl drives for dunks (or attempts that got him FT's). I liked how he brought another gear in the second half.

Dieng's audition is going better than expected. He has an edge to him and gets into it with opponents at times and I think it's some chest out grittiness that is a good infusion for us. Not as efficient as yesterday, but he still led our Cs in scoring with 9 points on 3-8, 0-2 from 3, 3-3FT's, with a solid all around game with 4 rebounds, 3 assists, and 2 steals, the latter three categories he either led or tied for the lead from the bench players. He willingly throws himself on the ground to hustle after loose balls, he has a nice touch, and makes smart plays. Effective player; glad it's for us now.

I'm starting to wonder if something's going on in Patty's life off the court that is affecting his play on it. There are cold slumps, and then there's the Day After Tomorrow deep freeze that is his April now into May. It's gotten so bad that he's gone from trying to shot himself out of a slump to just not shooting. He made some good defensive plays, anticipating passes and getting into lanes, and made quick passes ahead in transition. He helped however else he could despite his shot not being there. I just hope he finds his shooting stroke back.

DJ had his going making 7-13 for 15 points, 5 assists, and 6 boards but he was second to DeMar with -12. He kept getting blown by first steps - a surprising trend this season. He stays with the defender and tries the poke from behind, but it's still more DeMar than Derrick on those blow-by drives. He's a Swiss Army knife and I feel like he tries to do it all when we're struggling, at times making him spread a bit thin. He's fully capable of being that guy, but we need a balance that we do not have right now.

Our roster lacks 3 shooting - after the 0-7 start we actually made 5-11, but 18 attempts won't cut it versus the team that takes and makes the most 3s. Our starters combined for FOUR attempts from beyond the arc. It's too predictable to game plan against, especially when two starters just won't or don't take them. We lack a true PF, preferably a bouncy, aggressive one who can BOX OUT, grab rebounds on both ends, and spread the floor. We're also lacking the requisite attitude coming into games now. Earlier in the season we were pleasantly surprising in that we got the jump on teams and we were reliable in cutting deficits and finding ways to win.

Right now, two of those three things are within our control. The roster is a work in progress in terms of balance and right personnel for the jobs at hand, but nothing is stopping us from taking more 3s, from boxing out, from hustling hard from the start of the game, from being the aggressors on both ends. Pop - working the line-ups, working the refs - shouldn't be only one most fired up most consistently. We need to show more of all of these in the final stretch of games.