For obvious cross-over reasons and general NBA talent interest, here are the particulars about the roster and key dates in the schedule, starting with the mini-camp in Las Vegas. The team is helmed by Pop with Ime Udoka helping as one of the assistants, and of course DeMar, now with the Spurs family, attending, too.

Here's a link to the 35-player roster and coaching staff bios:
https://www.usab.com/mens/national-team/roster.aspx

Team USAâs basketball camp, led by new head coach Gregg Popovich, will begin in Las Vegas this week, and it will include the Spursâ newest acquisition: DeMar DeRozan. Although not the same as club basketball, it will be his first chance to be coached by Pop and give him a little taste of whatâs to come ahead of training camp (although this will likely be much lighter).

DeRozanâs prior experience at the national level include being part of the US team that won the 2014 FIBA World Cup. He also won a gold medal with Team USA at the 2016 Olympics....

Once again, welcome to San Antonio, DeMar! Enjoy your first experience with Pop!

For Gregg Popovich, a Second Job Comes at Just the Right Time

On Thursday in Las Vegas, Popovichâs tenure as the next coach of the United States menâs basketball team â and the successor to the wildly successful Mike Krzyzewski â begins in earnest. Thirty-five American stars have been invited to two days of light practices and bonding meetings to launch the transition from Duke Universityâs Coach K to San Antonioâs Pop.

âThis summer is more about camaraderie than coaching,â Popovich said.

Asked how he had been coping with events both at and away from work, Popovich offered a brief acknowledgment that âitâs been difficult.â

Popovichâs closest friends, then, are understandably hoping that stepping into the U.S. national team role â his dream job â can provide a sanctuary from everything else.

As fiercely patriotic as anyone in basketball, Popovich inevitably prefers to focus on the new gig....

âItâs an absolutely humbling endeavor and an honor to be asked to do this,â Popovich said. âItâs bigger than any one game or any one season.

âI feel that already. I think about it every day to some extent.â

JERRY COLANGELO: Sure. First of all, welcome, everyone. You know, it's another exciting time for USA Basketball as we get ready to prepare for this next series of competitions. We don't have competition this summer, obviously, with the new FIBA format, but we will be meeting this summer and taking our first step in continuing with our culture under the new leadership of Coach Popovich, getting ready for the World Cup in '19 and the Olympics in 2020.

Just a couple of things. The selection committee was comprised of Sean Ford, who is a longtime USA Basketball executive and a very key part of our whole program, myself, and Coach Popovich, and you can see that we have an extensive list of qualified, experienced, international experienced players with some new additions, and we're excited, obviously, about that.

So we're excited to get the ball rolling, and bear in mind that this is a fluid list, as it has been in the past, but very pleased, very excited to have Coach Popovich taking the lead as we go forward here, and I'll now turn it over to Pop.

GREGG POPOVICH: Thank you, Jerry. Hello, everybody. As anyone might imagine, this is quite an honor and humbling experience to be involved with USA Basketball and this group of players. I'm very much looking forward to getting together with everybody this summer....

The summer is going to be an interesting social experience more than O's and X's and that type of thing. But very necessary and very important, getting the group together to continue the camaraderie and the friendships that Jerry and Coach K and Sean Ford put together for the past years, so that will be hopefully a continuation of that.

GREGG POPOVICH: It's quite the idea or thought when you think about being on the court with all these players, that's quite a brotherhood. There's a lot of talent there. There's a lot of friendships. They enjoy getting together. The culture has been established already, you know, with USA Basketball and everything that they've done. To see that in action and to see all these guys come together in Vegas this summer is going to be pretty exciting.

For the rest of the transcript, please go to https://www.usab.com/news-events/news/2018/04/mnt-plyer-announcement-teleconference-transcript.aspx

Breaking bread together and feeling the kinship:
Read on Twitter

Pop outlining his vision for the program to USA National Team members: For the rest of the photos, see https://www.usab.com/basketball/media/galleries/2018/07/mnt-gallery-1.aspx 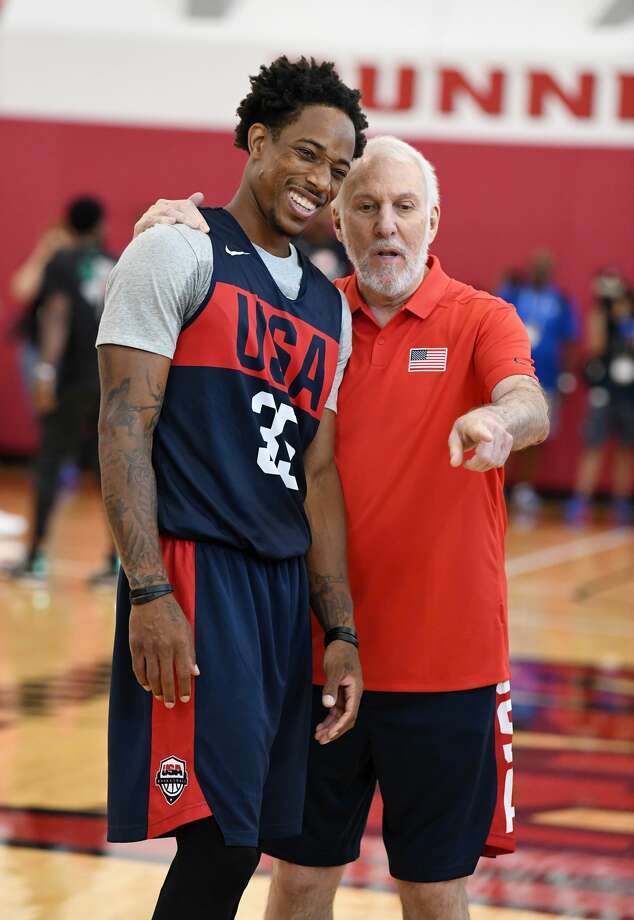 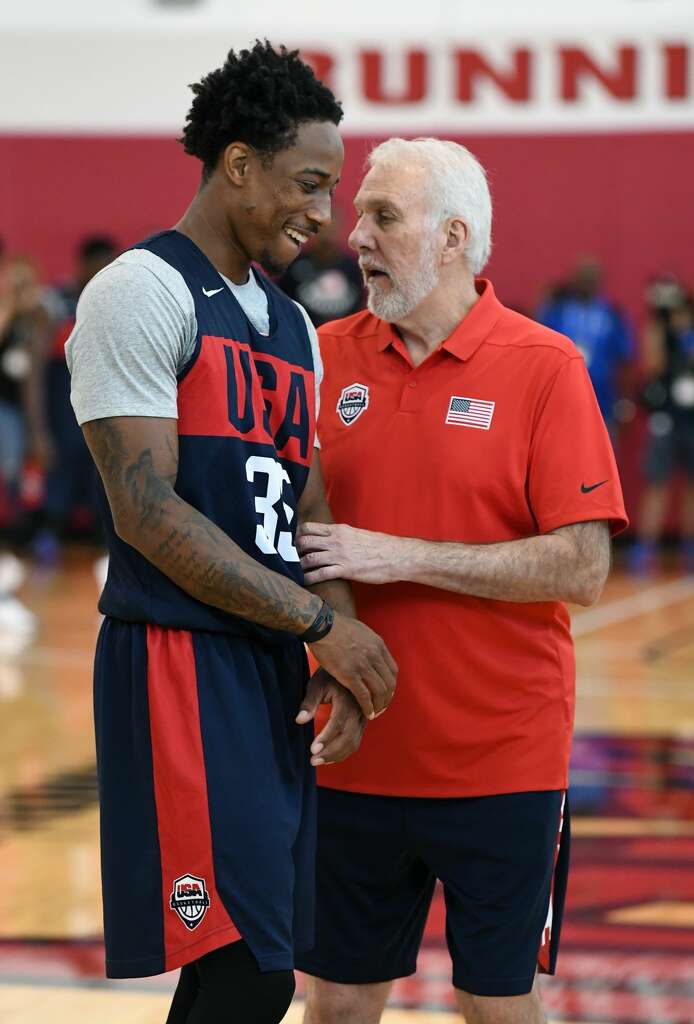 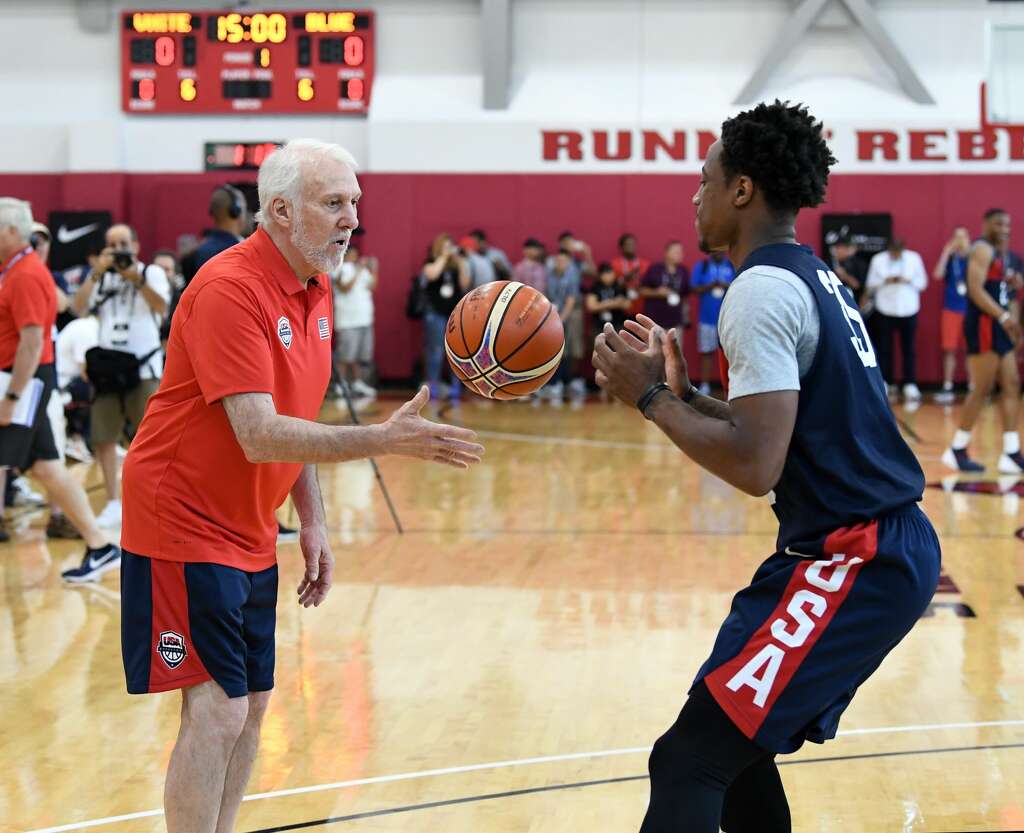 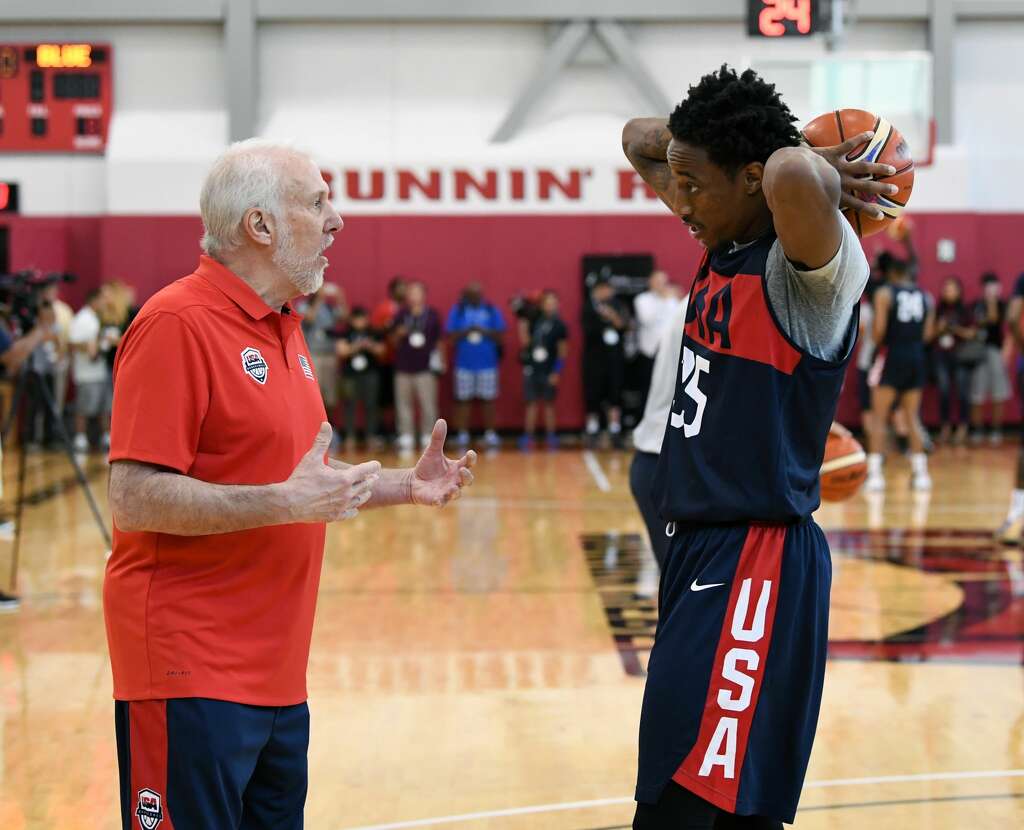 âToday was great,â he said. âMe having another opportunity to be in this position again, to represent my country again, itâs an honor.â

Thanks for posting these, great stuff.
Top

^Appreciate it, Donald, thanks!

The foundation of our Spursy defense
Read on Twitter

I got a chance to watch whatever they showed of the practice online today and it was really great to get some insight into how they're run. Among other set ups (sometimes the stream was weak), the players did some shooting and one on one drills, then were put into three teams of five, two teams on either end focusing on D while the third was on O, back and forth; then it looked like they alternated. (It's a good drill to get players to focus on their responsibility on one end at a time). In between, Pop chose a player at random to shoot FTs. When a FT was missed, the players did push ups! Tough, but put in great effort and really went at each other in the scrimmages.

DeMar was the third (I believe) player chosen to shoot FTs. It sounded as if he made the first and missed the second (the camera was too often zoomed in on either Pop or DeMar even during on court action - it was a bit weird, even for a SA station), so down they went. As DeMar was finishing his (military style, I was impressed, though he may have shaved an inch here and there on the range), Pop came by and 'helped' him out 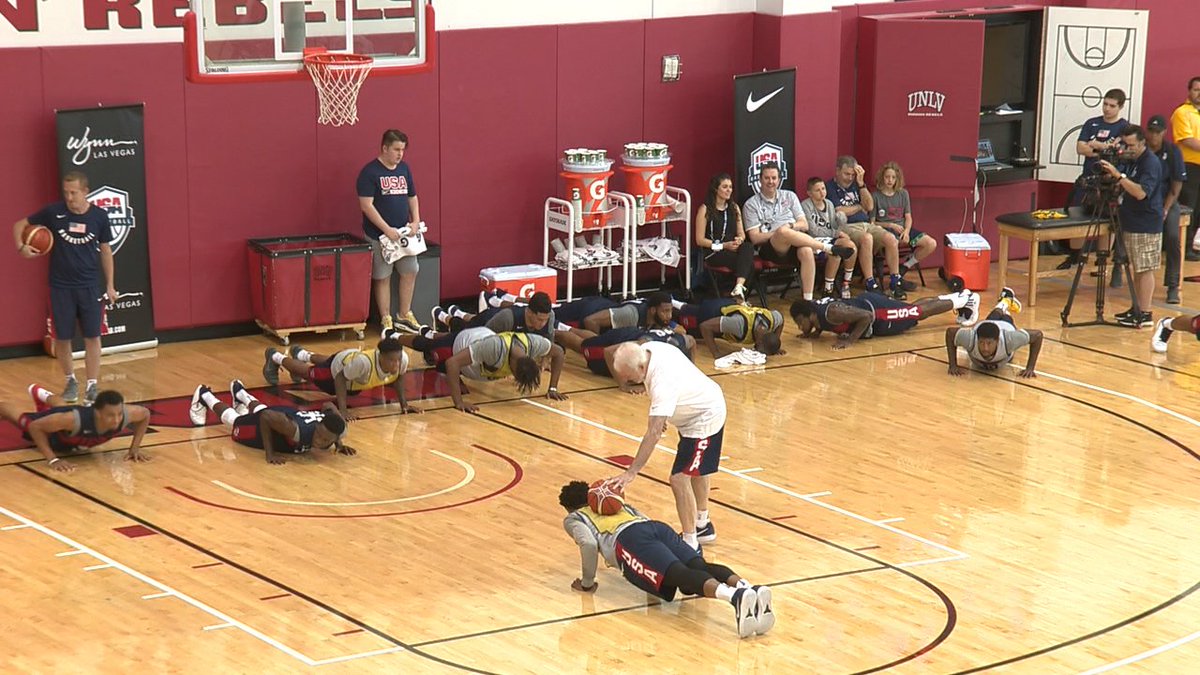 "Free throws are important, and any time you can put pressure on somebody in a practice situation, I think it helps," Pop said. "You go up there, you don't want to miss because it causes pain for everybody else. There's a little bit of pressure there and that's what you saw. It's good stuff, it's a nice little technique."

Not sure how DeMar fared on the O end (zoomed in camera). On the other end, there's not a world of takeaway about DeMar's D work (on the yellow team with Harden, among others), but I did notice something about his footwork that I can't quite place my finger on. Sometimes he crosses his feet, so that's not ideal, but though he got to the player with the ball quick enough, I don't know if it's that he's a bit flatfooted at times or his set up position doesn't allow him to respond as quickly or what. It's a minor thing, and I'm sure the coaches there and our staff will work with him on whatever they think needs sharpening. Still, on D he found his man fairly consistently and poked the ball from behind the defender (reminded me of the move Kyle became known for) on one play and deflected a pass to break up the O attempt on another. This isn't micro criticizing, just pointing out things that caught my eye.

Anyway, nice to hear they had a good talk after practice:
Read on Twitter

Melo dropped by and AD made an appearance, but only watched. Good to see Kyrie participating, even if lightly, too.

At some point shortly after the regular five-on-five began, the stream stopped, so hopefully there'll be another video of it posted.

Looking forward to seeing some good collections of photos from Day 2, but in the meantime:

Some footage of shooting drills (blue team was on one end, white on the other)
Read on Twitter

Excerpts from the one-on-one and five-on-five portions of practice (not sure about the dramatic music...)
Read on Twitter

Ime sighting (I thought I saw Will Hardy in the video of Day 1, but either he's got a doppelgÃ¤nger at the mini-camp or he's there in an unofficial capacity)
Read on Twitter

A car for the winner of the shooting drill!

Dipo taking a breather, listening as Pop instructs the players... ... and getting muscled by him on D

I think DeMar will be fine with our O system in time. It's really the defensive end that will need consistent attention: For the rest of the Day 2 photos, go to: https://www.usab.com/basketball/media/galleries/2018/07/mnt-day-2-gallery.aspx