Well this is suboptimal and totally unexpected. I hope Beal sticks with it, but with return from protocols and who knows how his conditioning will be (this after the players are getting their legs under them), it's not necessarily a 100% given he returns. If not, then Garland has played strongly enough to merit consideration as a replacement, but then I think Booker gets the start.

this stays contained and Beal returns without any issues to help Team USA reach its ultimate goal.

Uuugh... "Thanks" Beal for **** up team chemistry with your lax vax stance and affecting others as well. *IF* he's not vaccinated, this is unbelievably irresponsible.

Grant has been terrific defensively. Hopefully this is temporary and he joins the team soon.

So long as everyone continues to stay healthy, so be it. But I hope Beal is taking a good hard look at himself and the ripples his choices have caused:

Sunday's game versus Spain is still on so that's good.

What did Beal do besides get covid?
Top

Well... get Covid. It's speculated he's not vaccinated based on how flippant his wife has been towards the vaccine on twitter. And so he won't be on the team going to Tokyo. It affects the early team chemistry, forces the coaches and brass to look for replacements at the last minute, and another player to go into Health and Safety protocols (Grant tested negative) all the while the team misses crucial practice games before the ones that count. I'd say that's a lot.

I've mentioned in the exhibition game threads how badly Love has looked on the court. He has international play knowledge that he was imparting to this group, so to the extent that he was with the team, that was a benefit.

And I think Team USA has have enough stars and scorers. It needs solid role players for specific match-ups and relentless dogs like Keldon who never give up and who's energy is infectious.

Important gel game to see how the new players are fitting in and what the rotations will now be. Basically the more guys can get used to playing with more team mates the better. Versatility and reliability regardless of sub are key.

Missed shots, need more physicality and gelling as a team. Six-point early lead, but it disappeared quickly. Now it's a good test to see how Team USA can play hungry to catch up from a deficit.

1-12 from 3 to start was rough. Team USA increased their physicality, got into passing lanes, got to the opponents on D as the pass got there to prevent easy drives. I thought Team USA still settled for outside shots a bit too much, but they kept at it and finally made some 3s. Rebounding by committee needs to be stronger, more physical, and pushing harder in transition to beat opponents down the floor can be better.

Keldon in, Keldon making an impact on D!
Read on Twitter

Much more physical D, much better transition push, and better ball movement. I still thought Team USA settled for outside shots too much to start the Q, but X-Factor Keldon and his great drives and 10 points spurred a scoring deluge. He was able to get behind Spain's D into pockets of space that team mates found him in and he finished with characteristic wanton abandon and bull strength that surprised opponents. Better effort rebounding. Justneed to stop settling for outside shots so much and set up shot creation sooner.

Score actually doesn't indicate how out of hand the game had become for Spain. Team USA built a sixteen-point lead and held it rather comfortably, if not easily. Team USA still had to work for possessions with defensive intensity and O ball movement. In terms of both, this was Team USA's strongest game which is a great sign given the challenges and changes the team has faced recently.

Homer fandom aside, Keldon played very well. He fits the team because he doesn't need the ball in his hand, gets into open spaces, can finish at the rim, contest there, is a physical presence in the post - he bodied both Gasols! - gets after rebounds, dives after loose balls, hits 3s, you name it. All that with relentless energy. He was the leading scorer with 15 for a while until Dame went Dame mode. Keldon fouled out when he bodied Marc Gasol who threw Keldon to the ground but got the foul call against KJ. In international play, a player fouls out on the fifth foul, so he and Lavine fouled out. But it's clear that Keldon's presence opens up opportunities for better movement on and off-ball. Team USA doesn't need another ball dominant player. Beal actually averaged the fewest assists from all of the PGs on the team, and averaged fewer than several other players, too, like Durant and Green. Having a role player who does all the dirty work but also can make impact plays on both ends feeding off their passes or taking advantage of the attention they get can only benefit the team.

From that on and off-ball movement, Lavine had his best game, too. Curtailed by early foul trouble, he finished strong late. He's excellent from the corner 3 and his team mates kept finding him in that spot. Team USA was as dry from the 3 in the first half as it was hot from the 3 in the second half. Team USA was better in its speed, crisp ball movement, weak side cuts, swings, and points from behind the opponent's D.

And it was these cuts and points at the basket that helped open up the arc. The drives and kicks and swings were all the more effective. Simple plays, but guys got to the open spaces off ball really well and hit their shots. When they didn't, there was better hustle in going after O boards, and crashed-by-committee on the D boards.

On D, Team USA got back well, got into passing lanes, switched well, collapsed in help D and recovered well and protected the rim well. Some good steals resulted, but lazy passes ahead resulted in turnovers. So some things to work on.

Durant and Lillard were hard to stop as scorers, and when they were their team mates did a great job not standing around as before and were threats off of their solid passes.

There's still room for improvement in terms of getting hands up and having arms out on D for a more imposing presence and limiting angles and passing lanes all the more. At times they allowed open Js around the key from simple P&Rs, so whoever needed to rotate didn't. But later Team USA imposed its game on both ends and forced secondary options and turnovers. It was good to see a higher gear and more competitive physicality which resulted in getting after it collectively on both ends. At one point it was a fifteen-point swing against as Team USA was up six points then down nine. From this point, Team USA fought back to bring it to within three at the half, then pushed hard to build a sixteen-point lead, a 25-point swing. The best part was that the team is playing more like a team at the right time, and there are still more quality players to join what is already clicking well.

The more time they have together, the better the crispness of the O and stinginess of the D and physicality and team play throughout will be.

Team USA departs for Japan tomorrow and will have a week to prepare for its first game. That they've weathered some challenges and come together so well is a huge positive. And since they've already incorporated new players on the fly, there's experience in being able to do it well with the three players who will soon join them.

So Grant is traveling with the team to Tokyo having cleared quarantine. Well he played last night so, of course, I thought, he's good to go.

But then Zach played with the team last night, too, and

Zach is actually an important part of the team with his athleticism and outside threat from the corner. Damn it. I really really REALLY hope he's good to go soon. He apparently had Covid like two months ago, so hopefully this is just a precaution.

Here's to a full healthy Team USA rolling together at the right time!

I somehow thought that they'd be there by Friday given the series went six games, that contingencies would be in place whenever the series finished, but it's also understandable that they'd all need a couple of days to decompress. And so here's to their quick adjustment and seamless fit on Team USA in Tokyo:

After a long trip, Team USA arrived in Japan:
Read on Twitter

And a quick turnaround:

I love these official uniforms! 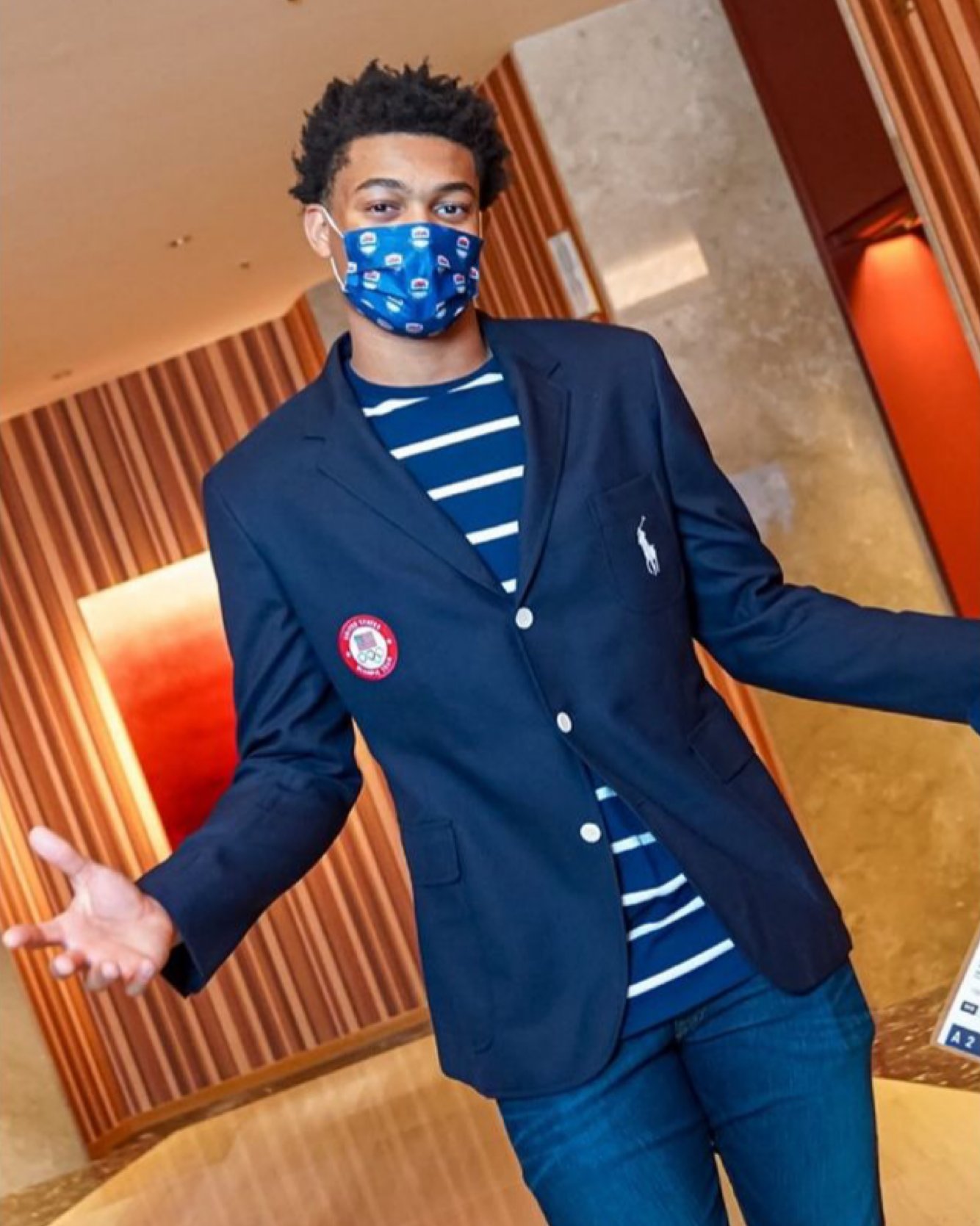 The final three Team USA players arrived early Saturday morning. I love that Pop was there to greet them! They missed opening ceremonies but two of the three did have a championship celebration to attend. The third joined them on the flight over oof! but I hope they all are greatly motivated to play for Team USA and energized by it.

And hopefully they'll be energized long enough to contribute before they need to align their circadian rhythm because we're now embarking on the games that count!