Dedicated to this season's Spurs news, we start with word that Dejounte had his surgery today, and most importantly, it went well.
Read on Twitter

The repair work done, sending good thoughts for the recovery to better than ever!

dejountemurray I Thank God For Allowing Me To Have A Successful Surgery. I Feel So Much Better Now That I Can Move Forward And Focus On Taking My Time Rehabbing And Getting Back On The Court To Do What I Love To Do. Thank You @jillyanais For Being Here For Me No Matter What, You Are A Great Girlfriend And I Look Forward To Growing With You In This Beautiful Thing Called Life!! â¤ï¸ Also Thank You To Everyone Who Has Been Sending Me Their Prayers And Well Wishes! #ThankYouGod

The first set of the new H-E-B commercials are here!

Three new commercials will air during our second game tonight.

The next H-E-B set of commercials was shown:

New era, same culture being instilled by our longest-serving Spur:
Read on Twitter

An insightful article about our pace:

The NBA Is Playing At A Blistering Pace, But The Spurs Are Taking It Slow

But through three games, San Antonio has been content to simply run its half-court offense â same as always. The Spurs have been in transition just 5.9 percent of the time this year, according to Synergy Sports Technology â the NBAâs lowest rate by a mile, and a low figure even for this team, which has always played at a slower pace....

But on the flip side, the tortoise-like pace also speaks to San Antonioâs comfort in its own skin as it begins the campaign. While some teams are playing faster than they should in hopes of bypassing half-court possessions with still-unfamiliar teammates, the Spurs arenât....

Most clubs have gone all-in on creating looks from 3-point range in recent years, yet San Antonio is still taking an enormous number of midrange jumpers â a whopping 28 attempts per game, almost six more than the next closest team. While certainly unusual in the current NBA, itâs also not that surprising....

The upside in all this so far is that DeRozan looks pretty comfortable in this offense already â something Popovich deserves credit for after insisting he wouldnât tinker much with the guardâs game. The Spurs have put the ball in DeRozanâs hands a ton early on (to some extent theyâve had to, because of how short-handed they are at lead guard), and the early returns have been better than anyone could have realistically expected.

Aside from him scoring plenty on his own, DeRozan is averaging nine assists a game through three contests and is coming off a career-best 14-assist showing against the Lakers. An NBA-best 26 percent of his passes are leading to assists,3 according to Second Spectrum and NBA Advanced Stats.

DeRozanâs game expanding would certainly fit the Spursâ adaptive nature over the years, as the club has shown the ability to evolve in a handful of areas, from the sorts of lineups they use and even the way they prioritized ball movement during a time where hero ball was expanding. Yet for all the flexibility the Spurs have displayed at times, certain things almost never change for this club, and in a way, Monday nightâs game-winning shot was further evidence of that. Popovich, knowing that the Lakers would be keying in on Aldridge and DeRozan (who had 37 and 32 points, respectively), called a misdirection play involving them and guard Patty Mills. The look it produced, naturally, was an open shot from midrange....

And perhaps thatâs the beauty of this Spurs club. Popovich and his players have shown that they can flip the script when necessary to fit the rest of the league. But they clearly have no problem pulling a number of old and, sometimes, slow-paced tricks out of their bag.

Sending good thoughts to Derrick for a continued recovery, full and timely to better than ever:
Read on Twitter

LaMarcus Aldridge is taking it upon himself to make sure the Spurs improve defensively.... With so many newcomers on the roster, coach Gregg Popovich is preaching patience, saying the defense will get better in time. Aldridge agrees and is taking a proactive approach to aiding his coach in that task.

"It's a new group, so it will take time to build chemistry and to instill the new principles that we have here defensively," the six-time All-Star forward said after practice Thursday. "It's going to be a process and we all have to lock in on it and focus on it to get better.

"...There are no excuses â we have to be better. But it's teaching guys the new ways, and guys who have been here like myself and Patty (Mills) have to take ownership in trying to make sure guys are in the right spots."

"LA is our first line of defense when it comes to being vocal," Cunningham said. "He's the man in the middle, so he sees everything before it happens, and he's loud enough and he communicates very well with us to allow us to be able to position ourselves. He coordinates things."

And a couple of post-practice interviews:

I'm not a sneaker connoisseur, but these look elegant and clean. Love the Spurs fiesta colour tribute:
Read on Twitter

EDIT to add a second fiesta pair:
Read on Twitter

An interesting look at Drew Eubanks, what got him here to us and why we like him:

A hard-throwing pitcher as a youngster, Eubanks didnât start playing basketball until his freshman year in high school. But make no mistake. As much as he sometimes pines for a glove, a ball and someone to throw to, Eubanks is 100 percent devoted to basketball and the Spurs.

âOnce youâve been doing something for so long, it never really leaves you,â he said. âBut Iâm all in on this. I like where Iâm at, and I feel like Iâve got the resources around me to improve and to get more out of basketball and to give more back to it.â

âHeâs a guy you almost have to tell, hey, slow down a little bit, because he has such an earnest energy to him,â Hardy said.

Undrafted out of Oregon State after a junior season in which he averaged 13.2 points, 6.8 rebounds, 1.1 assists and 1.7 blocks while shooting 62.4 percent from the field, Eubanks arrived in San Antonio with a chip on his shoulder after the Spurs signed him to a summer league deal....

âHeâs a guy that can take a hit in a game or get dunked on in practice, and it doesnât faze him at all,â Hardy said. âHe just goes right down to the other end. He can take an elbow in the face in the post and doesnât say a word, doesnât complain for a call, doesnât look at us like, âHey, did you see that guy elbow me in the face?â He just keeps moving.â

Eubanks, 21, sits next to Gasol in the locker room and often picks the 18th-year proâs brain. Heâs also developed chemistry with Aldridge, who he said is âalways looking to make the right play.â But the big man who may have helped Eubanks the most is Spurs legend Tim Duncan, who frequently participates in practice.

âHeâs always watching me, always giving me pointers,â Eubanks said. âIf I have any questions, I can always go to him. Heâs always more than happy to answer and give advice....â

âHeâs wonderful,â Hardy said. âWe have enjoyed working with him every day, and I think he could really have a nice career if he keeps working his butt off.â

GREY 1769 wrote:I'm not a sneaker connoisseur, but these look elegant and clean. Love the Spurs fiesta colour tribute:
Read on Twitter

EDIT to add a second fiesta pair:
Read on Twitter

These are nice.
Top

The spurs.com video section also has interviews with Rudy and Bryn from the shootaround.

Apparently two new jersey designs are coming our way: a cammo and - hopefully! - a fiesta.

Spurs fans will see a new jersey look on Dec. 26, according to an NBA website.

As uniform watch Twitter user Paul Lukas, known as @UniWatch to his followers, pointed out, this edition may be the team's "Earned" uniform â an option unlocked only by franchises that made the Playoffs. On the LockerVision site, the edition is labeled as "coming soon."

Fans hoping for a "Fiesta" colorway may still have a chance to see the Spurs sporting the vintage look. According to LockerVision, the "City Edition" jersey will debut 0n Nov. 10 as the team plays the Houston Rockets.

Looking forward to a sneak peak of the fiesta uni, too.

Ugh, I hate the camo look for those jerseys. Ugliest in the NBA.
Top

Donald Kaufman wrote:Ugh, I hate the camo look for those jerseys. Ugliest in the NBA.

Yeah I thought that one might be a black and white photo, but it's really a matter of which one is disliked least. I get it, it's an important part of SA and it is great to honour those who serve. Still looking forward to a fiesta version. I think many fans are hoping for another series of those.

The shoe game is on.

GREY 1769 wrote:Yeah I thought that one might be a black and white photo, but it's really a matter of which one is disliked least. I get it, it's an important part of SA and it is great to honour those who serve. Still looking forward to a fiesta version. I think many fans are hoping for another series of those.

I like the idea of a fiesta jersey. Can't wait to see what they come up with.

Found this on Reddit, just a concept but pretty nice: 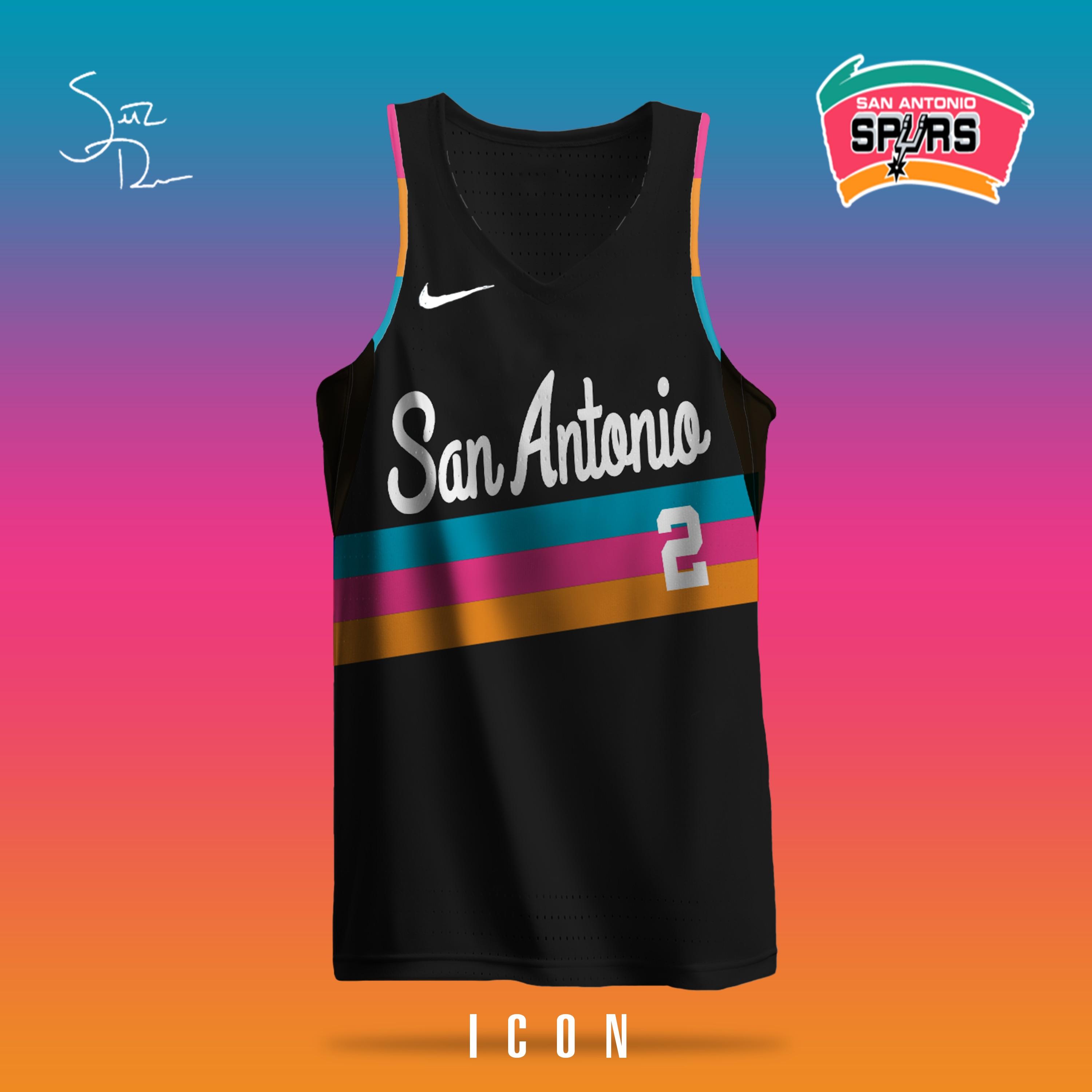