Let's try this again, shall we?

The game is such today that even bad or new teams rely on spamming 3s be it as a first or last resort. And no team exemplifies 3-on-steroids more than our upcoming opponent: different personnel; same concept. Maybe we didn't expect to defend the perimeter as much in the previous game, but we certainly know what to prepare for in these last two pre-season games. 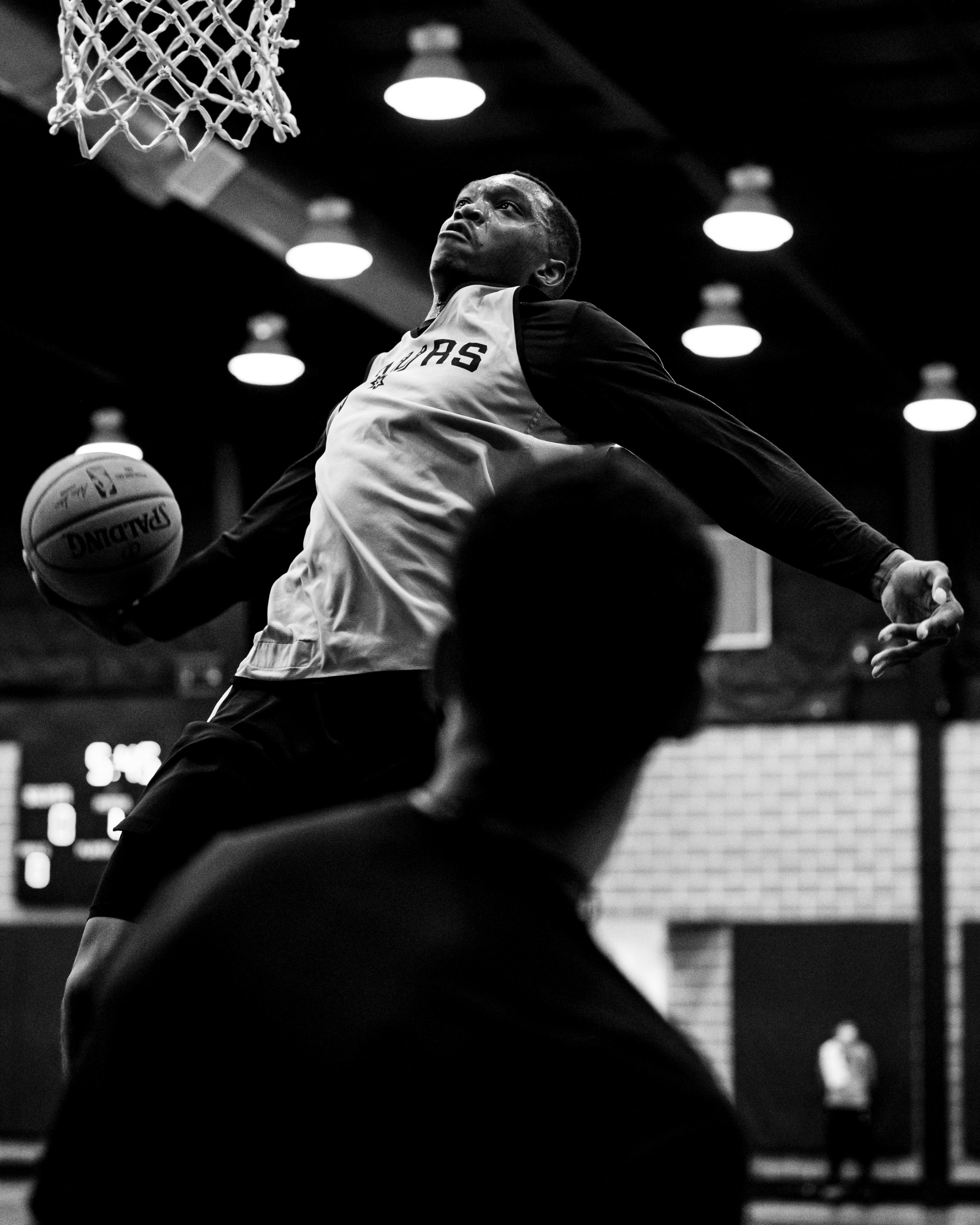 Damn. Derrick's been out almost four months now and he's not even on the floor yet.

Great to hear that Keldon is soon to return.

We put up 13 3s in the 1st Q and only 5 in the 2nd. Seems kind of important against this team, and one difference maker in the lead shift.

Another is they're getting too many O boards. They're outrebounding us 7-2 in the first half.

Patty is uncharacteristically erratic, losing that balance between poised and chaotic energy leading to TOs.

Second unit not used to playing with one another. It'll take time.

Pop has a line-up of DJ, Patty, Tre Jones, Trey, Jakob out there now. Hobbits and Giants. Straight up trolling fans now hahaha!

GREY 1769 wrote:Patty is uncharacteristically erratic, losing that balance between poised and chaotic energy leading to TOs.

GREY 1769 wrote:Patty is uncharacteristically erratic, losing that balance between poised and chaotic energy leading to TOs.

lol relative to what we usually get from him

Even though he is taking his lumps tonight, Don't you just watch glimpses of Jones and think "if only Murray played that way"?
Top

Note that Devin led the team in minutes tonight. Loving his two-way game. Loving that he's getting minutes, too!

With Derrick and Keldon out for now, Devin is emerging as an important defensive factor to keep us steady.

Trending in the right direction, though Pop said in a post-game interview that he wants the team to shoot more 3s:
Read on Twitter

Some improvements today, starting with the first unit: I love that Lonnie joined DJ in the back court. I guess LMA, Rudy, and DeMar will be starting at least for now? Pop did say that today was more about trying different groups of players together and that the final pre-season game on Thursday would feature more of the rotations we'd see in the regular season, so some clarity will come soon.

We had a solid first quarter, put up a whopping 13 3 attempts and connecting on 6. We showed some nice crisp passing and ball movement and decisive action with the ball whether shooting of driving. I didn't like DeMar walking the ball up the court as I'd have much preferred to just put our up-tempo style out there, but it was clear we also played at a faster pace. Even with Patty's too erratic energy, overall we were a more focused, cohesive group.

Getting outrebounded in our end by a single player (albeit a beefy one) with Spurs around him is a carry over from the previous game that I home we are mindful of improving in the next ones. Also, our 3 attempts dropped down to five in the 2nd Q, as some of our old habits of over-orchestrating a shot crept in. I do love that we showed some disruptive team and individual defense to force turnovers and get transition points.

The 3rd Q was marked by a sloppiness in passing, turnovers, and execution that marked the descent for the rest of the game and a contrast to that sharp 1st Q all the more. Line-up changes? Sure. Guys not used to each other? Ok. Opponents played harder? Maybe. But a lot of these were self inflicted in part from incorporating a new style of play at a faster pace and frankly a lack of focus.

It's not always going to be as in the best parts of the game, but it shouldn't be 20 turnovers for 23 points against for the whole game poor either. This, along with an abysmal 16-27 from the FT line (Chip must've been tearing his hair out tonight) and 59-38 against in bench scoring were weaknesses in three areas that are usually our strengths.

Individual play. I went at LMA harshly in the last game, but I'll mostly leave him out of this even though hewas 2-4 in the 1st Q and then 1-6 the rest of the game (didn't play in the 4th Q). At least he didn't take the most shots in the game, right?

It's hard not to focus on guys whose shiny new contracts start this season. I agree with what gump sees (or doesn't see in DJ) but then I look at his stats and he was a solid 13 (5-10, 1-3 from 3, 2-2FTs) with 7 assists, 5 boards and a steal in 25 minutes. That's good work. He did have 5 turnovers (team high) and was 2-4 just at the rim, so his finishing still needs a refined touch - that's both in scoring and in some errant passing. But I liked his refusing LMA's screens a couple of times and driving - some good decisions there. I also really liked when he went at Lonnie in the 3rd Q for missing a D assignment, not angrily, but you could tell it was a moment of accountability - good decision there, too, albeit in another capacity. I think Derrick makes DJ's strengths shine all the more because DW is the more reliable floor general and so DJ is more free to be his best instinctual, risky, more off-ball self. He's terrific reading and reacting and with DW's vision, they mesh really well together. Fingers crossed Derrick returns sooner than expected.

Jakob was the odd man out of the starting line-up in favour of Lonnie but whether he starts or not he is giving similar efficient if insufficient O production. I wish we could include him more but between LMA needing to get shots, Trey desperately trying to score from anywhere, and Rudy capable of creating his own shot, there wasn't much left again for Jakob. He can't pass the ball to himself, gents. He only played 16 minutes, good for 9th on the team, so it was a lighter night for him. Odd, though, I thought we could have utilized him more down low when they went small like we did LMA, but it wasn't to be in this game.

Trey. *sigh* I know he's coming off surgery and hasn't played competitive basketball against another team in months, but he looks like when he first got to us at the beginning of last season. I don't know if he looks at coming off the bench as a demotion and it's in his head, or he needs to get his legs under him or what, but he was bad tonight. Like team-high -14, I can see why two other teams moved on from him bad. The contrast stands out all the more because we've seen him play a lot better and you can't help but think where'd that guy go? It's a good thing he was 3-6 in the 4th Q, because he was 0-for-everything before then. Confidence is something that really shows on him physically. He plays so much smaller than his frame. When he shoots he directs the ball in; you can almost see the thinking and self-consciousness with each release, rather than letting it fly. And when he's in the key he arcs down making himself smaller to get away from defenders rather than imposing his physical presence. It's not a philosophical dilemma; just throw yourself out there and play hard. See: Eubanks, Drew. Those Trey mid-air passes as well as his hands behind his back as an opponent laid the ball in will earn some film session time in practice, I'm sure.

Even with three vets still starting, it was clear based on minutes and shot attempts that they younger guys were to get the bulk of the opportunities. Lonnie was inserted for the D, and with his 3s, tighter handles and better touch finishing at the rim, he has made some nice improvements. Still, there were a couple of instances of poor defense that stood out. One was when DJ made sure Lonnie knew that just swiping at the ball as the driver at the rim who got the +1 was a lazy play; later Lonnie just let a guy drive by him with his hand up in the air which was more going through the motion than contesting effectively and allowed a layup. Like with Trey, it's not that he got scored on, but that he didn't try to stop it as well as he can. They know better by now.

Devin. Hard not to gush. His handles need to get better, and he'll become a better passer in time, but he stands out as the disruptive D x-factor already, and his hustle of diving for loose balls and running out in transition show a fine blend of instincts and learning. He was taught well and is using his strengths to help the team. Give that spirit of competitive desire to Trey and Luka and they force Pop's hand to play them much as Devin already is. Four steals to go along with 50% shooting (also from the FT line but a forgivable anomaly especially all that he's shown so far). Thank goodness we have him while we wait for Keldon and Derrick to return. And when they do, the combination of DJ, Derrick, Lonnie, Keldon, and Devin, and Jakob is going to be a nightmare defensively for opponents.

The vets may be in a transition to hand it over to the young guys, but their savvy stands out when they're not in, too. We have trouble scoring and tend to pass the ball around to get it away from defenders rather than with a purpose to execute something planned. We not only put up 13 3s in the second half (fewer than in the first), but we made only TWO 3s.

A true go-to or two scoring threat has not emerged yet from the young group. Certain guys are carving their identities: DJ who led us in assists with instinctual defense and a raised floor from where he started; Lonnie who led us in scoring with out of this world athleticism and an improving skill set; Derrick the charge taker and Keldon the relentless motor with their all-around two-way games, each with the ability to make key impactful plays; Jakob the rim protector; and now Devin the solid hustle 3 and D already. It's a fine collection of talent, and that we can do it by committee is an identity in itself. But it's still at a stage where at times guys are looking at one another to be the one to do something on O. It'll be interesting to see who can grow in what areas as the season progresses.