Fresh on the heels of our first home win we're turnstiling out the door for our first SEGABABA on the road. One challenge after another. May as well get used to adjusting now. With some positive trends already in how we're playing in this nascent season, there are also aspects we can sharpen like starting strong and having more crisp D rotations throughout the game. Let's get after it! 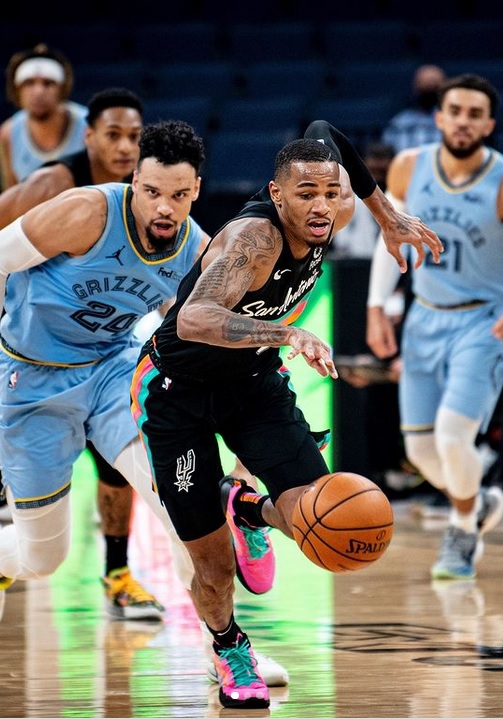 We're all in on bubble play regardless of opponent. I love it!
Read on Twitter

On paper it looks like Hobbit ball vs. giant ball...

Let's pick up the hustle and precision. Also, some downhill transition pushes would be good, too. We're getting lulled into their slower style. We can do it, but we need to exploit our other strengths.

I know it's a back-to-back that we had to travel for, but if we could just pick up the energy and pace we could be up by double digits easily. We're letting them figure things out, getting beaten down the court, beaten inside, not driving, not using our speed. The hustle is in part a mental hurdle we need to overcome. Bring it, Spurs!

This is ours for the taking. We have to want it more. It's a mental aspect now.

SO FRUSTRATING WATCHING LMA OUT THERE WALKING - WALKING THROUGH ROTATIONS, NOT GETTING BACK ON D LEAVING KJ TO DEFEND ZION DOWN LOW, MAKING BAD PASSES. JUST... GET HIM OUT OF THE GAME!!!

PLAY GUYS WHO HAVE SOME ENERGY RESERVES - KJ, PATTY, TREY, DREW, DEV, SOMEBODY!

LMA goes out, another run by us. Time and again. Time to discuss a bench role for LMA until he 'gets his legs' under him. Yesterday he had a redeeming O reb putback. Tonight it was a worst-of on full display.

We can and will do better. On to the next one...

Keldon, Lonnie, Vassell, Derrick. Man this team will be fun to watch! especially when Lamarcus sits. Just picked up Poeltl for my Fantasy team after that blocks to Zion and some assists.
Sam Cassell, Cuttino Mobley, Shaun Livingston, Corey Maggette, Chris Kaman.
Top

Hi, do you think i'd let KJ to hang in waiver wire? Especially after that bubble performance?
I picked him before the opening game with my last pick

Hi, do you think i'd let KJ to hang in waiver wire? Especially after that bubble performance?
I picked him before the opening game with my last pick

So about this game: I hoped for hustle, but we started and but for a couple of runs that fell short, ended in what seemed like trying to run in waist-high crude oil. These poor starts were eventually going to catch up to us, or rather at some point we would not be able to dig ourselves out of an early deficit and here we are. Game three.

The thing is, this game was there for the taking pretty much the whole way through. We simply settled for going at their pace rather than imposing our own. We know we have another gear, another way of playing, but we hardly used our transition game. The 89FGAs - off from the 95 and 100 in the previous two games, the no Qs with at least 30 points, and the 36 attempts from the 3 - up from the 25 and 34 in the previously two games respectively, point to a pace that never got our to our top gear and instead relied too heavily on bailout 3s. We were off balance for most of the game.

How many games before we address the giant elephant in the room that is LMA's atrocious play? This game was the most glaring because he had no redeeming plays to contribute here and there. To Pop's credit, LMA didn't play in the 4th Q. Jakob doubled LMA's scoring on one fewer shot attempt, and doubled LMA's rebounding in three extra minutes played. The skinny is that we keep starting with deficits largely due to LMA's D which isn't being mitigated by his O. It's like he has no joints in his legs. Really bizarre drop off. People keep saying 'it's only three games', 'he always starts slow', 'he's been out nine months and needs time to get his feet under him'. It's actually been six games since he played all of the pre-season games, and he has supposedly been hitting his shots in practice. Soooo given that DJ got a bench role when he was struggling, is it inconceivable to expect the same from LMA? Like for the same eight games that DJ did? Or, say, even five? A lady can dream.

Both LMA and DD struggled, with the latter doing his patented no call on one end leading to a frustration tech followed by dumb foul on the other. This led to FIVE consecutive points for the opponent (they missed one FT) when we were up by one point, and in a game that was decided by three points. Just **** spectacular.

DD's been great in the first two games and LMA had some competent plays but they combined for 12 points on 5-19, the first time at least one of them hasn't scored in double figures. DD still led us with 10 assists, so he made more of other aspects of his game that helped us. We have a more egalitarian style, but still expect a basic competence from the most prominent vets. Scoring droughts happen, but at least don't hurt the team on the other end.

We are already down ten fewer games than a normal regular season, so for both LMA and DD these patterns need to not cost us games. Every games counts all the more this season. On the one hand, this was a travel game of a back-to-back so that takes some getting used to after not playing so long. On the other, it's only the THIRD game of the season!

It's tricky balancing that sense of letting one slip away with being a bit more understanding that it's early days and we're still growing together. Still, things like Keldon having an absolute beast of a game while guarding and largely stopping Zion was such a huge positive:
Read on Twitter

He looked sort of drained and upset in the post-game interview, like he did more than his fair share to help put us in a position to win, and who could blame him. Amazing play.

It was offset by a final screw up of the last shot attempt. We not only had a couple of open players (ie/ DJ on the weak side), but also messed up in that Lonnie could have driven for a quick two, and DD put up a contested 3 with five seconds left on the clock - poor shot selection compounded by poor shot clock management after a poor inbound. Frustration all around with one final missed opportunity.

Let's hope that's more contagious going forward. To that end, if LMA could ever accept a few games off the bench that would be a positive development. Couldn't hurt to try. Trey needs to play with some more controlled desperation, too. Luka needs to lay some hard D on someone or dive for loose balls or make some thunderous dunks or all three in practice as well. I feel like they need to make Pop play them and in pushing for more minutes for themselves the corollary is fewer for LMA.

He is playing less, but his usage is still 22.9% so far, barely a dip from last season's 23.4%. There was a bigger difference from last season and 2018-19 where he averaged 26.9% and 2017-18 where he averaged 29.1%. But in the latter two seasons, we were severely undermanned losing around 200 games due to injury, so he and DD were relied on heavily to carry the load and to their credit they did a great job.

However, this season LMA's numbers are glaringly lower on only slightly less usage: 12PPG / 4 boards / 2 assists on 42.1FG%, a woeful 18.2% from 3, and a surprising 66.7% from FT. So even the areas he was usually steady in throughout his career - 2s and FTs - he is worryingly well below his averages. These are in 7 fewer minutes than last season, but it's the drop in efficiency that stands out.

I thought that Drew, our wrecking ball of constant energy, would get a look in this game considering how neither LMA nor Trey were doing anything constructive. After all, it was Jakob and Drew who put in the yeomen's work in the bubble, and both re-signed with us for the next three years.

Is it in any way concerning that our starting front court of last season is so limp so far this season? (And yes, I'm taking LMA's and Trey's surgery recoveries into consideration). Or is it a sign of positive change that we've moved on from them? Is it both?

With all the things that went wrong, we were still within a basket to tie the game. I did like that we used zone D to take them out of their O rhythm, and it was clever after their timeout (likely to go over how to deal with zone D) and we then switched to man D again. And we did go on a great run late in the game, but just came up short. I feel like this opponent will be less vulnerable to take advantage of later in the season, but then again, so will we, and that's the takeaway we have to carry with us to the next games. Stay hungry, learn from the mistakes, change what's not working, and implement it. Finally, Derrick can't return soon enough. I'd love to see what a full team with options at each position and full energy can achieve.