Expected Memphis/Utah lineups at time of this post (a fixed image from Rotowire): 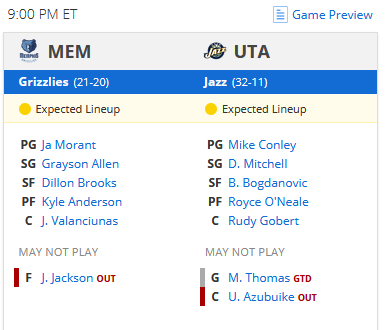 for some reason, I have a feeling that Bogey will shine in this game.

If he's not, bench his ass so he can fix his wrist

@ndrew wrote:for some reason, I have a feeling that Bogey will shine in this game.

If he's not, bench his ass so he can fix his wrist

Good luck tonight! And I agree it feels like a Bogey night though usually it is a much more random player that torches us lol
Top

Bunch of non calls at the end but good game.
The artist formally known as Underkanter.
Top

Heck of a game guys. Can't wait for round two tomorrow
Top

That was a fun competitive game even though the Jazz were way too sloppy, good job by the Grizzlies on never giving up. I feel that Quin's rotations were at least part of why the game got to be too close down the stretch, it always seems like he waits too long to get Gobert back in there in the 4th and that lineup with Mitchell and Clarkson sharing the backcourt was killing both perimeter defense and ball movement. I get that Conley was struggling all night long but if you're playing them both together, unless JC is shooting the lights out, IMO you at least need Joe out there to balance it out.

Donovan made up for it with some great clutch buckets so can't complain too much about it. Compared to previous games Bogdanovic was just taking what the defense gave him rather than forcing drives which is good, I'd still want him to be more aggressive when shooting from outside, he passed up a couple looks from 3 in the second half and we just can't have that.

Morant is a beast. Incredible athlete with no fear whatsoever and amazing passing instincts, so much fun to watch. Hopefully he stays healthy though because that playing style leads to a lot of potential physical issues.
Top

Nice game from Gobert on both ends. I am glad guys were looking for him on offense. Gobert went 4-4 in Q4. This was only the second time that Gobert convincingly outscored JV in a head to head matchup.
Top
Post Reply
11 posts • Page 1 of 1