I have us getting McDaniels, Harris, and Azubuike (bought pick with cash) in latest mock. Don't hate it. Don't love it.
#yeezy4prezzy

Hey guys, I just added a new feature to my site that let's you compare two prospects side by side here: https://nbadraftcomp.herokuapp.com/compare

Probably one of the cooler tools I've added.

If you don't mind checking it out that'd be amazing!!!!

That is very nice & handy.

Brandon Clarke has a 7-5 lead by category and overall. Of course stats have different levels of importance.


Bey compared to K Faried is a better shooter / passer but with a lot less blocks.

my... THUNDER BIG BOARD (by position)
...separated by tiers

Just finished up the latest changes on my big board (top 75). Still thinking a little about back end of second round, but overall, I'm pretty locked into this board until new info comes to light that forces my hand and/or someone can sell me on why player X should be moved up/down. 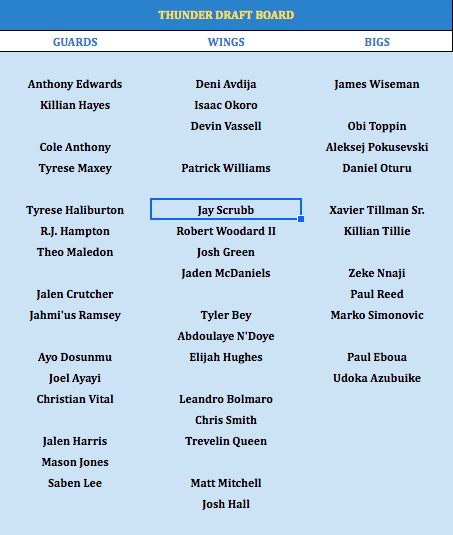 I'm currently managing OKC in a DraftTwitter mock and Maledon just fell to us at #25.

If Maledon wasn't there, it would have been between these guys:

â EDIT: Oturu fell all the way to 51, so I nabbed him there. Gave N'Doye some consideration but Oturu was a tier higher and I like his ceiling/median outcome a little more.
#yeezy4prezzy

Without a move (up or down) or major slide, I think the choice should be between J Smith, T Bey, D Bane, P Reed and maybe Bolmaro.
Top

jambalaya wrote:Without a move (up or down) or major slide, I think the choice should be between J Smith, T Bey, D Bane, P Reed and maybe Bolmaro.

I don't trust Jalen Smith on defense. His lower body is so thin. I don't like the idea of drafting 5s who have his body type. I don't see him as a big 4.

Reed can't shoot and there's concerns about the way he views his role in the NBA that have surfaced.

Bane is overrated, IMO. Smart guy. Nice dude to have as an option off the bench. Just not my flavor.

I like Tyler Bey, but I don't see a ton of upside with him unless he improves on offense. He's Roberson lite essentially. Not sure I want another 5+ years of that.

Bolmaro is interesting and probably the only player I'd consider but he's thin and not a good enough shooter (yet) to open up creation upside. Maybe he develops that and maybe he doesn't. He will be nice in transition though.
#yeezy4prezzy

Smith and Reed both rebound, block shots and chip in scoring. So does Bey, who is a PF. Thunder need another young PF, tougher than Bazley.

Smith isnt ideal for every matchup but few are and he's close to size / mobility I prefer. Perhaps should put on 5-10 pounds / strengthen legs but see what he can do in NBA as is first.

Bane is one of the most underrated players on some mocks, imo.
Top
Post Reply
170 posts