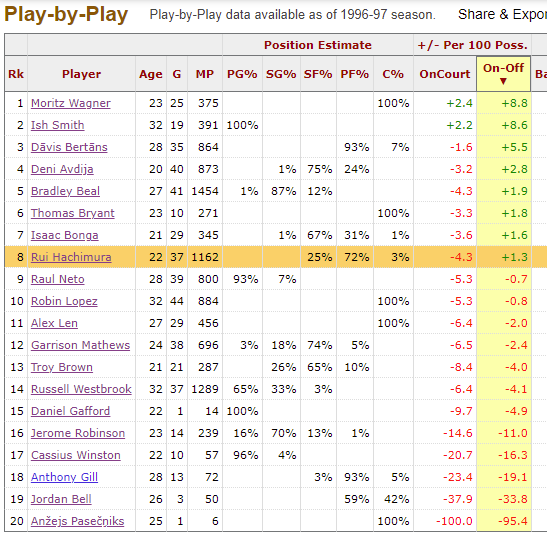 Only 7 guys have a higher on/off differential, and four of them haven't even played 400 total minutes so their differentials are heavily influenced by garbage time in games out of contention against third stringers.

The only guys with at least 400 minutes played (or 500 if you'd prefer a nice round number) with a better on/off differential are Bertans, Avdija and Beal. He is doing better than Neto, Lopez, Len, Mathews and Westbrook.

And as I've pointed out several times now, Rui is getting substantially better as the season wears on. He used to be at -5.0 rather than +1.3.

Not sure why NBA.com is different, maybe they update later?

Good question. I can't figure it out.
Top

dckingsfan wrote:This is the most interesting part of this thread. The notion that Rui could eventually be a SF.

It does seem like he can cover SFs on the perimeter. And he rebounds like a wing

On the offensive side if/when he starts consistently knocking down 3s he would be really good (IMO) as a SF in the offense.

And that brings us to Deni or the "new" PF. Deni rebounds like a PF but doesn't alter or block shots like one. Now, he is 20, so I expect to see the defensive rebounding go up over time.

Either way, it seems like we are going to have the dreaded "redundant" problem with Rui/Avdija. I guess that isn't optimistic though.

It's a good discussion of whether or not there's a department of redundant redundancies and how to minimize the negatives while accentuating the positives. To do so, the need for a shot-blocker was obvious, and that has partially been addressed with Gafford. And when all 3 can nail 3's, that goes a long way. Still, they all have to prove they're quality 3 point shooters - which may or may not happen.

Hmmm tridundant, hadn't considered that one

All I said was tridundant and boom, the thread explodes

NatP4 wrote:Beal was a lot better than Hachimura in his first few seasons and exploded at age 23 (same age as Hachimura currently)

It's easy to forget that Beal really was not very good his first few years. He looked good (like Rui does), but he was pretty ineffective statistically.

There are also many players who aren't very good their first few years, including guys picked high in the draft, who never become very good. Thus, this comparison is obviously completely meaningless! It indicates nothing whatever about Rui -- neither anything real nor anything potential.

Brad was taken #3 in 2012, but Dion Waiters was taken #4. Thomas Robinson went #5. Austin Rivers was taken #10. Why aren't you using Waiters or Robinson or Rivers as models for Rui's development?

Just as in the case of Beal, a *negative* comparison of Rui with Waiters/Robinson/Rivers would also be meaningless.

A player can only be good if his numbers are good, because that is what it means to be a good basketball player -- this is not ballet. We are not making an aesthetic judgment. What makes LeBron great is that he puts up great numbers. What it means to say that Troy Brown Jr. did not play well this year is that he put up bad numbers. Period.

When nate said he was encouraged, b/c Rui had just played well overall in his last seven games, he pointed out that Rui's numbers had improved in those games. He didn't say Rui had danced really well! Numbers.

If we ask "was Rui Hachimura good as a rookie?," what we are asking about is the numbers he put up. We are not asking about his performance as if it was a floor routine in gymnastics. Nobody is holding up a sign with "10" on it. Rui created the "sign" -- his numbers.

The answer is, "no, Rui Hachimura was not good as a rookie," which means he did not put up good numbers. If you think he did, then to put the matter simply you are just plain wrong, because he didn't. Go look at the numbers.

That's it, folks. That's all there is.
Remember -- if you don't like the post above: blame Doc not me.
Top

That's in a bubble. However, they don't play in a bubble. Those numbers are still useful, but adding Westbrook changed everything.
"Look, you never know when you may need to borrow a cup of sugar, maybe some milk or a handgun" - Dan C. from Texas
Top

I knew I could "count" on you, Zards!

& both you & Einstein are certainly right. For example, how good Rui is or will be can't be determined by measuring his height. So, you bet, that can be counted, but it doesn't count.

& Rui's ability to work with his coaches & teammates counts but can't be counted.

But, tell me, if I said that the only way to know how big a piece of glass to buy to fix a broken window was to measure it, i.e. numbers, would you also quote Einstein to prove that I wasn't right?

& if I said that something other than who has the most points when the horn sounds will determine who won the game, would you quote Einstein to back me up?

Basketball is an artifice, a made-up thing which was created so that the only measures determining wins/losses are numbers. & the way a team is good is expressed in its record -- i.e. numbers. Those numbers are produced by the players if I remember rightly.

In the larger universe, of course, there is much which cannot be measured with numbers, & there are many numbers that measure nothing. How good a person Rui is, for example, can't be calculated from numbers. Beauty is not a number. Intelligence is not a number.

But when Einstein read the score for a Beethoven violin sonata, & the indicated note was played with the index finger of his left hand on the 3d stop of the 2d string, he didn't tell the score that numbers don't count.

How Rui plays tells how good he is --which it expresses as numbers.
Remember -- if you don't like the post above: blame Doc not me.
Top

But, I tell you what... I take the whole thing back. It's much better for everyone to imagine that Rui has really improved a lot this year. In fact, so has Beal. & of course, last year we didn't have a starting PG really, while this year we have Russ.

All these positive things are the reason we are so much better this year. Of course, I'm sure no one would want to give Rui all the credit for the massive improvement in the Washington Wizards. But, still... just look at how we're doing, & it'll be obvious he's a future star. Well on his way.
Remember -- if you don't like the post above: blame Doc not me.
Top

Shoe wrote:Rui is getting better and better and it's making some people very nervous

Shoe wrote:Rui is getting better and better and it's making some people very nervous

Pacers game...Rui ran out of juice after the 3rd Q. He posted 24 pts and 7 rbs after 3 quarters, rested a long stretch, and then wasnt as much of a presence in the 4th. Still finishing with 26 pts on 12/24 shooting, and 8 rbs is good.
Top

This is why some teams win and some teams lose. While your debating if Rui's a good player, other teams see his potential and pounce. The dude has all the skills to be a great player.

This is one of the rare instances where I tend to side with your positivity over the general boards negativity (in the past in particular). When all I can track down are props from players, and media types talking to scouts etc, I'm gonna lean that way a bit over the other way with fans who just didn't rate him, or were dead set on landing a very specific player that wasn't him. He seems bound and determined to hit a lot of the upside/ceiling talk that many scout types, and mediots and players were suggesting he'd be over the past 18-22 months or so. By early this year, it definitely felt like he was no longer a reach and rather one of the safer picks outside of the big 2 in '19, and now he's looking even better than that. Where would he go in a redraft of the 2019 draft these days? I wonder.
Top

Has Rui improved at getting to the line, stayed the same, or gotten worse? Which one is it?

Has Rui improved as a free throw shooter, stayed the same, or gotten worse? Which one is it?

Here's another player, not going to mention his name: this year, he has gotten to the line 7.5 times per 36 minutes & has shot .893 from the line.

Is Rui better than this player overall at scoring on 2-pointers? Or do you need to know the player's name to answer the question?
Remember -- if you don't like the post above: blame Doc not me.
Top

Has Rui improved at getting to the line, stayed the same, or gotten worse? Which one is it?

Has Rui improved as a free throw shooter, stayed the same, or gotten worse? Which one is it?

Here's another player, not going to mention his name: this year, he has gotten to the line 7.5 times per 36 minutes & has shot .893 from the line.

Is Rui better than this player overall at scoring on 2-pointers? Or do you need to know the player's name to answer the question?

PIF, while your season comparisons are very insightful and goes to support the point that you're making about Rui not really being much improved between year 1 and year 2, I would like to know if your view of his last 9-10 games, roughly 33% of his total game played thus far, would indicate an improved and yet still improving player?
Just let the young boys play! It's truly the only hope at this point.
Top

Look at Bradley Bealâs scoring progression from his first and second to this season and lastâs.
Top