Ever wonder what it would be like running a team like an NBA General Manager? This league will give you the opportunity to do just that! 30 teams using real player salaries to build a dynasty. Every year league salary cap and player salaries will adjust to mirror the NBA! Think you have what it takes? Email me at rudylalanne@hotmail.com to inquire and join!

We have some openings in our Fantasy Basketball leagues for 2018:

FBF I
The Hague Storks
http://www.fantasybasketballfederation.com/FBF/Rosters/storks.htm


Our league standard is 24 teams using a Salary Cap and player salaries, all are Keeper leagues, 13 player rosters with a short/long term IR, and a Draft & Stash provision, 38 game Head to Head regular season, and 4 tier playoffs.

Membership is $15 annually for an initial team, additional leagues (including any Fantasy Football leagues) are $5.

If you are interested or have any questions please email me at FBF_Commish@hotmail.com or FBF_Commish@fantasybasketballfederation.com.

Only very active long-term managers. Still a few spots undecided. Draft in a week. No buy in, no auction.

We have a shortlist of managers for the remaining spots, but want to make sure we get the best ones in.

Looking for an additional yahoo fantasy league, roto or H2H
i'm an experienced diamond level yahoo player
Send me a pm if you have an interesting league with an opening.
someone had to be me, it might as well be me
Top

Take a look at the rules and forum and if youâre interested let me know.
Top

Hi, my long-running league just had a member leave. Have been doing it for years, buy-in is 150 with payouts going to regular-season and playoff champ and runner-up.

Most of us are close-friends from Chicago / Minnesota, but desperate for one more manager to make it 12 teams! Join in, it's a blast. Draft on Thursday night of October 17th!
In Arturas We Trust
Top

Hello to Everyone, God bless you, be safe.

My name is Ivan and i'm new on this forum. I'm looking for new GM-s for our NBA Dynasty league. We organize NBA fantasy leagues for last three years and it's success for now. This is new league that we're starting. Old one was with level leagues, 1st division with 10 elite clubs, second division with also 10 clubs, that's lower level of competition and so on. There is also paralel development leagues for those divisions where we draft only players under 150th ranking. I'm writing down all statistics that is possible for every league we play. Clubs geting medals after every round for points in round, counting club coeficient and every other stuff.

This Dynasty league will be few levels up. We'll have here every possible stat sheet also, for clubs, managers, players, but also everything else will be improved.

I will explain just a little bit of everything because its too much text in original topic on our forum. If someone is interested to join, i will explain even better and i will translate original text.

Here is our forum with original post, its on Serbian but you can see how long is league presentation. There is also explained everything about salary cap and other finances. I will not write that for now but its very similar to real NBA, something is just modified for fantasy purpose.

If you want to become a part of this forum, you just need to sign up for free and that's it.

Maybe looks like its complicated but its not. There is a lot of text because i wanted to explain every scenario. Also, we have whole first year to understand everything, and then on the start of the second season we'll start calculating salary caps and other stuff. After first year, everyone will get an advice what he can do with salary cap and budget, and then it will be much easier for incoming years. 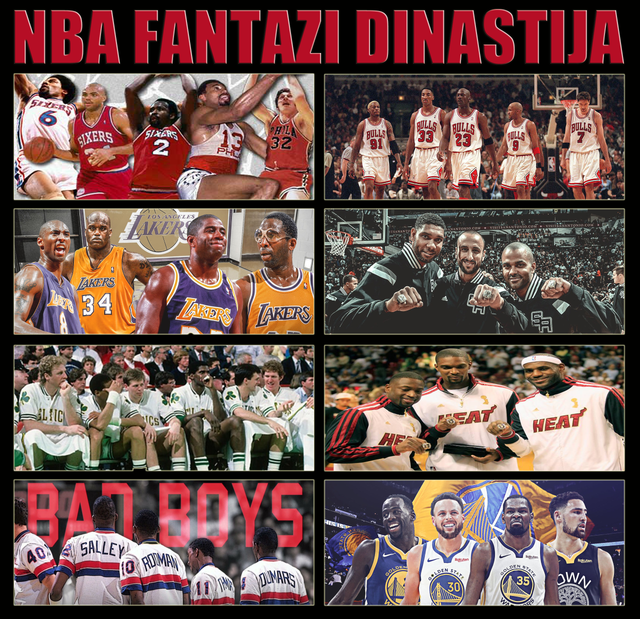 I will first fill up this recruitment sheet.

-League type: (H2H points)
-Duels: weekly, roster change before every game.
-Number of teams: 30 clubs
-Number of open spots in the league: we have around 20-25 people in our old league, and we're looking for up to 10 people for sure.
-Yearly/Keeper/Dynasty
-Where the league will be running: (Yahoo)
-Draft type: (Auction) It will be on our forum, it will be slow auction for 2-3 weeks.
-Salary cap: 120.000.000$
-Roster size: 15 players + aditional 3 spots for injured players and players without contracts + few spots for rookies.


Our league will have;

We also have fantasy ADD-ON, its a virtual budget. Everything will be calculated for you, virtual budget, salary caps, everything. You just need to be concentrated on a game and to enjoy.

You can earn money for wins, for advancing in to playoffs, for fans in arena.

You can spend money for luxury tax if you go over salary cap.

You can upgrade your arena, everyone will start with 5000 seats. Atendence will be depending on your last month results. If you have score 18:2 in november, that is 90 % of wins, so i will simulate from 90 to 100 % of arena capacity in december, i'll be doing that on random.org. I will put number 4500(90%) and 5000(100%) and we will get number between those two and that's number of fans that come on that game. If you have score 5:15, that's 25 % of wins, so i will put 1250-5000 and you will have atendence something between those two numbers. I will simulate for every single game, its very simple but nice add on for our fantasy.

You can also invest in basketball academy in every country in the world and then you can recruit one player from FA during the season if he is from that country where you open academy. He will be in your academy for one year for some small amount of money from virtual budget, and then you can sign him next year for minimum contract, and then he becomes part of your salary cap. That's just fun add on, virtual budget is not part of real players budget, players budget will be 120.000.000$ for everyone.

We will start filling this tables with aplicants, we already have around 5 aplications in 2 days. We're waiting for others from our first fantasy league that we played last few years, but you can also send your aplication and after one week you will get your team. You can choose more then one team in aplication, you can sort them on your priority.

This is playoff graphic, its just an example. 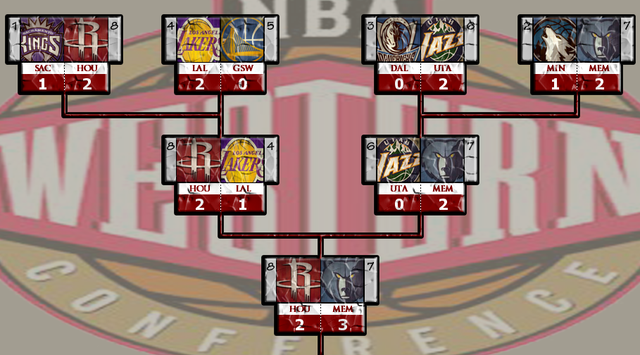 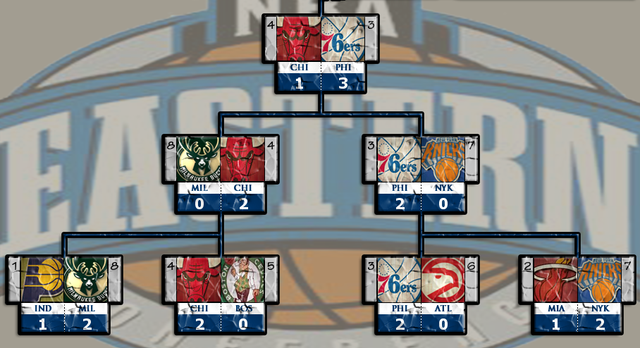 We finished our schedule for entire season. Every club will have from 3 to 6 games per week. You will need to set 30 player matches per week in fantasy and that's all, that will be your score for every oponent in that week. Everything is connected. You will have sometimes 5,6,7 games in a row on the road, sometimes at home, sometimes back to back with same oponent in 2 weeks period, its very realistic like real NBA league.

This is original schedule for our first week. 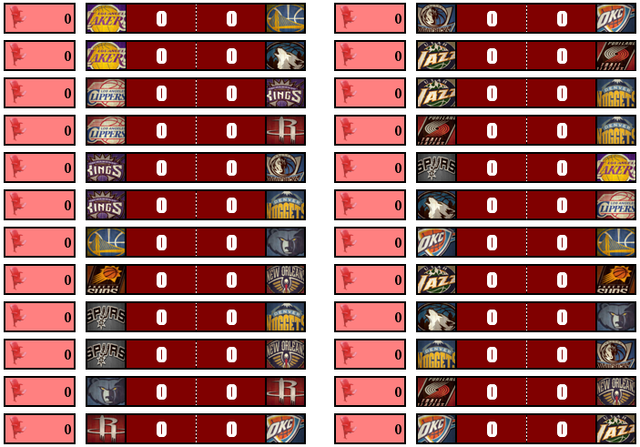 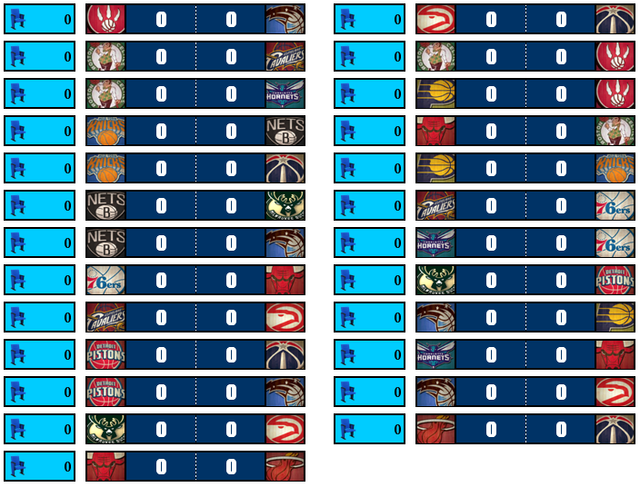 WEEK 1 - DUELS BETWEEN BOTH CONFERENCE

We will have a little different rule for draft positions. We will not allow tanking in our league. Last club in the league will not have best position before draft lotery. We will give advance for clubs that are closest to the playoff spot but they didnt get in. So, 9th rank will have biggest amount of balls in lotery, every other position will have a little bit less and so on to the last clubs in the league.

We will do draft lotery on our forum. I already darkened images with club logos, i tested and it works. I will post every darkened picture with club logos on forum, each club will have a certain number of pictures, it depends of position like i said before. Then someone who is not participating in draft lotery will picking up pictures. He will write down first which number he chose, and then he will download that picture on his computer, so i can know for sure which one he chose. He will then do a brightness on that picture in photoshop or other program, and then club logo will be revealed. We will find out who's first pick and we can continue with same patern.


There is a lot of more of everything but i dont want to write all of that for now, if someone is interested in this fantasy league i will explain everything in detail.
Top

Sorry for double post, i forgot to explain most important thing, playoffs

We tried this in some other competition and it was successful. So, we tought that after regular season and weekly duels, we start duels with 5 on 5 player matches. We will writing down on forum our starting lineups for every duel during the playoffs, every postion need one player and one of his match. So we'll have duels with just 5 on 5 matches so we can play much more duels. After week 16(RS) we have a lot of more weeks to finish playoffs. We have up to 7 weeks to finish, that is around 25 matches for every player so we can use them in our 3-3-5-5 situation or maybe also in best of 5-5-5-5 situation, which is maximum of 20 matches in the playoff.

It will be very interesting playoff with just 5 matches in one duel, it will be very exciting when you follow one player and his every minute counts like never before because his score is 1/5 of entire duel.

Everything will be explained even better before season start.
Top

Suns Board is looking to fill 4-5 spots in our G-League, please sign up as soon as possible:

Looking to find managers for our 8-cat. rotisserie league (Yahoo-based).

If interested, PM me and I can answer all questions and send you link to join if interested.

We will be also hosting live shows where we discuss the league, etc. so should be a fun one to compete in and I hope to find enough people who are enthusiastic enough to keep things going past this season.
[twitter] @thunder_draft
Top

Any Draft Day Sports Pro Basketball 2021 leagues out there?
âAnd where once you had the freedom to object, to think and speak as you saw fit, you now have censors and systems of surveillance coercing your conformity and soliciting your submission.â -Alan Moore
Top

im looking for a yahoo 12 team league with standard settings. im already in one but hey. doesn't matter if its keeper or not

mudsak wrote:Watching Kawhi plow through the playoffs like the most stoic gangster to walk the earth has been one of the most epic things I've watched in a while.

The RealGM Basketball, 2021-22, league was Auto-Renewed, and is now Active.

If you're interested, then please Inbox me, for the Join Link.
"It's not about me, it's about the Team."
~ Marcus Smart, DPOY
Top
Post Reply
335 posts