While the apparently parity of the first round was a refreshing and encouraging development for the NBA, we saw the teams ranked first, third, fourth and sixth in net efficiency during the regular season advance to the Conference Finals.

Many casual observers lament the absence of Cinderella stories in the NBA Playoffs, but the counterargument is that we almost always see the elite teams of the regular season advance to the final four. With a seven-game series, the NBA rewards teams that are either very good on both sides of the floor and/or are dominant on one of those sides.

Over the past 10 playoffs, the 2012 Boston Celtics are the only team to finish the regular season outside the top-10 in net efficiency to reach the Conference Finals.

The Celtics are an interesting outlier for two reasons:

1. An old, veteran team with title pedigree that paced themselves during a lockout-shortened regular season and were still the NBA's best on defense.

2. Derrick Rose's injury allowed Celtics to face the 76ers in the second round instead of the Bulls.

This type of relatively overwhelming evidence certainly calibrates expectations for how deep a playoff team is capable of advancing.

The Clippers beat the Warriors and then were defeated by a third-ranked Thunder team in a tight series.

The Blazers beat the Rockets and then were overwhelmed by the top-ranked Spurs int he second round.

The Raptors suffered a mild upset to the 19th ranked Brooklyn Nets, while the Suns narrowly missed the playoffs altogether.

Even before Andrew Bogut's season-ending injury, the Warriors didn't pass the eye-test for me the way the Clippers did and I was dismissive of their title aspirations due to the Superduperstar Theory. But they were certainly eligible to advance into the Conference Finals if they would have had homecourt advantage and two favorable matchups if Bogut remained healthy as the fifth best team in the regular season in terms of efficiency.

In terms of winning the actual championship, the Mavericks in 2011 were the lowest ranked efficiency team at No. 8. They were considered a darkhorse in the media when the playoffs began as the third seed since had won just one playoff series over the previous four seasons, but they clearly weren't too far off from the elite teams and took advantage of favorable matchups against the Blazers, Lakers, Thunder and Heat. 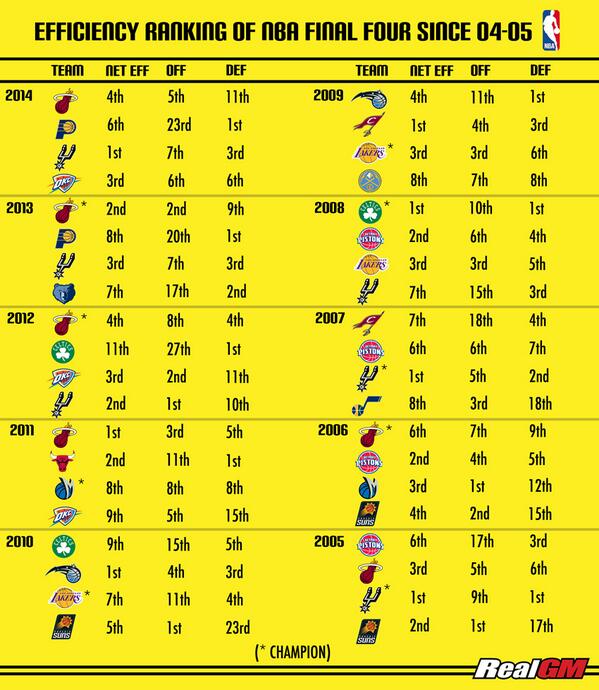 My knicks couldnt even crack this list ONE time! sheesh!
Top

In 7 of the past 10 years the top defensive team made the NBA Final Four which shoes how important lock down defense is.
Top
Post Reply
3 posts • Page 1 of 1