Some players are content to play the game, and live their private lives add ethically as they can. Others believe that their profile requires them to make a public stand for their beliefs, and try to drive wider societal change.

Without wanting to get extremely political, whose NBA player has been the most effective activist, either during their career, or after?

Sent from my SM-A305YN using Tapatalk

ElGee wrote:You, my friend, have shoved those words into my mouth, which is OK because I'm hungry.

KAJ/Russell got to be a contenders here too.

Yes. Could also look at Abdul-Rauf, John Ameachi, even Magic.

Sent from my SM-A305YN using Tapatalk

ElGee wrote:You, my friend, have shoved those words into my mouth, which is OK because I'm hungry.

I would have started with Mutumbo, or maybe Manute Bol, for their activism in their home countries.
Bradley Beal@RealDealBeal23
Because we can hoop!
Top

Depends what you mean.

Is it people who made overt political statements? In a particular direction? Or are good civic work. community involvement as valid an answer to what you are looking for - if so you could look at the J. Walter Kennedy Citizenship Award winners [only Mutombo has 2] though the writers voting work on incomplete information and Wikipedia intimates that it may primarily/only be financial ... "award is usually given to a person who made a substantial charitable contribution").
Do they have to have been impactful or is it more important that they are thoughtful (if so does it matter that the message is well articulated? Or is it bravery that is most important?
Is it including players making a stand for themselves and those following (e.g. early union leaders and any pro-black player activists)? Or should it be away from basketball ... should it have to be be non-self interested?
Is it mitigated by "bad" choices or decisions, either those that limit their impact by for instance putting out a hostile face to the world (or PR mistakes) or genuinely bad actions.

If you want more than names you need to articulate and guide the scope of the debate (even if just to say ultimately that "it's a free-for-all") so as to get a more meaningful discussion.
Top

Kareem gets this one I think.

I wanna mention MJ, he might've got in the game late but he came in strong flexing that black billionaire wealth.
"The hottest place in Hell is reserved for those who remain neutral in times of great moral conflict." - Martin Luther King
Top

Isn't Mike Conley fantastic when it comes to this aspect? or did I dream that up?

KAJ and Manute are great mentions

dice wrote:James Harden is currently in the same league as Michael Jordan as a scorer.

- He was for all intents and purposes the first star black basketball superstar. He was the first black player to lead his team to a college Championship, doing it back-to-back in 1955 and 1956.

- In 1959, Russell was the first NBA player to visit Africa while traveling with the US State Department. He conducted basketball clinics in Libya, Ehtiopia, Guinea, and Liberia. He also invested in a rubber plantation in Liberia shortly after this visit in order to create jobs.

- He marched with MLK at the 1963 March on Washington, he had spoken to MLK the night before. This is where MLK had the historic "I have a Dream" speech. One of the defining events of the Civil Rights Movement.

- In 1966, he became the first black head coach in American sports history, which is a truly underrated aspect of his career. Making him the literal "boss" of his white teammates was something that was a big friggin' deal. 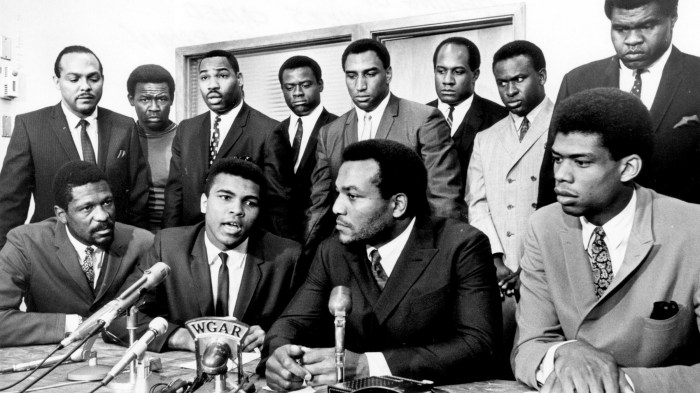 - This is a picture of The Cleveland Summit in 1967. This was an event where several black star athletes came out to meet with and eventually support Muhammad Ali on his conscientious objection of the Vietnam War which was a HUGE event at the time. The guys sitting down are Russell, Ali, Jim Brown, and Kareem; all of whom are truly GOAT candidates at their sport.


There are a lot of great answers to the question of who is the "best" activist. That depends on how you're defining "the best". Guys like Mutombo and Bol who were mentioned have made an unbelievable impact in Africa. Yao Ming learned from Mutombo is doing some great things himself. Jordan (Billionaire) and LeBron (On his way to Billionaire status) have accumulated so much wealth, that it has given them the ability to do things that others simply aren't financially capable of doing. There are also a lot of other guys under the radar that are making an impact everyday.

So I don't know about "the best". But IMO, Bill Russell was definitely "the most important" activist in NBA history when you look at his resume and the time period he was making his presence felt. Speaking with MLK before he deliver the "I Have A Dream" speech, sitting shoulder to shoulder with Ali as he made a statement about not fighting in the War, being the only non-baseball player to be a pallbearer at Jackie Robinson's funeral, being the first player to go to Africa and help plant the basketball seed in the continent and give the Mutombo and Bol's the opportunity to do what they did.

The man has just been making an impact for so damn long. The fact that Jackie Robinson himself felt like Russell was the guy who carried the torch from him is the thing that I can't get out of my head, just an incredible honor. I wish the average sports fan respected Bill Russell for who he truly is a little bit more than they do. It's a shame too because if he averaged 25 PPG but won 8 rings, he'd be given a lot more love. SMH. This dude is one of the absolute GOATs on and off the court.

Also, it needs to be said that Kareem Abdul-Jabbar (Lew Alcindor at the time) was 20 years old during that picture I posted above at The Cleveland Summit. It's 53 years later and this guy is still penning excellent pieces on his POV of the social issues we see today. Russell and Jim Brown were the Civil RIghts OGs of athletes so seeing them next to Ali wasn't a surprise, but seeing baby Lew Alcindor get a seat right next to them is pretty amazing.
Top

Bill Russell or Oscar Robertson. Honorable mention to Craig Hodges for what he did while not having the leverage of being a superstar player. Also shout out to Bill Bradley for becoming a senator and running a presidential campaign that was 20+ years ahead of what the Democratic Party was ready for.
Top

Oscar Robertson is up there, he changed the way sportsmen are were treated in America.
Top

Great, thoughtful, and intelligent article by Bill Russell. Games which Russell commentated are always special to me because he's such an astute and witty person. So I'm not surprised that he's an excellent writer too.

https://www.theplayerstribune.com/en-us/articles/bill-russell-nba-racial-injustice
"My career stats should have been way higher than they are." - MWP
"Indeed, Lebron is like a vampire sucking the blood from the youth to keep himself going." - milesfides
Top

Isn't this KAJ/Russell by default?
Top

Not necessarily. Depends on what you're looking at.

When I see the title, I thought everyone will talk about Abdul-Jabbar and Russell, but Big O has to be up there because he was the one led to the free agency style and he delivered. Abdul-Jabbar's and Russell's stances were more about social issues while Robertson's impact was more direct and obvious on a more particular matter.

I think it's not right to talk about greater or better about such a topic because there might be differences too big. Surely, the mentioned names do and will always stand out.
Top

That picture man. Yeah for me if you're talking American NBA players as activists, I think it's Russell and Kareem ahead of everyone else.

But I'll also say that this era has the possibility of producing someone who can surpass them. I'm not saying it's any kind of given, but I hear someone like Jaylen Brown speak and I think, "That guys smart enough to be a president and then some." In an earlier era the fac that he's unlikely to become a superstar would likely have kept him from having too much of a voice, but in this era it could be different.
Hey: With what's going on in the world, my fuse is shorter than it used to be, and it's leading my lose my cool and then go on self-imposed breaks from things (such as RealGM). Please try to keep it civil, and I'll be looking to do the same.
Top

Doctor MJ wrote:
But I'll also say that this era has the possibility of producing someone who can surpass them. I'm not saying it's any kind of given, but I hear someone like Jaylen Brown speak and I think, "That guys smart enough to be a president and then some." In an earlier era the fac that he's unlikely to become a superstar would likely have kept him from having too much of a voice, but in this era it could be different.

Yeah Jaylen has that Steve Kerr, Grant Hill, Shane Battier vibe about him where you just think this guy could do anything. And he's choosing to fight for racial justice. Glad you mentioned him as an up and comer.

Derek Webb wrote:I was wrong, I'm sorry, and I love you.

It feels like activism has gone different. Surely dedicated people still do physical things. In this internet / social media age though, using a platform can be just as important.

As an F1 one, even though I'm not a fan of him, I love how Hamilton's been using his platform and stature to speak his mind and reach many people. He's on his way to become the most successful driver and he's also very active about movement against racism. He's not making any excuses for his performance and success, he's doing both.
Top

John Thompson, who played for the Celtics even though he's more famous for coaching Georgetown
Top
Post Reply
21 posts