No predraft workouts will make it tough for a team to gamble early on Aleksej Pokusevski. He could be a lottery talent hidden by a lower-level setting overseas, a small sample size of games and a pandemic that's limited teams' ability to get a closer look.

He checks a rare and exciting mix of boxes with 7'0" size, unusual shooting fluidity for a player his size, flashy passing instincts and defensive activity. Pokusevski originally began drawing attention over the summer during the FIBA U18 European Championships, during which he averaged 1.5 threes, 3.7 assists and 4.0 blocks in 25.0 minutes per game.

Then he backed it up this season, albeit in Greece's second division through just 11 games, by racking up 17 threes, 34 assists and 20 blocks while playing 23.1 minutes per game. No college player on record has posted one three-pointer per game, a 25.0 assist percentage and an 8.0 block percentage, and he exceeded all three marks with room to spare.

It's understandable why some teams might not take his game or stats seriously. He's rail-thin up top. He shot 40.4 percent from the field this season and a combined 32.4 percent over the past two FIBA tournaments. He attempts some wild plays and doesn't always look ready to get low and defend away from the hoop.

But he's also the draft's youngest prospect, not turning 19 until Dec. 26. As long as his body and discipline improve under NBA coaching, Pokusevski's skill level and movement are too special not to translate with NBA teammates and spacing.

ALEKSEJ POKUSEVSKI
A lanky 7-footer who moves like a wing and passes like a guard, but needs to grow into his thin frame to thrive in the NBA

A Serbian-Greek center for Olympiacosâ second team, Pokusevski is a 7-footer with legitimately terrific shooting potential and terrific athleticism. He is seen as an interesting long-term play as the league continues to look for floor spacing from the frontcourt. He moves like a wing and has a 7-3 wingspan. He can pass the ball at a high level. In the second division Greek league, he averaged 10.8 points, 7.9 rebounds, 3.1 assists and over a steal and a block in just 23 minutes per game. At that level, heâs the most athletic player on the court and takes advantage of it, even if his relative inefficiency isnât terrific. But what does this very skinny big manâs game look like when heâs not the most athletic guy? Honestly, I have no idea, but I hope he goes to a situation that will develop him right so that we can find out.

Arguably the most intriguing player in this entire draft with potential to swing in both directions. 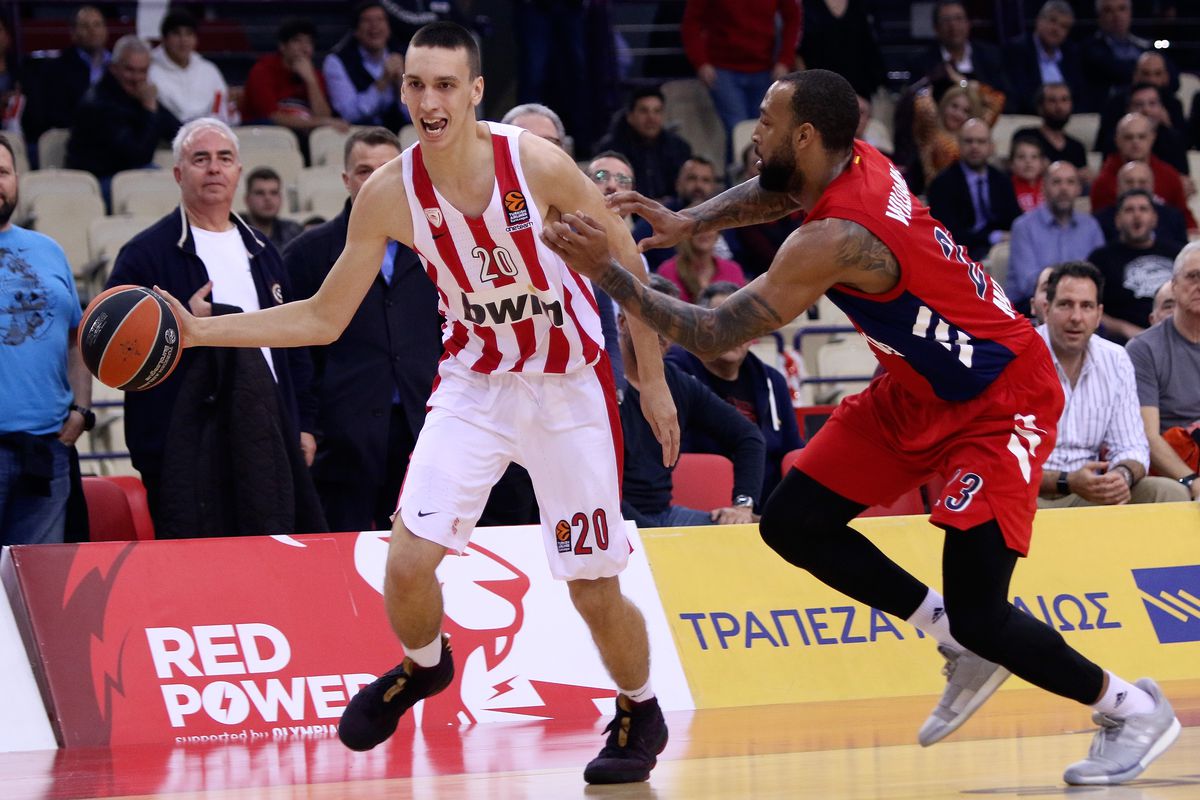 There may be no prospect more fascinating, more intriguing heading into the 2020 NBA Draft than 18 year old Serbian phenom Aleksej Pokusevski. Pokusevski stands at 7â, a wingspan of 7â3 and a standing reach of 9â1 (all measurements per ESPN). Heâs a little on the skinny side but we can get into that later. For now, just know the measurements and know theyâre obviously very important â one of the aspects that make Pokusevski an intriguing prospect.

Pokusevski is one of the most intriguing prospects of this entire draft but a lot of it obviously has to do with what he could be rather than what he is right now.

Offensively, you can see the appeal with Pokusevski: a âmodern NBA big manâ who loves to launch three-pointers who can make some plays (always nice to have a big man who can dabble in playmaking). Heâs not especially efficient on those shots right now but youâd perhaps take the gamble that one day he will be â being able to shoot over most players is a nice advantage to have and thereâs something to be said for it.
Pokusevski does have some good foot-speed given his size and he can do some work off of the dribble (again, whether this is translatable outside of the Greek second division remains to be seen and youâd probably have to lean with ânoâ right now) but the obvious area to invest in is shooting, over everything else. Absolutely over everything else.
If this work off of the dribble does end up translating, thatâs a big bonus and you can obviously raise Pokusevskiâs ceiling if that does end up being the case. But, right now, the more translatable aspect of his offense â and the focus â will be his shooting.

From a playmaking point of view, Pokusevski possesses a lovely touch, and his vision and IQ are to a high level already. I think itâs worth â whoever ends up selecting him â tapping into that aspect of his game and looking to develop that further. I really think thereâs something there worth investing in.

Defensively, Pokusevski obviously possesses size and length to cause disruption, as well as lateral quickness. The shot blocking potential is clear for everyone to see, both in a one-on-one scenario and as a help defender. Pokusevskiâs lateral quickness means he was able to guard multiple positions, ball-handlers included, in the Greek second diviosn. Whether that is something that stacks up long term against tougher opposition will be important to monitor.

Oftentimes the âmystery manâ designation feels clichÃ© and unhelpful; Pokusevski wears it particularly well. Heâs the youngest player in the draft and has unusual ball skills and shooting proficiency for someone his size, but he spent the past season in Greeceâs second division, which was not a particularly challenging level. His upside is tied more to the splash plays than the productivity, and his physical frailty is a stumbling block for some scouts, as heâll likely be ill-suited to playing on the interior. He has a clear knack for passing the ball, and thereâs potential for his shot-blocking to translate if he adds enough strength, but he also takes a lot of bad shots and may need more time than most to adjust from a physical and competitive perspective. Heâs likely to be drafted in the back half of the first round, and the expectation is that heâll come to the NBA immediately and spend the year taking advantage of the weight room and other resources.