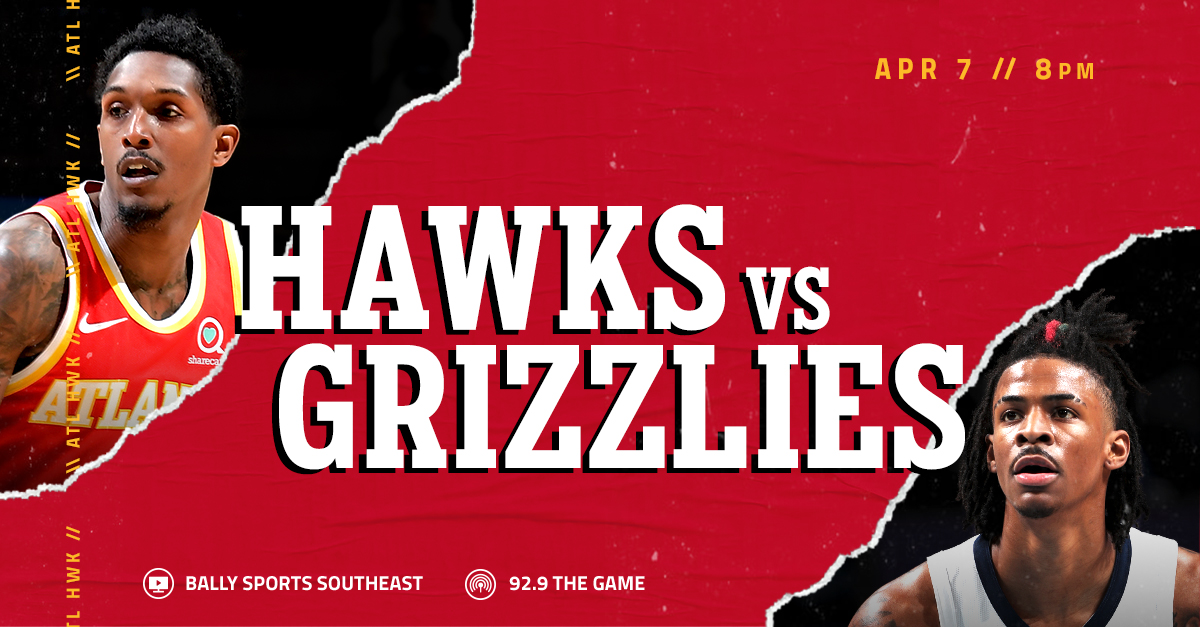 Things are heating up down south, as both the Grizzlies and Hawks are sizzling heading into tonightâs matchup.

The Hawks now sit alone atop the Southeast Division, while the Grizzlies are claiming the 8 spot in the West as their own right now.

The firing of Lloyd Pierce seems to have brought new life to the Hawks. He was replaced by Nate McMillan, and they have gone 13-4 since Pierceâs firing on March 1st, including winning their first 8 under McMillan. He was named the Eastern Conference Coach of the Month for his impressive March. Itâs also important to note, the Hawks have not lost at home since February 13th â thatâs 7 in a row.

Meanwhile, the Grizz have won 7 of their last 10 games. All three losses are to Utah, who have the best record in the league. Theyâve been able to do it while dealing with minor injuries to a lot of guys (Melton, Grayson, Clarke, Winslow) and of course still without Jaren Jackson Jr. Their star player, Ja Morant, has been able to contribute in many ways during their hot streak, whether its scoring or setting up his teammates to take over that role.

The Grizzlies are looking to snap the Hawks home win streak, while pushing their own win streak to four games.

Keys to the Game

Control the Pace
Believe it or not, these two teams are on the opposite ends when it comes to pace (Atlanta: 23rd & Memphis: 6th). For the Hawks, it has a lot to do with McMillan taking over. The Hawks are buying in on both ends, playing better defense and running more offensive sets. In fact, in the 34 games with Pierce as coach, they held their opponents under 100 only six times; in the 17 games with McMillan running the ship, theyâve done it four times, including twice under 90.

If the Grizzlies can force the issue and get out and running early, Atlanta may get uncomfortable and start forcing things, which could result in turnovers. The Grizzlies are second best in the league when it comes to forcing turnovers at 15.7 per game, and first in steals at 9.6 a game. I expect Ja to lead the way, and push the pace â he finished with 28 points and 7 assists in their previous meeting this season.

But, if the Hawks dictate the pace, the Grizzlies will pay. The Hawks are top 10 in offensive efficiency, 4th in free throw attempts (24.8), and tops in the league in free throws made (20.2).


Win the Perimeter
I donât know who had a better third quarter Tuesday night â the Hawks or Dillon Brooks. Atlanta went 11-of-11 from three point range, while Dillon Brooks poured in 23 points, knocking down 4-of-5 3âs in the third for the Grizz. Both of those performances allowed the respective teams to pull away in their games.

Both teams have guys that can knock it down from deep, so the Grizz will have to make sure Bogdonovic or Gallinari donât get into a rhythm and defend the arc as best as possible.

I just hope I live long enough to be around when the technology exists where you can reach through your TV and punch Grayson Allen in the face.

shakes0 wrote:I just hope I live long enough to be around when the technology exists where you can reach through your TV and punch Grayson Allen in the face.

Run it back.
Where the offseason has more buzz happens.
Top

MEM are really good Vs Eastern teams, so need to be careful
The last two games, they shot more than usual from 3pts, it may be the most important thing to defend tonight, certainly linked to their high assists number.

They need to hire a new podiatrist or something.
Where the offseason has more buzz happens.
Top

DirtybirdGA wrote:They need to hire a new podiatrist or something.

I guess Jonas will feast probably.
Where the offseason has more buzz happens.
Top

Just call the game right now, before more players come up with soreness.
Where the offseason has more buzz happens.
Top

What happened tonight?
I was unable to watch due to work.

HMFFL wrote:What happened tonight?
I was unable to watch due to work.

Only what was expected from a team on back-to-back with some many important players unavailable : first half with some hopes, before being completely dominated

I need to check one thing : is Chelsea Lane still here ? or are we just unlucky with injuries ?
Top

Yikes. Just throw this one in the garbage and get ready for the next one.
My eyes glaze over when reading alternative stat (not advanced stat) narratives that go many paragraphs long. If you can not make your point in 2 paragraphs it may not be a great point.