I know it's still raw but considering the next season will be in just a few short weeks...perhaps let's start game planning with a focus on the next season.

What do we want Ainge to do?

What do we want Steven's to change?

Any acquisitions or moves we hope the team makes?

Sent from my SM-G950U using Tapatalk

More generalities than specific actions but here are some of the things that I learned this past postseason:

â¢ Experience matters. Our roster was the 3rd youngest conference finalist in NBA history and it showed during crucial moments. It didn't help that our coaching staff are young too and were up against one of the most experienced/winningest active coaches in the league. People will say, "yeah but Miami leaned heavily on Bam and Herro too." True, but they also had Butler who's never missed a postseason, Iggy and Haslem who are now in their 6th Finals appearance, a handful of vets, and a coaching staff filled with ex-NBA players.

â¢ Don't think in terms of "championship windows". In today's NBA climate, I don't think windows exist anymore. And if they do, they're really, really short. Stars could jump ship and ask out. Injuries happen. Pandemics come out of nowhere and games are played in the bubble all of a sudden. With the emergence of Tatum, think "we can win now." Do what we can now. I'm not saying throw away the team's future to make a transaction that will barely move the needle. But every little bit helps. We probably don't go 7 games against Toronto or we probably would've won at least one of the first two ECF games if we had a capable replacement for Hayward on the bench.

â¢ In order for our ceiling to go even higher, Stevens has to take more risks and adapt an out-of-the-box thinking once in a while. And it starts in the regular season. More Timelord. More Langford. Injuries didn't help their cause, but we probably should've used our high potential guys more instead of Kanter and Semi. Let's see what we have in those young guys. Herro and Robinson showed confidence in the playoffs because they were given leeway to make mistakes in the regular season.

â¢ In connection to previous -- If our high-potential guys have glaring holes, find a way to plug them within the system. MIA's splash brothers are perceived defensive liabilities but they were able to stay on the floor because Heat hid them behind the zone. Have a (defensive/offensive) system that is flexible and adaptable. Sure, we were top 5 in both offense & defense in the regular season, but it barely mattered when we faced a matchup that took advantage of the weaknesses of our personnel. Even before our series began, I couldn't say enough about how much I loved Miami's motion offense and their versatility on defense. They got the most out of the players they had. That's one of the reasons they won against us with (not much) lesser talent and totally outclassed one of the best regular season teams (Bucks) in NBA history.
Top

Draft Maxey/Paul Reed
Trade Poirer
Trade Kanter if he opts in
Cut Semi/Javonte/Tacko
Let Wanamaker Walk
Try to convince a Vet big to sign for the MLE (Ibaka/Gasol/Favors/Baynes)
Explore Gordon Hayward trade options or an extension.
Sign a vet like Dudley who wouldnât have an issue with DNPâs
Top

As always, Bob Ryan makes some great points. The clock should start ticking on Brad, and Danny for the most part. Status quo should not be acceptable.
'Mate, you just dropped the World Cup'
-Steve Waugh, the Australian captain, after S. African fielder Herschelle Gibbs dropped his catch in the 1999 Cricket World Cup in England. Australia went on to win the World Cup.
Top

Remembering Robinson and herro and what they did makes me wish we got Davis Bertans from washington at the trade deadline. He is going to be a free agent this off season correct? I wonder what he is going to get paid. We need shooters like that off the bench and we need vet guys who've been there before. Danny green types. Guys that dont cost a lot of money but take your entire team to the next level.

As always, Bob Ryan makes some great points. The clock should start ticking on Brad, and Danny for the most part. Status quo should not be acceptable.

Long ago, Ryan campaigned successfully to get Tommy fired because he thought a Brad-like coach would be better.

At least, that's how Tommy told it in his late-80s autobiography.
Banned temporarily for, among other sins, being "Extremely Deviant".
Top

Also I dont know if this is anyone here but I saw this post and wanted to share it. 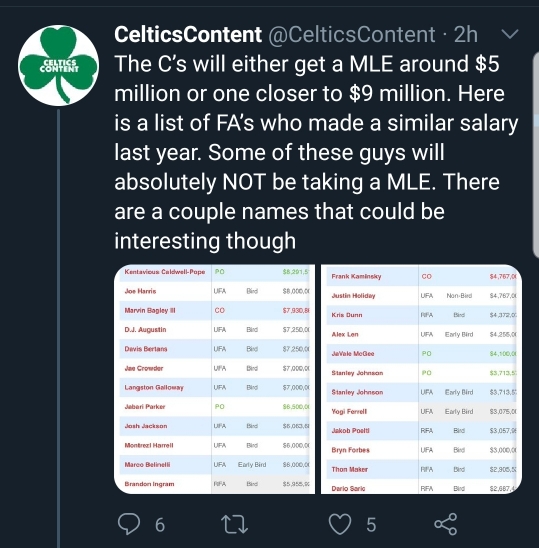 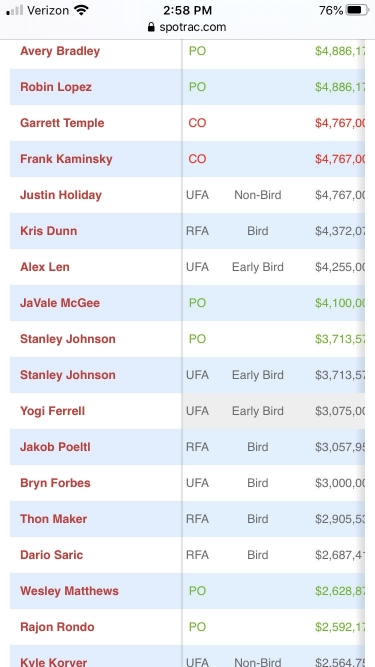 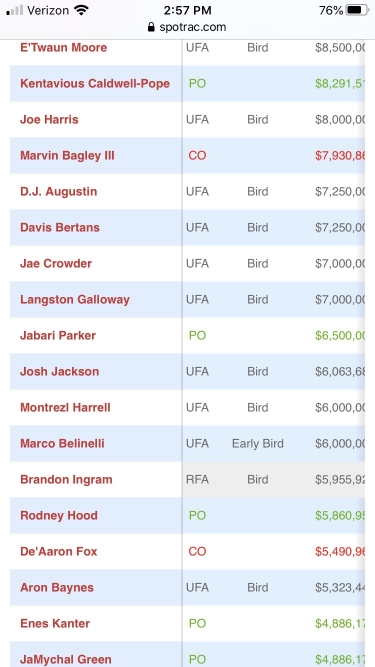 KGboss wrote:Also I dont know if this is anyone here but I saw this post and wanted to share it.

Sent from my SM-G950U using Tapatalk

Aron Baynes jumps out to me, off that list. He'll be 34 in Dec. But, I think that he still has a few years in him.
And surprisingly, he's not too bad from 3-pt land.
"It's not about me, it's about the Team."
~ Marcus Smart
Top

In the minds of the players, it seems that the team core is Tatum/Brown/Walker/Smart. Some of the reasons are minor, such as the Team USA bonding, but it also makes sense.

Unless Tatum and Brown would LIKE to move on from one or both of those guys, there's a strong presumption that the core group will be kept together.
Banned temporarily for, among other sins, being "Extremely Deviant".
Top

Garrett Temple, JaMychal Green, and Aron Baynes would be at the top of my FA wishlist.
Top

Wanamaker will likely stay on his 1.8 m qualifying offer. He gets alot of hate but he's a solid guy.

If they sign a better backup PG he'd be the 10th man in the rotation for cheap.
Top

Sadly, I don't think the Cs are on the top of Baynes's wishlist after how his stint in Boston ended.

If he was here and flashed all of australia in Bams face we would have won the series. Bam would have **** his pants.
Top

ConstableGeneva wrote:Garrett Temple, JaMychal Green, and Aron Baynes would be at the top of my FA wishlist.

Someone else gets to rep Temple.

Green is player option, but if you give him full tax-MLE, that's still more than his option.
Top 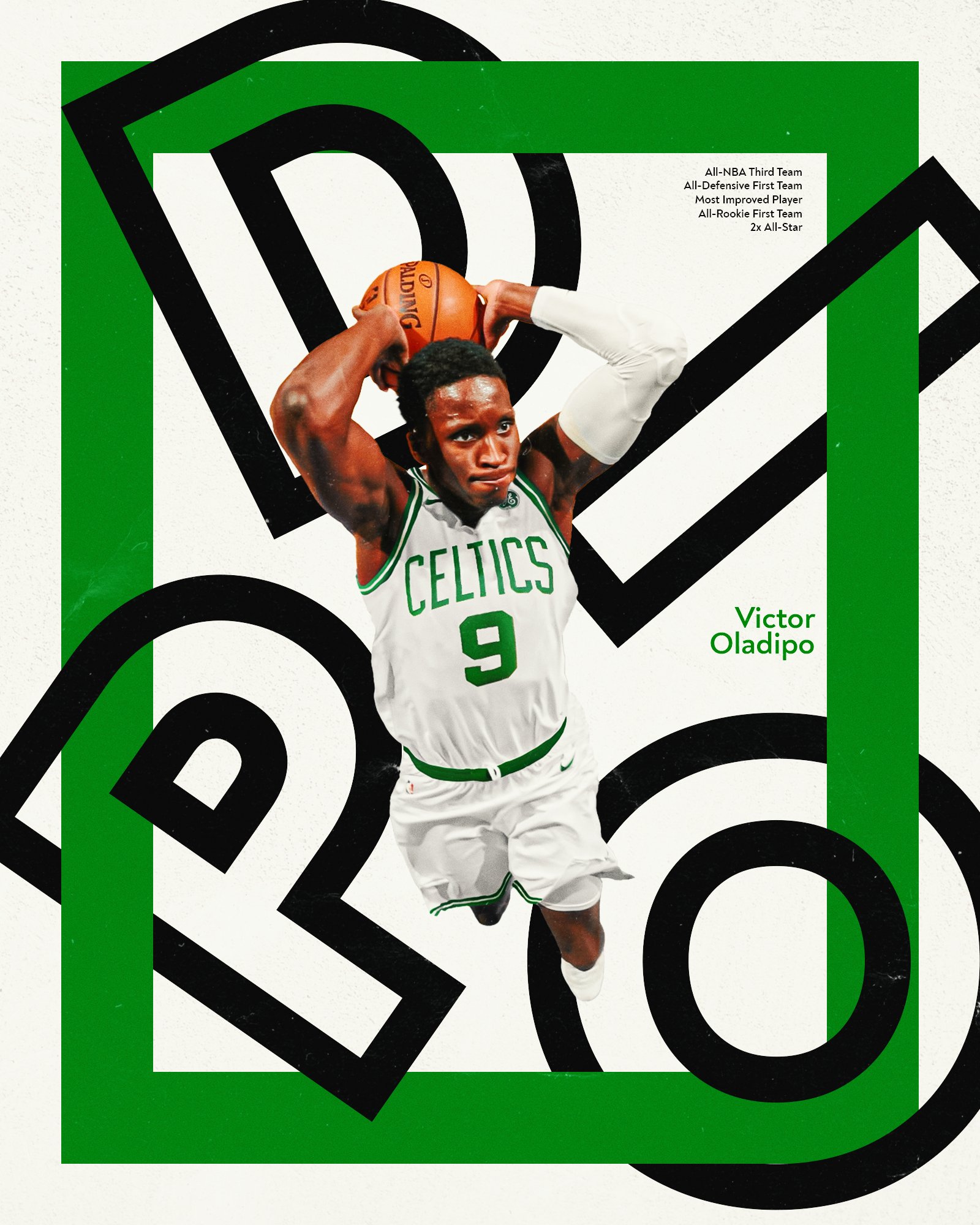 ConstableGeneva wrote:Garrett Temple, JaMychal Green, and Aron Baynes would be at the top of my FA wishlist.

Someone else gets to rep Temple.

Green is player option, but if you give him full tax-MLE, that's still more than his option.

1/3 of the team is Greens or Williamses.
Top


That can be read as anything from "Please keep me" to "I have decided to leave, but I'll miss you greatly".
Banned temporarily for, among other sins, being "Extremely Deviant".
Top
Locked
1963 posts