Mini-Bubbles and increasing the Roster to 19 or 20 players, are both great ideas.

Both mini-bubbles & 20 man rosters.
Or pause the season & reschedule the season to continue on or about March-April - play a total of 50 games - then begin the playoffs.
Otherwise, the season will be meaningless & ludicrous - with key players dropping out randomly for 10-14 days.
SamIam 2010: Truth's ability to play so incredibly efficiently is so UNDERAPPRECIATED. Bballcool 2012: Amazing how great Pierce has been for so long. Continues to defy age! KG 2013: P is original Celtic. Wherever he goes, we go. This is The Truth's house.
Top

The bubble worked last year because playoffs and only half the NBA was there. I don't see how they do something like that with only two courts and the entire NBA there unless they have games all day. Maybe they could have some mini bubble with certain teams for 2 weeks then just rotate them out?

Regardless rhey are just going to keep playing until someone gets really sick or until a bunch of the NBA players family members die from covid. I don't know what Silver expected to happen after watching the NFL struggle with this. There is no point of stopping and restarting the season either because the same thing is going to continue to happen.
*Insert witty signature here.*
Top

exculpatory wrote:Both mini-bubbles & 20 man rosters.
Or pause the season & reschedule the season to continue on or about March-April - play a total of 50 games - then begin the playoffs.
Otherwise, the season will be meaningless & ludicrous - with key players dropping out randomly for 10-14 days.

I think that we have to go with both Ideas. = Mini-Bubbles, 2-3 weeks on, 1 week off.
We also need to Increase to 20-Man Rosters, by way of increasing from 2 to 5 Two-Way players.

The G-League has only 18 Teams going to their own "Bubble" in Orlando.
There was no NBA Summer League, as well.

I beleive that adding the 3 additional players would be a solid idea.
Two-Way players can now play in up to 50 NBA Games, and have a Set Salary for the Season.
"It's not about me, it's about the Team."
~ Marcus Smart
Top

Don't see the bubble working for all 30 teams, maybe for some sort of playoffs only situation. Mini-bubbles create some issues in terms of the differences in strength of schedule depending which teams are put together. If a good team with minimal injuries and no infection issues gets put with multiple weaker teams, that is a pretty big advantage.

I think shutting it all down for several weeks, trying to get the player and official infections under control and then come back with a shorter season with stricter protocols, possibly with vaccinations of those involved being able to be carried out, is a smart option.
Top

If they aren't going to relax or all together drop the contact tracing they need to do bubbles. Otherwise too many games are gonna get canceled and it'll be a cluster F.
Show Love Spread Love
Top

I guess another way of looking at it would be the league has played by my rough calculation 150 games and has only had to postpone 2. We are 1/8 of the way through the season.
Show Love Spread Love
Top

Hopefully they predicted something like this happening so they had a plan for this eventuality. I really don't know the best course. You say shut it down for a week, but how many times can you do that? You have to do it every time a single game is postponed? Maybe they figured with 17 players per roster, it would be unlikely that a team wouldn't be able to field a full team. It's too bad they don't have the g-league bubble going right now that teams could draw from for 10-day contracts for the handful of times where teams have 10 or more guys injured/quarantined.

Manocad wrote:I have an engineering degree, an exceptionally high IQ, and can point to the exact location/area of any country on an unlabeled globe. 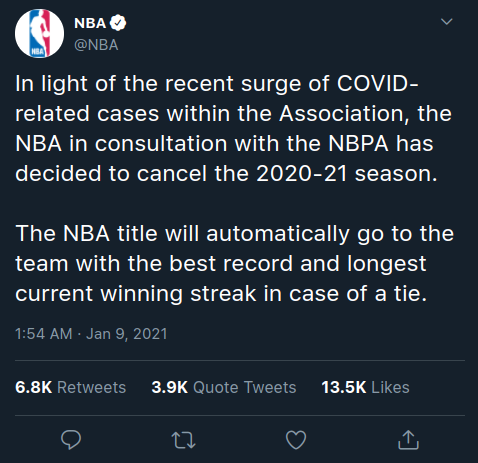 There were so many bad decisions made. The bubble was executed wonderfully, but they could not possibly have botched this season any worse. You basically take no precautions at all, don't expand rosters, and, worst of all, make a super compressed schedule with tons of back-to-backs and no rest so that the inevitably shortened rosters get run into the ground. Come on. I would love to hear the sunny, optimistic conversations that must have taken place to come up with this "plan".

I'm no epidemiologist obviously, but I'm guessing this thing is pretty well spread throughout the league by now, and we're only going to get more positives in the coming days and weeks. I'm not going to say, "Season is in jeopardy", because they absolutely can step back, reevaluate and reformulate the season, with a pause, fewer games, and more precautions. But I don't see any chance the season finishes as presently formulated.

They're going to have to give up on the 72 game pipe-dream, and build in some downtime to figure how how many positives there actually are.
Top

They need to take their wishful thinking caps off and get back in the bubble. Till the end of the playoffs.
Top

I think it's an overreaction to say the season is in peril right now.

But I think the league should strongly consider pausing games for the next ten days or so. Optimize protocols (i.e. redefine 'close contact' to better account for risk of transmission, limit exposure-related quarantines for those with antibodies to increase efficiency) and encourage players/staff to lay low while current outbreaks hopefully subside.
Top

increasing the roster doesn't help the problem of the NBA being a much diminished product if many top players are out. winning becomes just about having fewer top guys in covid protocol. of course health is always a variable but this year it's dominant and overriding, which is not what the L should be about.

i think mini-bubbles are the way to go. take a break now and start setting that up.
Top

Current COVID vaccinations are already taking place across the country, using the Pfizer-BioNTech and Moderna vaccines. States are starting with the nation's 21 million healthcare workers and 3 million residents of long-term care facilities.

Moncef Slaoui, chief advisor to the federal government's Operation Warp Speed, has estimated that 20 million Americans could get a COVID-19 shot before the end of 2020.

January/February 2021
The vaccines will continue to roll out to priority groups, including essential workers, immunocompromised people and the elderly. The process could speed up depending on the approval of more vaccines currently in Phase 3 trials, such as Oxford-AstraZeneca and Johnson and Johnson.

Advertisement
Spring/early summer 2021 Dr. Anthony Fauci, the nationâs top infectious disease expert, has said that average, healthy Americans can expect to get their first doses as early as April and through July.

Article is a little old since we missed the target for the end of 2020. That said I would guess the NBA falls into the essential non-front line portion of the population like construction workers. They are still leaving their houses for work. So maybe they could get vaccinated before the end of March. Do mini bubbles until then. If you rotate when teams are out of the bubble you could have a continuous stream of NBA games. One week 7 or 8 teams don't play. The next week it is a new 7 or 8 teams not playing.

Another consideration is will players need some time to recover after getting the vaccine. Anecdotal evidence so take it with a grain of salt but I've heard of people getting symptoms after the second injection. First injection seems to have less/no symptoms.
Show Love Spread Love
Top

I think you continue to stagger through the season by increasing roster sizes, and have some sort of a play-in for the last few playoff positions. Some teams are going to be luckier than others for Covid health so I think you accept that regular season standings are less accurate than usual, thus the play in.
Top

Poll doesn't have a NO option
Top
Post Reply
52 posts