Gallo's first year here was plagued by injuries. It was a real pain in the ass. But he bounced back from the glute issuess and had the best season of his career this past year. I don't think he got the credit he deserved from the talking heads, but he was consistently our best player. With 1 year left on his contract, it's hard to guess what lies ahead for him. I do wish him the best in OKC and in whatever the future holds for him. Hopefully, his injury woes are behind him and that he'll get to make the most of the remainder of his prime years.

I grew to be a fan of his in his Kentucky days, which says a lot for me because I cannot stand the Wildcats. I was ecstatic when we drafted him. He was cool, calm, and collected in college and carried that poise over into the pros. It was exciting to watch the flashes of what could become a future star in the league and the fact that he as a rookie helped lead this underdog team to the playoffs. I'm very high on his potential and I am looking forward to seeing him progress as a pro, even if it is from afar.

I can't speak for anyone else, but there are always players that you kind of fantasize about them finding their way back home. It doesn't typically happen, but sometimes you get a familiar face back (e.g. Barnes, Odom, Skinner, Mbah A Moute...kind of, etc.). I won't get my hopes up for that though. Best of wishes to Shai in OKC!

Iâm going to miss SGA so much I would of gave up more to Keep him. I appreciate Gallo and everything he did and tried to do he was a underrated stud last season
Top

I just hope we can get Shai back at some point on his career. I love that kid, hope the decision doesn't hurt him too much.
Top

Wonder if heâs awake and knows what happen
Top

SGA could be great. With a bad franchise im not so sure, but with OKC im pretty sure he'll become an all star.
Top

SGA could be great. With a bad franchise im not so sure, but with OKC im pretty sure he'll become an all star.

I literally hate that he was included in this deal.
Clever reactions to aggressive situations

All the Best, Shai!

All the Best, Shai!

I'm certainly going to miss Shai Gilgeous-Alexander and it was a bit of a shock to see him traded even if it was to make the Kawhi-and-PG13 duo a reality. In any case, I hope that he'll learn from Chris Paul during their time together in OKC. Eric Bledsoe supposedly benefited from his time as CP3's understudy during the early days of Lob City, so I'm hoping the same holds true for SGA.

After a couple of years of learning from the Point God and handling increased responsibilities as a Thunder, I hope to see him come back as a Clipper some day even more readily prepared to contribute to a championship ballclub.

Love for Shai's Future as Part of Dynamic Duo

Love for Shai's Future as Part of Dynamic Duo 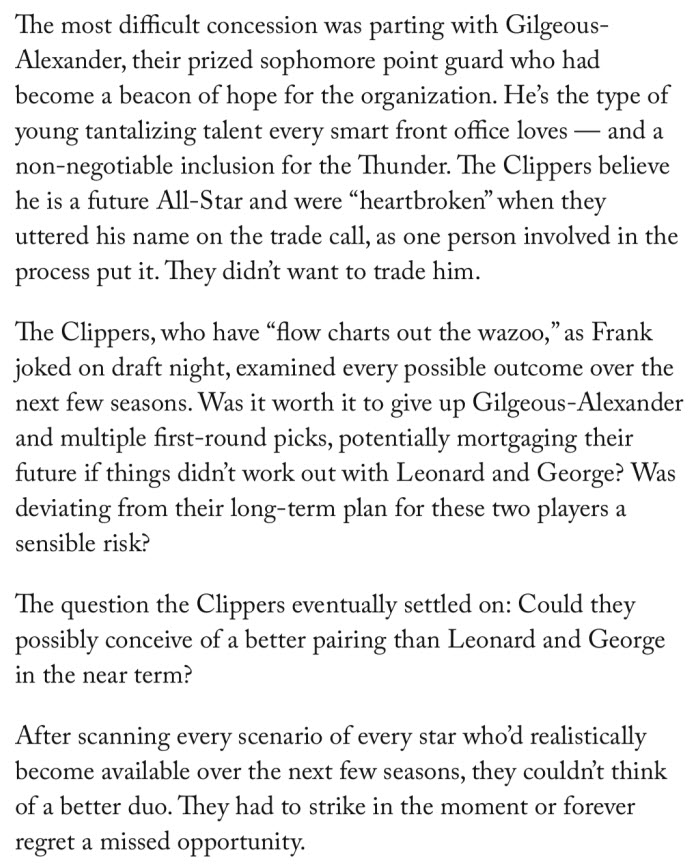 Count me as an OKC Thunders follower, if not an all-out fan.

Gallinari is a the kind of veteran player that could find himself on a contending team by season's end. Savvy, efficient, a real weapon.

Shai Gils is a Franchise corner-piece. It'll surprise me if he doesn't win the Most Improved Player award for 2020.
Top

I'm honestly holding out hope that Shai Gils will return to the Clippers someday years from now. I see it happening in my mind's eye.
Top

OKC @ LAC... What's the crowd reaction going to be like?
Top

Side note: Everyone is acting like OKC is going to be a wasteland next year. They've got a starting lineup that contains Adams, Gallo, SGA, and Chris Paul. They need frontcourt help, but they've got a lot of guards that can be used for (very) small ball or as trade chips with their approximately one zillion draft picks. That's not so terrible. And if I was a frontcourt guy that wanted to reestablish my NBA career, I'd go for OKC. Any vet min signing at SF and PF (and C) will get plenty of playing time.

Learning from the Point God

Learning from the Point God

I'm hopeful to see Shai Gilgeous-Alexander benefit from learning by watching Chris Paul much like Eric Bledsoe did but to a much larger degree and more sustained extent. I've always noted that Shai was lacking in the innate court-vision and playmaking I wanted out of a starting point guard but he certainly does practically everything else well including facilitating for teammates.

If he can incorporate some of CP3's instincts into his own game, SGA will be even better at facilitating plays for his teammates. His defense and shot are already on upward trajectories for improvement while he genuinely has an uncanny ability to get to the hole with crafty shiftiness.

The kid is already a promising prospect but let's hope he realizes his full potential.
LA Legends: Kershaw & Koufax_