Also FYI regarding the broadcast for tonight's game... 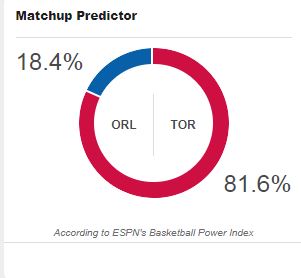 We have now come to a point in the season where we can no longer afford any type of mistakes. Toronto has been stout on the defensive end and has made life for our Orlando Magic absolutely miserable since Game 1 of this series. Their depth has been a major problem for us as they have the personnel to match up with our players defensively while being able to pose problems on the offensive end.

Despite all of this and how this series has played out, I still believe in this team and Coach Clifford. A lot has to happen for us to win game 5 and force a game 6 back at our gym but we have seen this Magic team defy the odds just to clinch a postseason berth. We certainly can get this game but the following will need to happen...

* Win the paint battle including getting to the FT line at a good rate
* Cannot lose the rebounding battle under no circumstance/own the defensive glass
* Isaac not getting in foul trouble and contributing in a big way on both ends
* Not getting beat by dribble penetration
* Getting Terrence Ross engaged immediately on offense once he is subbed in (5 FG attempts will not get it done)
* Having at least one of Siakam or Kawhi limited under any capacity
* Finally, need Vuc and Evan to return to form and provide that scoring punch we desperately need

If all that can play out, we will give ourselves a chance to remain in this series.

It's not much but I'm giving my energy to this team in the hopes that we have more basketball to play on Thursday...

Props to BrunoSkull once again...
Top

Several Magic players were visibly upset that they couldnât win in front of their fan base in Games 3 and 4, and theyâd like nothing more than to be able to play a Game 6 back in Orlando.

``Obviously, we canât go for a home run, and the focus should just be on us playing better, stop making mistakes and being more disciplined,ââ Fournier said.

make good passes, be in a good spot to receive them
Top

Hopefully I can find a stream with Fox Sports Florida, if we're gonna go out tonight, I at least want Steele and Turner on the call (Guokas was better).
Top

Be physical, rebound the ball. Push some people around if you have to.. donât be soft.
Top

Season on the line here. Let's see if they've got the mentality to fight back or not. Get into them, get aggressive, maybe throw another knee into Lowry's balls.
Top

Sad because I think this will be our last Magic game until October.
Top

WHY NOT US
my podcast, where i interview my friends for fun: https://soundcloud.com/user-593855127

Sent from my VS501 using RealGM mobile app
Top

Have fun tonight everyone. GooooooMagic!!!! Yaywooooohoooo!! Come on baby!
Top

YES!!! Bring the series back to Orlando please!
Top

Cliff is playing this Fournier, Vuc,Ross,AG, and DJ lineup too much. The Raptors must be shooting 80% against that lineup.

Discipline will be the absolute key for us tonight. Have to screen players correctly, have to make the correct reads, have to value the basketball. The live ball turnovers have killed us in this series.

Props to BrunoSkull once again...
Top

made it to realgm for a game finally, been on holidays and haven't been watching on a pc with 2 screens
Top
Post Reply
627 posts