rate_ wrote:I thought he was measured 6â9.5â in shoes: 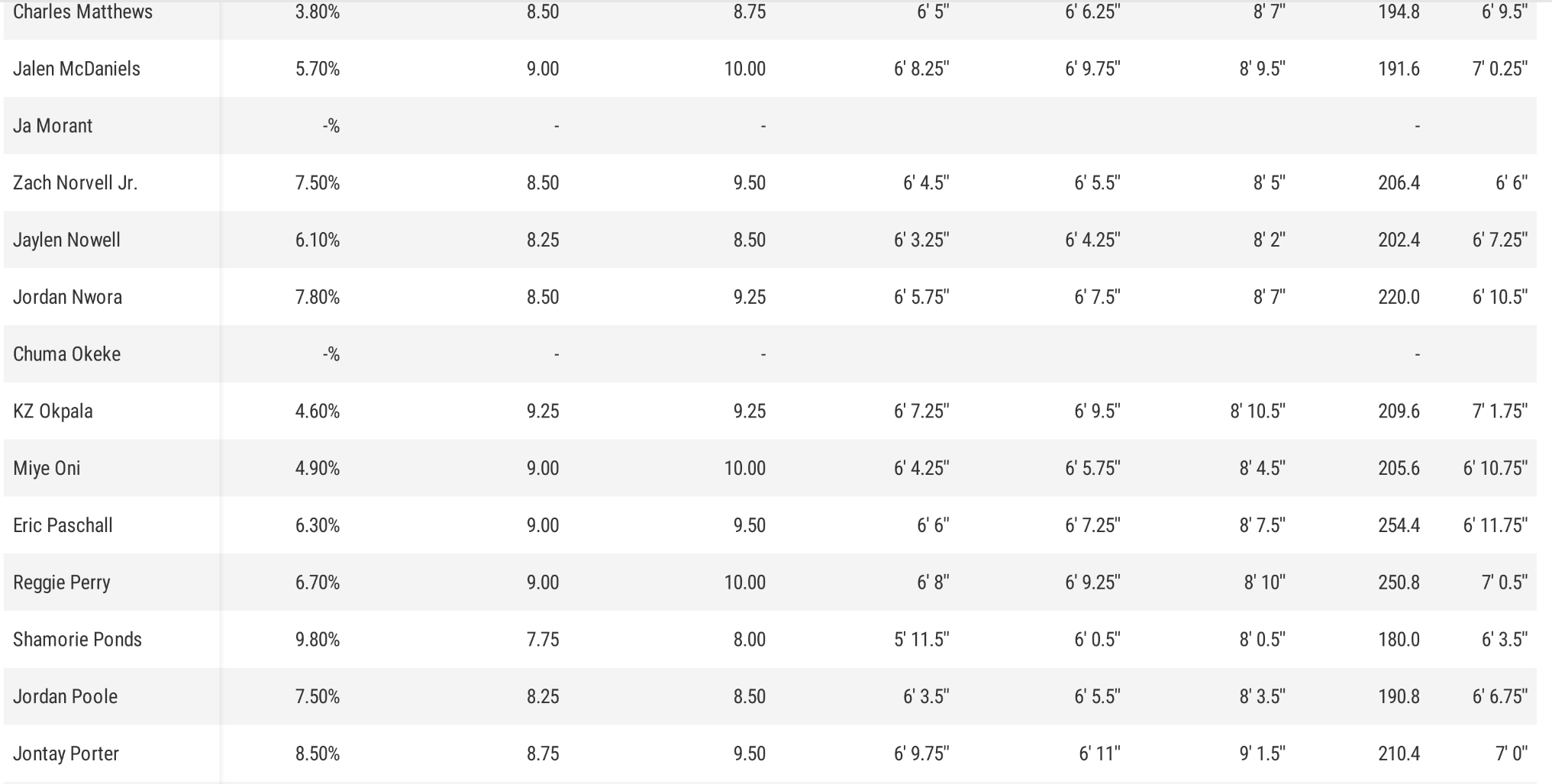 Bishop45 wrote:Last post on this dreariness before transitioning to 2020

Been too soft on post-Rondo C's, phuck em'

I feel you bish

Chalm Down wrote:14. Boston - PJ Washington. Could also see NAW going here. Or maybe even Herro, who everyone seems to be mocking here lately, but I just can't.

Bishop45 wrote:"Let Iggie start the season brehs, was the wors that could happen"

Guys spell it right, it is KD Okpala !!!

You are right, most shoes don't add that much (average is about 1.3 inches). But his shoes are not an exception. Here are the biggest differences of players' listed heights with and without shoes from Draft Combine since 2004 (when listing both heights became a thing):

Worked his arse off on that possession. If that's the kind of motor that "White Drip" intends on bringing game in, game out, Mia got themselves one heck of a player.
Top

So I actually kinda like the spelling Kezie better than KZ

I few observations on Herro after watching some full Kentucky games

Besides the obvious: Very competitive, good shooter with potential to be great shooter ( due to exceptional FT shooting), not afraid of the big moment

Gets really good elevation on his jumper, he is great at shooting off the dribble (a glaring weakness in our roster since other than Dion nobody can really do it) and very high BB IQ at relocating and finding open space in the court ala Steph curry and Ray Allen (this is actually his most impressive skill)

He will a good player after some adaptation period to NBA defenses and when he gets physical stronger and can absorb some contact.

Now to become a borderline star or all start ...

He needs to tighten his handle and show that he can create for others and he needs to improve shooting during hand offs on the move (like Reddick, Ellington and Korver)

His first step I am not really worried about... He seems athletic enough and when you are a good to great shooter you can do very well without an explosive first step.. Steph and Klay don't have great first steps and seem to get to the rim a lot
Top

Not comparing Herro to Steph or Klay.. but is fair to point out that some guys that are superstars in the league don't have elite athleticism
Top

I personally feel like we drafted Klay and Durant. Add those kind of guys to EJ (Rich), Kawhi (Winslow), and Kemp (Bam) and you've suddenly got a monster of a team.

Today, we do a five-minute shooting drill. For a while, the most anybody made ... I think Kyle Wiltjer made 73 one time. But the last couple times Coach [Tony] Barbee, stood next to Tyler so they kept throwing Tony the ball and he would throw it to him and he'd shoot and shoot and shoot so he was getting off 18-20 more shots. So the normal 65 to 67 ... he made 83 before Florida in five minutes. Can you imagine? Threes. Today, he made 95. Ninety five shots made in five minutes. Probably shoot 100 shots and missed five.

3.Did something in a Heat shooting drill that no other guard prospect brought in by the Heat has ever come close to doing.

âHe shot the ball extremely well,â Riley said of Herroâs workout at AmericanAirlines Arena. âBut I think he shot the ball extremely well in most of his workouts. But in one of our workouts, we have one particular shooting drill that not one of our guards in all the years that we brought them in for workouts even came close to what he did. It usually takes the Ray Allens of the world and the Wayne Ellingtons of the world to really, itâs a challenging three-point shooting drill, and he just buried it.â

Weaknesses: Far below NBA standard in regard to explosivenes and athleticism ... At 6-2, he's extremely small for the NBA shooting guard position, and it will likely keep him from being much of a defender at the next level ... Although he's playing point guard this year, he's not a natural point guard that an NBA team can rely on to run a team ... Struggles defensively getting around screens ... Can overshoot and rush into shots from time to time (vs. WV) ... Hasn't had to deal with getting benched due to poor performance (shooting) which has allowed him to shoot through any slumps. Will have to adjust to not being a volume shooter which could have an effect on his effectiveness ... Doesnât like when defenses are too physical with him ... Not a great finisher around the basket due to his size and physical attributes ... Makes some silly mistakes at the PG position. Needs to add some muscles to his upper body, but appears as though he'll always be skinny ...
Top

Bishop45 wrote:
Oh this is bad, can we not do this?

Oh I'm not trying to argue, just wanted to know what everyone considers a first step. I don't think each person here have the same meaning. I wouldn't call a step back thou a first step. I classify that as a second step.

When I use to coach, I had up too 3 steps in initial moves. I also had what I called zero step. Your footwork when you receive the ball to set up your first step. Which also correlated up too three dribble moves as well.

But just asking for definition purposes so we all on the same page.

By the way I got a cool story. Back in the early 90s, I was taught the James Harden step back along with the value of steps by a deaf player who was part of a deaf hooping league. He was an older guy and had some of the sickest handles. Tim Hardaway would come out and play him one on one for fun. Don't think I ever knew his real name. The kids had an obviously rude nickname for him. They called him Dah Dah. So that James Harden step back we refer it as the Dah Dah. And the first step you show the ball after a cross over between your legs, the second step you pulled the ball back behind your back on a step back to create space for a 3 point shot. Each step they would say Dah. Because that's the sound the deaf guy would make when he taught you the move. Dah Dah

I know it's mean, but a true story.

Might be the first story I have told here. Lol I known for telling a lot of stories. People make fun of it, calling me grandpa story time. Lol

Must confess. I only watched him play for about ten minutes this season. Time constraints. Had to fit time in for LIttle and Hunter. I should've afforded him some time. Boy is legit.